Janice Hengjaniceh@sph.com.sg@JaniceHengBT
Private-sector economists have sharply lowered their full-year growth forecast for Singapore to 0.6 per cent, down from an earlier 2.1 per cent prediction in June, in the Monetary Authority of Singapore's (MAS) quarterly survey of professional forecasters on Wednesday.
PHOTO: ST FILE

PRIVATE-SECTOR economists have sharply lowered their full-year growth forecast for Singapore to 0.6 per cent, down from an earlier 2.1 per cent prediction in June, in the Monetary Authority of Singapore's (MAS) quarterly survey of professional forecasters on Wednesday.

The downgrade is "hardly surprising given the escalation of the US-China trade conflict since the last survey", combined with much weaker than expected Q2 numbers, said Maybank Kim Eng economist Lee Ju Ye.

The lower forecast is also in line with the government's official forecast range of growth between zero and 1 per cent, which was lowered in August from the previous range of 1.5 to 2.5 per cent.

For the third quarter, the economists expect year-on-year growth to be 0.3 per cent. Maybank’s Ms Lee and senior economist Chua Hak Bin believe Singapore “may have narrowly dodged a technical recession in the third quarter”, as the manufacturing downturn eases on front-loading of trade orders – in anticipation of higher US tariffs – and services performance is bolstered by hospitality and finance.

Sent out in August, the survey received responses from 23 economists and analysts. It does not represent MAS's views or forecasts.

Based on economists' expectations, the most likely range for full-year growth is between 0.5 and 0.9 per cent, with a better-than-one-in-three chance (37.3 per cent) assigned to this. Coming second is the range of zero to 0.4 per cent, with a probability of around 30 per cent.

Non-oil domestic exports is expected to shrink 9.2 per cent, worsening from an earlier predicted fall of 2.1 per cent.

As for the labour market, respondents expect 2.3 per cent unemployment, up marginally from 2.2 per cent previously. 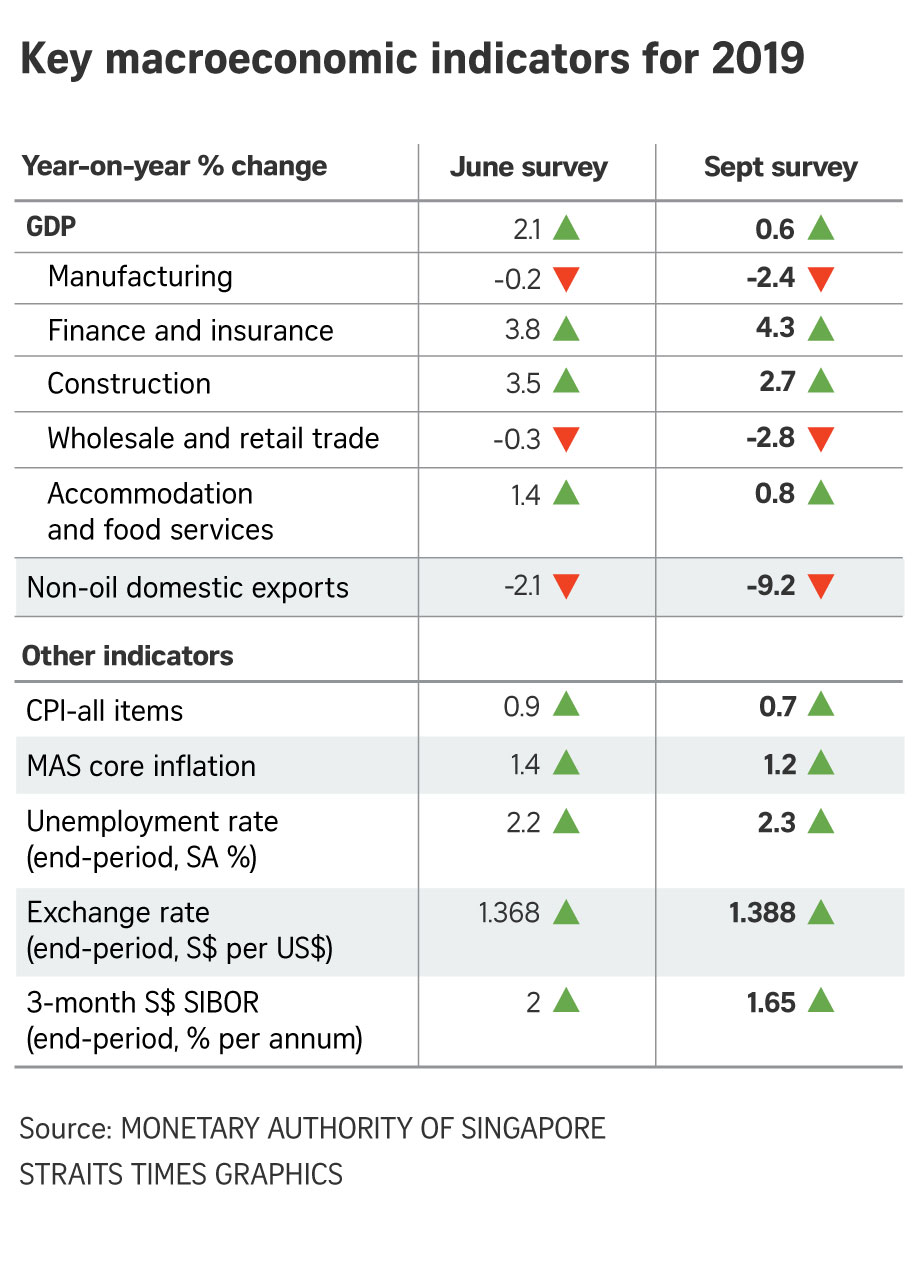 Further escalation of trade tensions and a slowdown in China remain the top two downside risks identified by respondents. Geopolitical risks in place such as Hong Kong and the Persian Gulf have also come to the fore, cited by nearly two in five respondents, up from just 5.9 per cent in June.

Easing of trade tensions remains the top upside risk, but fewer respondents now see that as likely, compared to June. Fiscal stimulus was the second most likely upside risk, cited by more than two in five, up from 17.6 per cent previously.