Analysts do not see hard landing ahead, looks to growth-friendly initiatives in Budget
Annabeth Leowleowhma@sph.com.sg@AnnabethLeowBT
Singapore's economy is cooling but a sharp crash is not expected, watchers have said, even as they look to next month's Budget for relief amid a hazy outlook for monetary policy.
PHOTO: ST FILE

SINGAPORE'S economy is cooling but a sharp crash is not expected, watchers have said, even as they look to next month's Budget for relief amid a hazy outlook for monetary policy.

The economy chalked year-on-year growth of 2.2 per cent in the final quarter of 2018, according to flash estimates on Wednesday - easing a tad from 2.3 per cent the quarter before.

This would take full-year gross domestic product (GDP) growth to 3.3 per cent, as announced by Prime Minister Lee Hsien Loong earlier this week.

Over S$5.5b in Jobs Support Scheme payouts to be disbursed from Oct 29

Wednesday's flash data, which fell short of a Bloomberg survey average of 2.5 per cent, was based largely on information from October and November. A final figure is expected next month.

But Vishnu Varathan, Mizuho Bank's head of economics and strategy for Asia and Oceania, said that the Ministry of Trade and Industry's advance GDP estimate is conservative and likely to be revised upwards.

Neither does it throw a wrench in this year's growth projections, despite significant downside risks, Mr Varathan told The Business Times. While the economy is expected to expand at a slower pace than before, "it is not necessarily set for a hard landing".

Even amid ominous mutterings about fallout from the US-China trade war, the Singapore government's forecast for 2019 is for GDP growth of between 1.5 per cent and 3.5 per cent.

Some analysts are crossing their fingers for growth-friendly policy initiatives in next month's Budget, which is slated to come out on Feb 18. 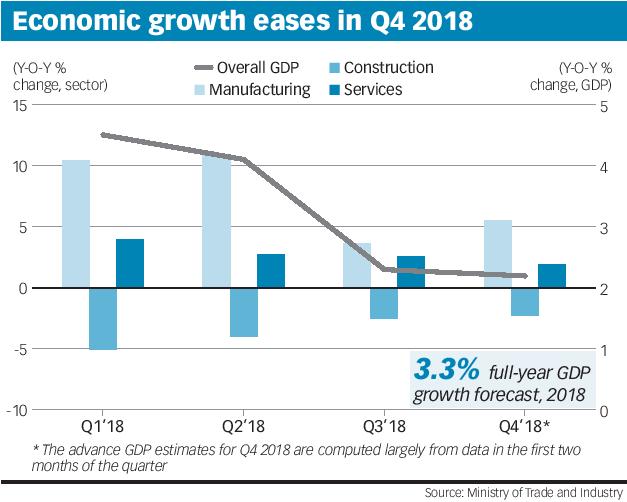 Maybank Kim Eng economists Chua Hak Bin and Lee Ju Ye wrote in a note that the Budget is likely to have new measures to support the economy, while Selena Ling, OCBC Bank's head of treasury research and strategy, said the Budget could make room for "a slightly looser fiscal stance, if need be".

Economists have been weighing the possibility of tweaks to monetary policy, as a climate of global tightening looms overhead. The Monetary Authority of Singapore (MAS) moved twice last year for a "modest and gradual" appreciation of the Singdollar after six years without a hike.

"So long as the bigger picture is one of gradual slowdown... the MAS will not beat a hasty retreat on policy," said Mizuho's Mr Varathan.

Meanwhile, economists at both Maybank Kim Eng and ING think that the MAS will leave monetary policy untouched at its April meeting.

Besides the inflation question, analysts are wringing their hands over the impact of global trade woes on the Singapore economy as well.

Growth in the manufacturing sector picked up to 5.5 per cent on the year before in the fourth quarter, from 3.7 per cent in the previous three months, on higher output in biomedical manufacturing and electronics.

But observers noted that the year-on-year growth may have stemmed from a low base effect and front-loading of exports ahead of planned US tariffs on Chinese goods in March.

On a quarterly, seasonally adjusted basis, manufacturing actually shrank by 8.7 per cent, against 3.1 per cent growth in the third quarter.

And, if the US tariffs do take effect, UOB senior economist Alvin Liew said that a hit to manufacturing in the second quarter "is likely to be magnified and translate to a weaker manufacturing growth outlook" for the full year.

The sector could also feel the pinch from a downturn in electronics and a slowdown in Chinese growth.

Meanwhile, year-on-year expansion in services cooled to 1.9 per cent in the fourth quarter, down from 2.6 per cent in the quarter before, while growth eased on a quarterly basis from 5.3 per cent to 3.7 per cent.

The construction contraction proved intractable, with the sector shrinking by 2.2 per cent on weaker public-sector works. Still, the size of decline has been coming down over the year, with DBS economist Irvin Seah among those suggesting that the recession has bottomed out.

"Impetus in the coming quarters will come from infrastructure projects, but this will be juxtaposed with a slowdown in residential construction activity," he said.

Singapore shares slip at Thursday's open after weak lead from US; STI down 0.4%

SINGAPORE stocks started Thursday on a softer note, after a lacklustre lead from Wall Street as investors mull the...

Quibi streaming service to shut down

[SAN FRANCISCO] Quibi on Wednesday announced it is pulling the plug on the "quick bites" television service aimed at...

CDL director Kwek Leng Peck quits over differences with board