Currently, Singapore's pension system remains the best in Asia - for the 10th consecutive year - and ranks 7th globally, said MMGPI on Monday in its 2018 review.

Measuring 34 pension systems, the Index shows that the Netherlands and Denmark (with scores of 80.3 and 80.2 respectively) both offer A-Grade world class retirement income systems with good benefits, clearly demonstrating their preparedness for tomorrow's ageing world, it said.

Singapore scored a B grade, climbing to 70.4 in 2018 from 69.4 in 2017 - which itself was an improvement from the 67.0 in 2016 - due to improvements in the sustainability sub-index. In the sub-indices, the Republic scored a C+ for adequacy, B for sustainability and A for integrity.

Singapore's overall B grade - shared with nations including Finland, Australia and Norway - is defined as "a system that has a sound structure, with many good features, but has some areas for improvement that differentiates it from an A-grade system".

"Having one of the most developed pension schemes in Asia, Singapore has continued to make improvements through the CPF by providing more flexibility to its members," said Mercer's director of strategic research, growth markets, Garry Hawker.

Singapore's retirement income system is based mainly on the Central Provident Fund which covers all employed Singaporean residents and permanent residents (PRs).

"The overall index value for the Singaporean system could be further increased by reducing the barriers to establishing tax-approved group corporate retirement plans; opening CPF to non-permanent residents; and increasing the age at which CPF members can access their savings that are set aside for retirement, as life expectancies rise," said Mr Hawker.

Ageing populations continue to pose a challenge to governments worldwide, with policymakers struggling to balance between sustainability of the pension system and adequacy for their retirees, said MMGPI. 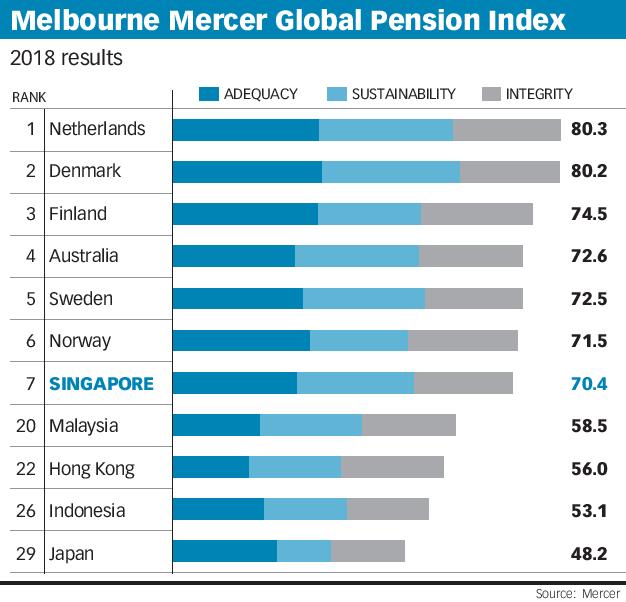 According to the Department of Statistics, there were 1,200 Singaporeans aged 100 and above as of last June, from 50 in 1990, so the number of centenarians among Singaporeans has surged by 24 times over that period.

The resident workforce comprising Singaporeans and permanent residents is 2.27 million.

Pension reform is a lively topic in Singapore, and the government is keen to improve the sustainability and adequacy of the CPF, said Taimur Baig, DBS Bank group research chief economist.

"Raising the age of first withdrawal from CPF is not a particularly radical concept, and can certainly be considered," he said.

In many countries around the world, as life expectancy has risen, so has the age of pension, he said. The US, for example, has a lower life expectancy than Singapore, but a higher full benefit age (65) for social security.

"In our view, key would be to communicate the desirability of such reforms to the public transparently and incorporate Singapore-specific considerations first," said Mr Baig.

On the issue of including non-PRs into the CPF system, note that Singapore already provides substantial tax-benefit to non-PRs for retirement savings through the Supplementary Retirement Scheme, said Mr Baig.

[SINGAPORE] The number of visitors to Singapore plummeted to a historic low of 748 in April, the first full month...

THE following companies saw new developments that may affect trading of their shares on Friday:

PROPERTY giant CapitaLand has proposed a scrip dividend scheme which will allow shareholders to receive their cash...

Tokyo: Stocks open lower ahead of US jobs data

[TOKYO] Tokyo stocks opened lower on Friday, with investors wary after recent rises and ahead of the release of a...