Singapore, Asia investors bank on US stocks in Q2 as others scale down

In the mood for buying

WHILE the rest of the world was winding down its shopping spree on Wall Street in the April-June quarter, Singapore investors, along with other major Asian investors, seemed to start picking up bargains.

Meanwhile, their American counterparts have stepped up spending in stock markets outside the United States, including the Singapore Exchange, according to the latest data released by the US Treasury.

Asian investors, led by Singaporeans, were still dumping stocks listed on the New York Stock Exchange in the first quarter when other foreign investors were snapping them up.

They switched to buying mode only in the next quarter, paying a net US$1.23 billion for their purchases in a quarter that saw the Standard & Poor's 500 index jump 3.1 per cent despite some mixed economic data and uncertainty over whether the US government could push through its fiscally expansive policies. While the acquisitions didn't amount to much, they still represented a turnaround.

Asian investors unloaded a net US$2.04 billion in US stocks in the first quarter. Singapore investors alone disposed of a net US$2.86 billion, the single biggest Asian chunk sold that quarter.

In the second quarter, they bought a net US$1.35 billion of US stocks - then the third biggest Asian investment after the South Koreans (US$2.13 billion) and Japanese (US$1.45 billion).

But some long-time Asian investors in the US market still hadn't kicked the selling habit. The US Treasury's second-quarter data shows Hong Kongers purchased a net US$782 million and the Taiwanese a net US$287 million in US stocks. 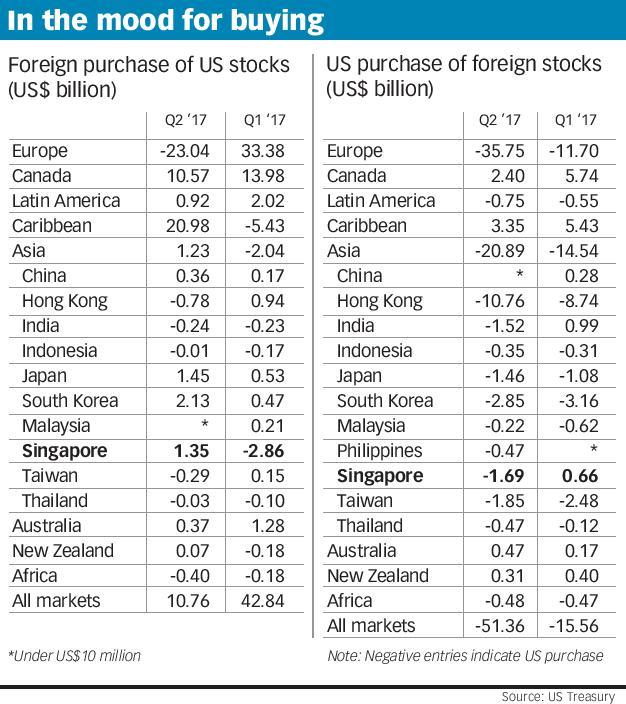 Foreign investors overall were buying more US stocks than they sold in the second quarter, netting US$10.76 billion in purchases. But they were buying less than they did in the previous quarter, when a net US$42.84 billion was spent.

In contrast, US investors were bigger spenders in foreign stock markets in the April-June quarter when the MSCI World index rose 4.2 per cent in US dollar terms. The investors splurged a net US$51.36 billion on stocks listed outside the US, up from US$15.56 billion in the first quarter.

US investors in the quarter were especially partial to Asian stocks, fanned by a still-hot Chinese economy. Two-fifths of the money they invested globally - US$20.89 billion - was in Asian stock markets as Chinese equities made robust gains and the Japanese shares, after softening in the early part of April, trended upwards to end 6.8 per cent higher.

In Singapore, the Americans acquired US$1.69 billion SGX-listed shares in the second quarter, after having sold US$662 million during January-March.

[NEW YORK] Goldman Sachs reported another blowout quarter on Tuesday to conclude a highly profitable 2020 despite...

YouTube bans Trump for another week over inauguration violence concerns

[SAN FRANCISCO] YouTube said on Tuesday it was extending a one-week ban on outgoing US President Donald Trump...

[NEW YORK] Vogue will publish a limited edition of its latest issue featuring a different photo of Vice-President-...

Biden arrives at air base near Washington on eve of inauguration

[WASHINGTON] Joe Biden arrived at Joint Base Andrews near Washington on Tuesday, returning to the capital on the eve...