Increase from current 7% to help fund future expenditure, especially in healthcare costs due to an ageing population
Siow Li Senlisen@sph.com.sg@SiowLiSenBT
The government plans to raise GST by two percentage points, from 7 per cent to 9 per cent, some time in the period from 2021 to 2025, said Finance Minister Heng Swee Keat in his Monday Budget speech.
PHOTO: LIN ZHAOWEI FOR THE STRAITS TIMES

AS widely expected, the government announced plans to increase the GST to 9 per cent from the current 7 per cent - but this will only kick in, at the earliest, in three years' time - keeping its 2015 promise that it has sufficient resources to meet spending needs till 2020.

The government plans to raise GST by two percentage points, from 7 per cent to 9 per cent, some time in the period from 2021 to 2025, said Finance Minister Heng Swee Keat in his Monday Budget speech.

"The exact timing will depend on the state of the economy, how much our expenditures grow, and how buoyant our existing taxes are," he said.

"But I expect that we will need to do so earlier rather than later in the period," he added.

GST increases will be implemented progressively.

The government will continue to absorb GST on subsidised education and healthcare.

The permanent GST Voucher (GSTV) scheme, currently up to S$300, will be enhanced when the GST is increased, to provide more help to lower-income households and seniors, he said.

Today, about S$800 million per year is disbursed from the GSTV Fund. This year, the government will top up S$2 billion to the GSTV Fund to support these payments, he said.

There will also be an offset package to help Singaporeans adjust to the GST increase. 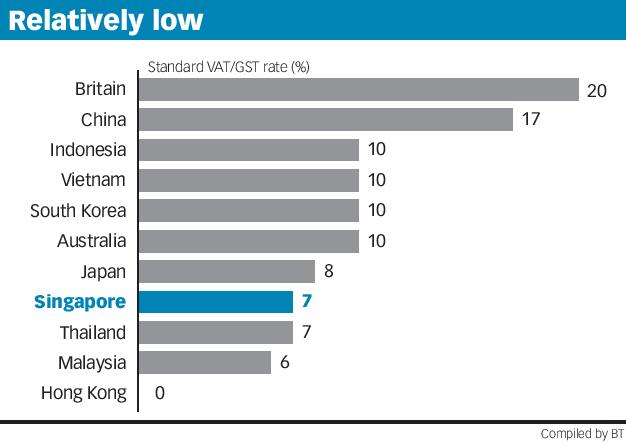 The GST increase is necessary because even after exploring various options to manage future expenditures through prudent spending, saving and borrowing for infrastructure, there is still a gap, Mr Heng said.

He highlighted the rapid spending increases especially in healthcare due to the ageing population.

Spending on healthcare has more than doubled since the start of this decade to an estimated S$10.2 billion in FY2018 fom S$3.9 billion in FY2011. This increase went into building and operating more hospitals and other healthcare facilities, and enhancing healthcare subsidies.

By 2030, the total number of elderly will increase by about 450,000, to 900,000. In the next five years, the government will build six more general and community hospitals, four new polyclinics, and more nursing homes and eldercare centres.

Within the next decade, healthcare spending is expected to overtake education. In FY2018, education spending is estimated at S$12.8 billion.

Average annual healthcare spending is expected to rise from 2.2 per cent of GDP today to almost 3 per cent of GDP over the next decade. This is an increase of nearly 0.8 percentage point of GDP, or about $3.6 billion.

The increase in revenue in the government coffers from the GST hike will translate to almost 0.7 per cent of GDP per year.

One percentage point increase in the GST will bring in S$1.6 billion and 2 percentage points will result in S$3.2 billion, estimated Lam Kok Shang, KPMG Singapore, head of indirect tax.

A GST offset package of at least S$4 billion could be announced at a later stage, said Irvin Seah, DBS Bank senior economist.

Mr Lam noted that the lead time given to the GST increase reinforces the government's reputation as a "serious government".

"If they don't do as they said they would, if GST goes up before 2020, it would have indicated fiscal planning of the government had gone awry," said Mr Lam.

In 2015, Deputy Prime Minister Tharman Shanmugaratnam said the revenue measures the government had already undertaken would provide sufficiently for increased spending planned until 2020.

"It's a brilliant move... bad news is delivered now but it's not going to hurt yet and it may be tweaked," said sociologist Paulin Straughan on the future GST increase.

Ms Straughan who is also Singapore Management University dean of students said GST is a fairer tax but she worries about the impact on the middle class as the offset GSTV voucher uses a "crude" measure based on housing type.

At 19 per cent of GDP, estimated overall government expenditure in FY2018 is leaner than most developed economies, he said.

Last year, it announced a permanent 2 per cent downward adjustment to the budget caps of Ministries and Organs of State.

This year, Ministries' budget growth will be further moderated; Ministries' block budgets presently are allowed to grow at 0.4 times of GDP growth, this will reduce to 0.3 times from FY2019.

For more stories, visit bt.sg/budget18 Brought to you by