SINGAPORE'S core inflation in August eased slightly from its decade-low point in July but remained in negative territory for the seventh straight month.

The figure, which strips out private transport and accommodation costs, rose to -0.3 per cent year on year, up marginally from the -0.4 per cent seen in July 2020, according to data released by the Department of Statistics on Wednesday. (see amendment note)

In a joint statement, the Monetary Authority of Singapore (MAS) and the Ministry of Trade and Industry (MTI) attributed the moderation in the pace of decline to smaller falls in the costs of services, retail and other goods, as well as electricity and gas.

Headline inflation, which includes all items, came in at -0.4 per cent year on year in August, unchanged from the previous month. This is because the sharper fall in private transport costs was offset by a slower pace of decline in the core consumer price index (CPI), MAS and MTI said.

Both sets of figures came in 0.1 percentage point better than what private sector economists had expected, according to a Bloomberg poll.

In the quarters ahead, external sources of inflation are likely to remain benign amid weak global demand conditions, MAS and MTI said.

This stems from low oil prices and a cap on international food commodity price increases due to improved supply chain conditions, the authorities said.

Domestically, consumer demand is expected to remain dampened due to the weak economic sentiment, while the accumulation of spare capacity in the economy will curb overall cost pressures, they said.

MAS and MTI are expecting both core and headline inflation to average between -1 and zero per cent in 2020.

Brian Tan, regional economist at Barclays Bank, said they are expecting full-year core inflation to decline by 0.2 per cent, given that core CPI fell by 0.2 per cent year on year in the first eight months of the year.

“With labour market conditions weakening notably in Q2 and likely to continue deteriorating, demand-pull inflation pressures should remain soft through the rest of this year,” Mr Tan said.

Maybank Kim Eng economists said while they expect inflation to stay negative for the rest of the year, the pace of decline will ease as services and retail costs gradually normalise.

They have also raised their full-year forecast from -0.4 to -0.2 per cent, given the “higher-than-expected set of numbers in recent months”. However, they noted that this could be partly due to the unavailable prices in hard hit services sectors such as holiday expenses and airfares.

Economists are also expecting the MAS to maintain its policy of a neutral bias, or a zero appreciation in the Singapore Dollar Nominal Effective Exchange Rate, at its next policy review slated for October.

Barclay’s Mr Tan said: “The downturn remains largely domestic in nature, supporting the view that fiscal policy should continue to be the more effective response, and there are signs of a gradual recovery.” 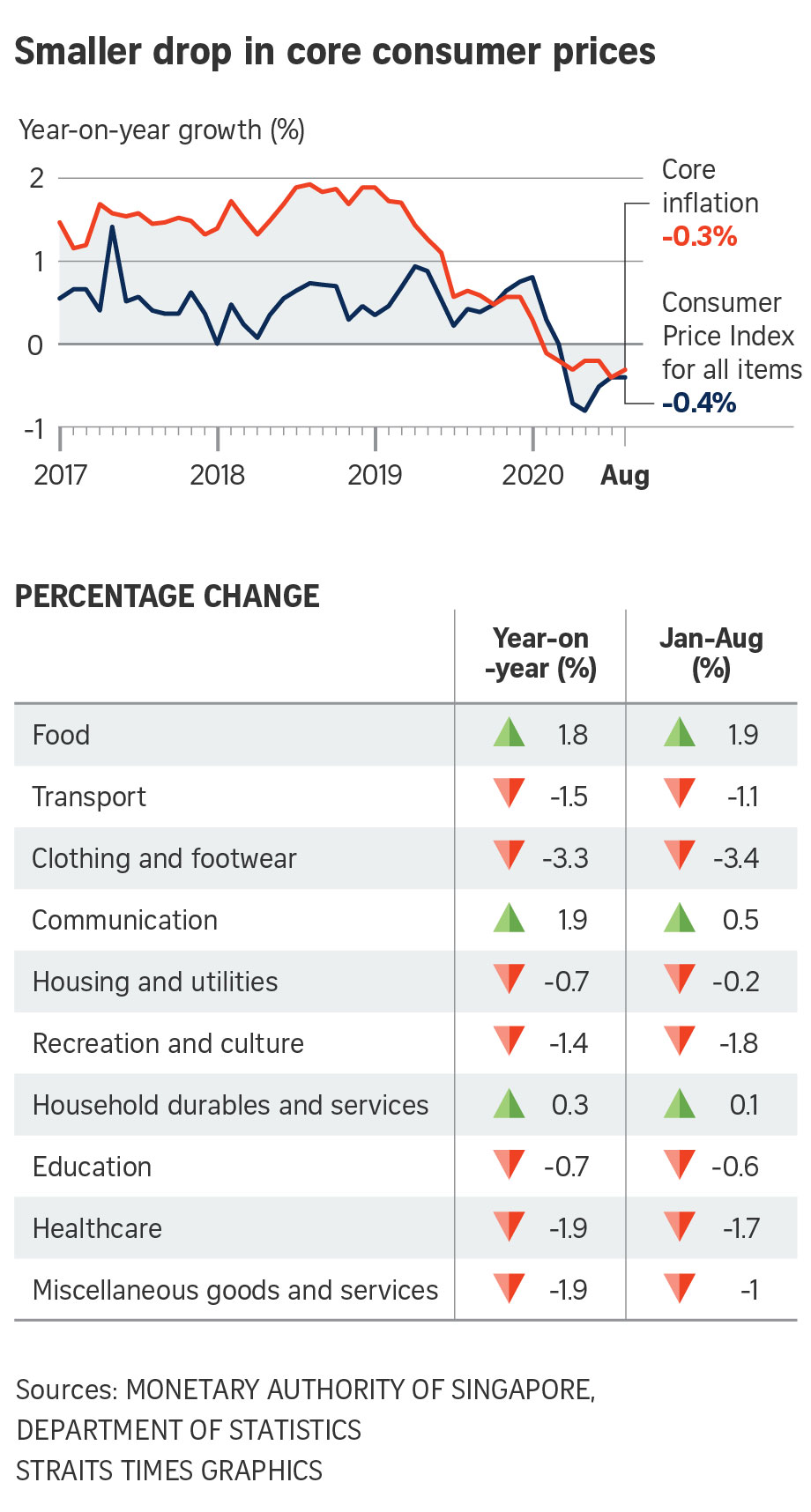 Clothing and footwear rose to -3.3 per cent in August from -4.1 per cent in the previous month.

Housing and utilities came in at -0.7 per cent, up from the preceding month's -0.8 per cent.

Recreation and culture logged -1.4 per cent, rising from -2.3 per cent in July.

Miscellaneous goods, which includes personal care, alcohol and other services, went up to -1.9 per cent from July's -1.7 per cent.

Healthcare and education inflation remained flat at -1.9 per cent and -0.7 per cent respectively. (see amendment note)

Transport slipped further to -1.5 per cent in August, from -1.4 per cent in the previous month.

Amendment note: A previous version of the article stated education inflation had dropped to -0.7 per cent from July's -0.6 per cent when it had in fact remained flat at -0.7 per cent.

Taxpayer losses could hit £23b on UK's Covid loans

21 new Covid-19 cases in Singapore, including three in the community

US tech venture investing gets a boost from pandemic

[OAKLAND] Brian Bell, chief executive of Split Software, was in a meeting pitching investors when California...

[SINGAPORE] Swiss renewable energy producer Axpo will open an office in Singapore at the end of this year to expand...

THE Centre for Seniors (CFS) has partnered with mobile app job portal FastJobs to improve job matching for senior...

[SINGAPORE] Suspension of late payment charges on Housing Board (HDB) mortgage arrears will be further extended to...