Economists, reacting to the Ministry of Trade and Industry's advance estimates, say recovery is likely to be slow, and that slump may last 4 quarters
Janice Hengjaniceh@sph.com.sg@JaniceHengBT
On a quarter-on-quarter, seasonally adjusted annualised basis, Singapore's economy shrank an unprecedented 41.2 per cent in Q2, worsening from Q1's 3.3 per cent fall.
PHOTO: ST FILE

SINGAPORE entered what might be its deepest - if not longest - recession in the second quarter, as gross domestic product (GDP) plummeted a record 12.6 per cent year on year due to Covid-19 measures and weak external demand, Ministry of Trade and Industry (MTI) advance estimates showed on Tuesday.

Though Q2 might mark a trough, recovery is likely to be slow, said economists, who expect the recession to last four quarters - as long as the one in the global financial crisis. Still, most expect the Monetary Authority of Singapore (MAS) to keep foreign exchange policy unchanged in October.

The Q2 figure was worse than economists' expectations of a 10.5 per cent fall, and much worse than Q1's revised 0.3 per cent contraction.

The official forecast is for a full-year fall of 7 per cent to 4 per cent, though Citi economists Kit Wei Zheng and Ang Kai Wei expect this to be downgraded or narrowed when fuller Q2 estimates are out in August.

On a quarter-on-quarter, seasonally adjusted annualised basis, the economy shrank an unprecedented 41.2 per cent in Q2, worsening from Q1's 3.3 per cent fall. With two straight quarters of quarter-on-quarter and year-on-year contraction, Singapore has entered both a technical and full-blown recession.

"Circuit-breaker" measures were in place from April 7 to June 1, with only some activities resuming in the first phase of reopening.

The manufacturing sector was the only one to see positive growth in Q2, up 2.5 per cent year on year, though slowing from 8.2 per cent in Q1. This was due mainly to a surge in output in biomedical manufacturing. Weak external demand and disruptions during the "circuit breaker" weighed on output in chemicals, transport engineering and general manufacturing.

Quarter to quarter, manufacturing shrank 23.1 per cent, a sharp reversal from Q1's 45.5 per cent growth. Still, HSBC Global Research Asia economist Yun Liu points to manufacturing as "the bright spot", adding that "the ongoing rebound in the electronics sector has been encouraging - and it may continue". 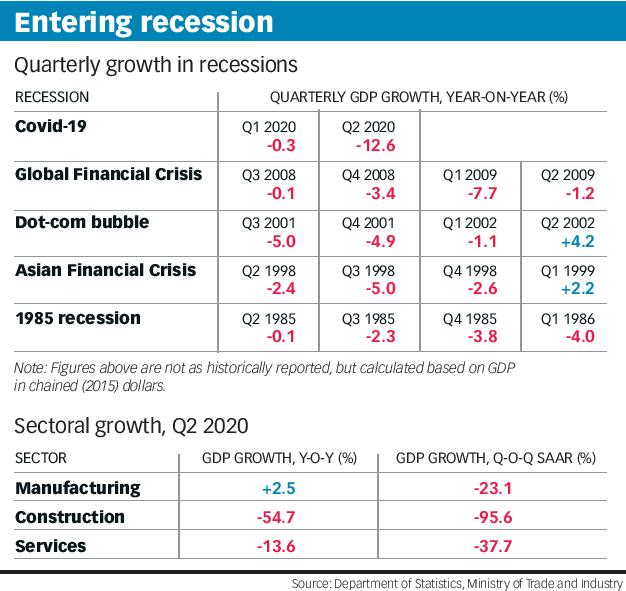 OCBC Bank chief economist Selena Ling similarly noted that domestic manufacturing and electronics Purchasing Managers' Index readings improved in May and June, "reflecting that global supply chain disruptions have abated". But the test will be the recovery in private consumption and services, she added.

Vishnu Varathan, Mizuho Bank's head of economics and strategy, said: "Crucially, even with a widely expected bottoming in Q2, the worry is about a long, hard slog back."

As an atypical, services-led downturn, recovery "may be dictated by unfamiliar dynamics that are frustratingly reliant on both external demand ... as well as sub-par domestic demand recovery that is hampered by 'new norms' of stricter distancing and containment", he added.

Construction was hardest hit by "circuit-breaker" measures, contracting 54.7 per cent year on year, compared to Q1's 1.1 per cent fall. With most activities having stopped in Q2, and manpower disruptions due to Covid-19 measures, the sector shrank 95.6 per cent quarter to quarter, far worse than Q1's 12.2 per cent fall.

The advance estimates are based largely on data from April and May. With Phase Two of reopening having begun earlier than expected on June 19, the Q2 figure is expected to be revised upward in the August estimate, said DBS economist Irvin Seah.

The impact for the government's stimulus packages "has yet to be fully captured in today's figures", he added, with the full multiplier effect to be felt in the coming months.

Calling the Q2 figures expected, given Covid-19 measures and global disruptions, Minister for Trade and Industry Chan Chun Sing said in a Facebook post: "The road to recovery in the months ahead will be challenging." He gave assurances that the government would continue to support businesses and workers.

Though economists agree that Q2 marks a trough, they caution that recovery will be slow and uneven.

They expect smaller year-on-year GDP contractions of 7 per cent in Q3 and 4 per cent in Q4, for a U-shaped recovery with positive growth in Q1 2021, but GDP returning to pre-pandemic levels only in 2022.

With four quarters of year-on-year contraction, this recession would be of similar duration to those of 1985 and 2008, they added. OCBC's Ms Ling similarly sees it taking three to four quarters to turn the corner.

HSBC's Ms Liu, who sees a sharp 7.6 per cent rebound in 2021, thanks in part to strong non-oil domestic export growth, said: "From the outset this will be a short recession."

Generous fiscal support "should prevent a sharp deterioration in the labour market as seen elsewhere in the world", she added.

Still, some deterioration is likely. Nomura economists Euben Paracuelles and Charnon Boonnuch expect the unemployment rate to worsen to 4.5 per cent in the second half, from 2.4 per cent in Q1. Mr Seah warns of "a jobless recovery, due to the lag between labour market and the growth cycle".

In a Facebook post on the figures, Member of Parliament and National Trades Union Congress assistant secretary-general Patrick Tay said: "Ahead of the second-quarter labour market figures, which will be released end of this month, I expect there will be a sharp spike in retrenchments and unemployment figures as well."

Dismal figures notwithstanding, the broad expectation is for the MAS to leave foreign-exchange policy settings unchanged in October. Barclays economist Brian Tan said: "The MAS appears to view fiscal policy as being notably more effective at addressing the economic effects of the Covid-19 outbreak and the 'circuit breaker' compared to FX policy."

But the Citi economists do not rule out the chance that the MAS will re-centre the policy band again, seeing a 30 to 40 per cent chance of that.

US to ease water rules after Trump's shower moan

[WASHINGTON] The US government is looking at easing regulations on shower fittings following complaints from...

[HONG KONG] Hong Kong shares finished with small losses Thursday as concerns about the lack of progress in US...

JTC has awarded the tender for an industrial site at Jalan Papan (Plot 1) to SH M&E Engineering for about S$7.9...

102 new Covid-19 cases in Singapore, including 5 in the community and 6 imported

[SINGAPORE] There were 102 new coronavirus cases confirmed as of Thursday noon (Aug 13), taking Singapore's total to...

DoorDash faces injunction to reclassify some workers as employees