Vivien Shiaovshiao@sph.com.sg@VivienShiaoBT
Singapore’s manufacturing sector put up a dismal showing in the first month of 2019, clocking its first contraction in output since December 2017.
PHOTO: REUTERS

SINGAPORE’S manufacturing sector put up a dismal showing in the first month of 2019, clocking its first contraction in output since December 2017.

Industrial production declined by 3.1 per cent in January from a year ago, down from a revised growth of 1.7 per cent in December 2018, according to the latest data from the Singapore Economic Development Board (EDB). This, however, was exactly in line with economist expectations.

But on a seasonally adjusted month-on-month basis, manufacturing output ticked up 0.9 per cent in January. With biomedical manufacturing stripped out, output dipped 0.4 per cent.

The two clusters that declined in January were electronics and precision engineering – previously the key economic drivers of growth in the manufacturing sector.

Electronics output fell 13.7 per cent in January, with all segments registering a lower level of production, with the exception of the other electronic modules & components segment.

Precision engineering decreased 15.7 per cent, on the back of a decline in the machinery & systems segment which fell 20.8 per cent due to lower production of semiconductor equipment. The precision modules & components segment declined 7.4 per cent, with lower output of optical instruments and dies, moulds, tools, jigs & fixtures. 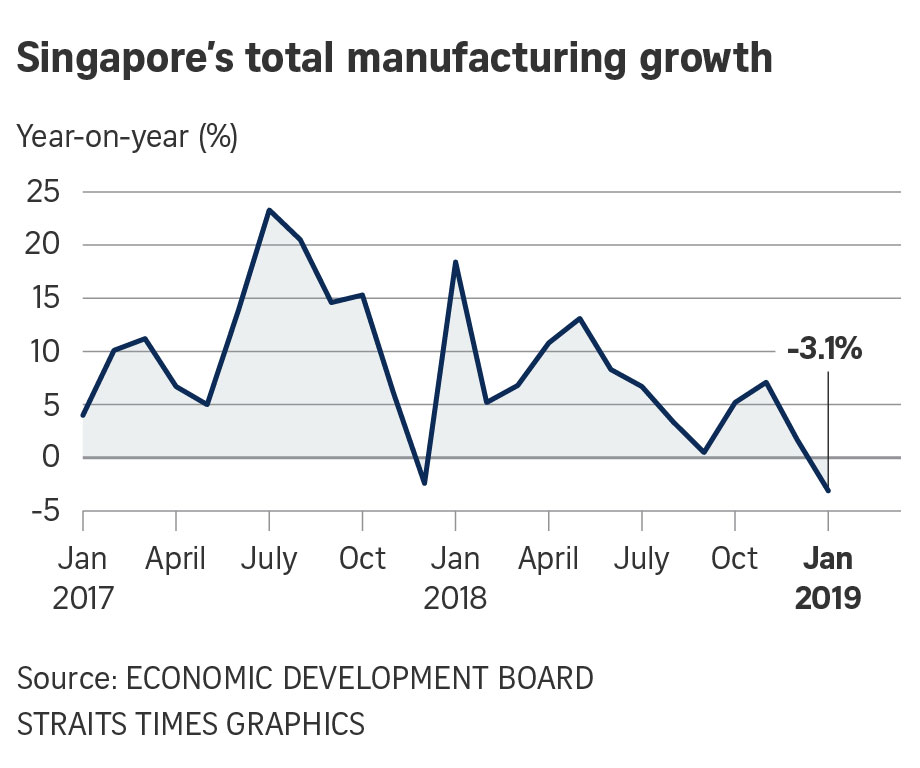 The transport engineering cluster outperformed the rest in January, with an increase of 20.2 per cent. All segments recorded output growth, with the marine & offshore engineering segment expanding 26.9 per cent, lifted by a higher level of work done in offshore projects and shipbuilding & repairing. The aerospace segment also grew 17.4 per cent with more repair and maintenance activities from commercial airlines.

Biomedical manufacturing continued to put up a credible performance, going up by 10 per cent. This comes on the back of pharmaceuticals, which expanded 13.5 per cent with higher production of active pharmaceutical ingredients and biological products. The medical technology segment rose 1.5 per cent on sustained export demand.

Output of the general manufacturing cluster climbed 3.2 per cent, reversing from contraction mode in the past few months. The miscellaneous industries segment went up 5.8 per cent with higher production of batteries and structural metal products while the food, beverages & tobacco segment went up 4.6 per cent on the back of festive demand. This helped to make up for the output of the printing segment, which fell 11.5 per cent.

Chemicals output rose 2.0 per cent, lifted by the other chemicals segment which expanded 18.2 per cent, on account of higher production of fragrances. However, it was dragged down by the petrochemicals and specialties segments, which contracted 1.8 per cent and 3.2 per cent respectively.

India's tech hub, other towns back in lockdown amid Covid-19 surge

US inflation spikes 0.6% in June on rising gas prices