Ann Williamsann@sph.com.sg
Inflations remained mild in 2017 despite stronger economic growth with consumer prices finishing off the year by edging up less than expected in December.
PHOTO: ST FILE

INFLATION remained mild in 2017 despite stronger economic growth with consumer prices finishing off the year by edging up less than expected in December.

For the whole of last year, consumer prices rose 0.6 per cent, reversing two consecutive years of negative inflation, while core inflation - which strips out accommodation and private road transport costs - rose to 1.5 per cent from 0.9 per cent in 2016.

The consumer price index - the main measure of inflation - edged up 0.4 per cent in December compared with the same month a year earlier, according to Department of Statistics data released on Tuesday.

This was below the preceding month's inflation rate of 0.6 per cent and smaller than economists' estimates of a 0.5 per cent rise.

This was largely on account of lower private road transport and services inflation, the Monetary Authority of Singapore (MAS) and the Ministry of Trade & Industry (MTI) said in a joint release on Tuesday.

Private road transport inflation slowed to 2.6 per cent in December from 4.1 per cent the month before. This was mainly due to the dissipation of base effects associated with the increase in parking fees in December 2016, as well as a smaller year-ago increase in petrol prices.

Services inflation fell to 1.3 per cent last month from 1.6 per cent in November, largely reflecting a decline in airfares and holiday expenses, in addition to a smaller year-ago increase in telecommunication services fees.

The cost of accommodation fell by 3.8 per cent in December, moderating from the 3.9 per cent decline in the previous month, as the fall in housing rentals eased.

Core inflation eased to 1.3 per cent in December from 1.5 per cent in the previous month, mainly due to lower services inflation.

For 2018, core inflation is expected to stay in the 1-2 per cent, while the overall inflation is projected to come in at zero to 1 per cent, MAS and MTI said. 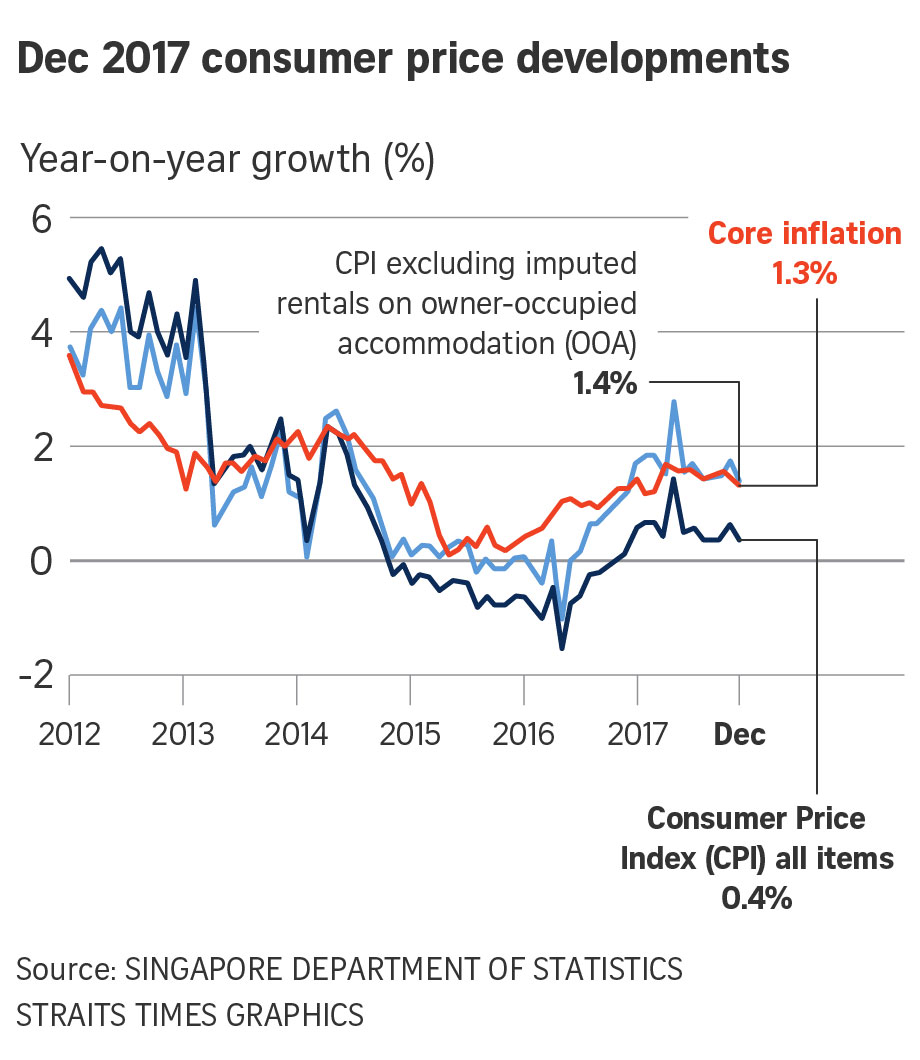 On the local front, cost pressures in the economy should remain relatively restrained, they said. The gradual absorption of previously accumulated slack in the job market is expected to temper wage pressures in the near term, while non-labour costs such as commercial and retail rentals will continue to be subdued.

As for imported inflation, this is likely to rise mildly, with oil prices seen as increasing only slightly in 2018 amid ample supply, and food commodity prices also expected to go up modestly, said MAS and MTI.

[WASHINGTON] The United States on Wednesday registered more than 2,400 deaths from Covid-19 in 24 hours, according...

THE Urban Redevelopment Authority (URA) and the Housing & Development Board (HDB) on Thursday released two...

[BENGALURU] Australia's biggest telecom firm Telstra said on Thursday it had agreed to pay a A$50 million (S$49.3...