SINGAPORE is the second-worst performing country in terms of workplace diversity and inclusion (D&I) practices, based on a poll of employees in 14 countries by Kantar, a data, insights and consulting firm.

Meanwhile, Singtel is the only company from the city-state to make the global top 100 in a separate D&I index by Refinitiv.

Almost a quarter (24 per cent) of Singapore workers said they have been "bullied, undermined or harassed" in the workplace in the past year, which is among the highest levels in the world, according to Kantar’s survey findings.

Singapore employees are also the most likely to be made to “feel uncomfortable” (32 per cent) by their employers, compared to other countries polled.

The inaugural Kantar Inclusion Index compares employee feedback on their D&I experiences. It interviewed 18,000 people in 14 countries, including 1,050 individuals in Singapore.

The index covers 24 industries, including health and pharmaceuticals; education; professional services such as legal and accountancy; retail, wholesale and e-commerce; financial services; and the public sector.

The findings also showed that many Singapore workers are struggling to deal with pressure, with 44 per cent reporting that they are affected by “stress and anxiety” at work, above the global average of 39 per cent. 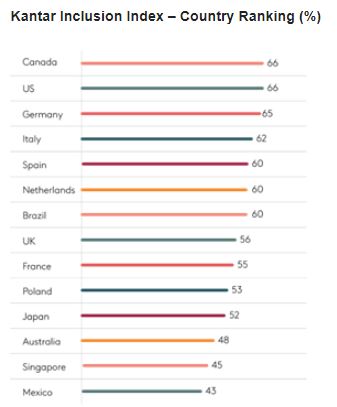 Canada topped the overall inclusion index, partly driven by its gender representation at companies, where more than 40 per cent of senior roles were occupied by women. About two-thirds (65 per cent) of Canadian workers also believed that their employers were actively trying to be more inclusive and diverse. However, one-fifth of Canadians said they experienced bullying in the past year.

Following closely behind Canada in the index was the United States. The US had equal gender representation and 30 per cent representation in terms of ethnicity within companies’ senior leadership. About six in 10 of US workers also believed their employers were actively trying to be more inclusive and diverse, although 17 per cent of them said they were bullied.

Mandy Rico, global director of the Kantar Inclusion Index, said: “A significant amount of work remains to be done to make workplaces more inclusive, diverse and equal, especially around the subject of bullying which persists at high levels around the world.”

Singtel was the only Singapore firm to make Refinitiv’s latest list of top 100 most diverse and inclusive organisations, ranking 79th globally this year.

Aside from the telco, there were 22 other Asia-Pacific companies featured on the list, coming from a diverse range of sectors including food and drug retailing, telecommunications, insurance and chemicals.

Now in its fourth year, Refinitiv’s D&I Index measures the relative performance of over 7,000 companies that represent 70 per cent of global market cap across more than 400 environmental, social and governance (ESG) data points. The firms are scored across four main pillars of diversity, inclusion, people development and controversies. Only companies with scores across all four pillars are assigned an overall score, which is the average of the pillar scores. The top 100 ranked companies with the best overall scores are selected for the index.

Within the Asia-Pacific, Australia continued to lead the region with nine companies ranked among the top 100, followed by Japan with five companies.

Debra Walton, chief revenue officer at Refinitive, said: “Although some Asia-Pacific markets are more mature than others when it comes to ESG, it is gaining more momentum among businesses in the region.”

“The increasing transparency in the reporting of social metrics will offer opportunities for investors to better integrate ESG principles into the investment and strategy decision-making process,” Ms Walton added.

The best performers on Refinitiv’s index were the US with 25 firms followed by the United Kingdom with 10 firms and Australia with nine.

Industries leading this year’s index included 13 pharmaceutical firms; 11 in banking, investment services and insurance; nine in telecommunications; and seven in personal and household products and services.

The D&I Index is available on Refinitiv’s trading software Eikon, as are the underlying diversity and inclusion metrics which financial professionals can use to evaluate companies for long-term opportunities and risks in their investments.

Last week, figures from the Council for Board Diversity showed that women represented 15.7 per cent of board members in the top 100 Singapore-listed companies by market capitalisation, with a marginal increase of just 0.5 percentage point in the first half of 2019. This threw into question whether the council’s target of hitting 20 per cent by end-2020 could be achieved.

[NEW YORK] Eli Lilly & Co is investing US$30 million in a new venture capital (VC) firm that will fund minority-...

[SEATTLE] Amazon.com is offering other companies the ability to use the building blocks of the Alexa digital...

[BRUSSELS] Many European nations say they are receiving lower-than-expected supplies of Covid-19 vaccines as US...

CATALIST-LISTED OUE Lippo Healthcare expects to post a "significant loss" in its half-year and full-year results,...