Andrea Sohsandrea@sph.com.sg@AndreaSohBT
The Singapore government is looking to raise water tariffs as the cost of producing and supplying water rises.
ST PHOTO

THE Singapore government is looking to raise water tariffs as the cost of producing and supplying water rises.

This comes as the level of water in Linggiu reservoir in Johor remains low, and Singapore ramps up other sources of water supply through desalination and NEWater plants. 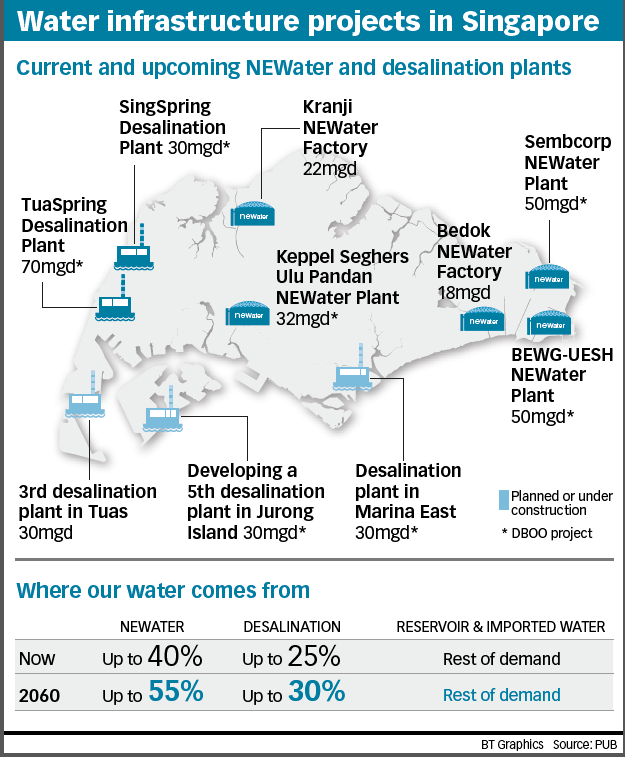 "Going forward we are seeing higher costs in producing the water," said Minister for the Environment and Water Resources Masagos Zulkifli on Tuesday. Water pipes now have to be dug deeper due to increasing urbanisation, and older transmission pipes and plants also have to be upgraded, he explained.

These, together with the need to ensure a sustainable supply of water, means "we have to price water right", he added.

Mr Masagos was speaking to reporters during a visit to the Tuas Desalination Plant that is still under construction. The plant, now 60 per cent completed, is expected to be running by the end of this year.

He said that more details on the increase, such as the quantum and when it will be implemented, will be announced by the ministry during the Budget debate.

The last time Singapore raised water tariffs was 17 years ago.

Singapore brand mark to be introduced; 6,700 opportunities in food sector

Finnish cruise ship evacuated after running aground in Baltic sea

[STOCKHOLM] A Finnish passenger cruise ship was evacuated on Sunday after it ran aground off the island of Aland in...

INSURER AIA Singapore on Monday announced the creation of up to 500 new career opportunities, training and financial...

ByteDance says TikTok will be its subsidiary under deal with Trump

[NEW YORK] China's ByteDance said on Monday that TikTok's global business will become its subsidiary, even as Oracle...

[JAKARTA] Indonesia will shorten a planned shutdown at its Banyu Urip field and accelerate drilling at the Rokan...

Singapore brand mark to be introduced; 6,700 opportunities in food sector

WITH increasing focus on food safety and quality, it is imperative to deepen the trust premium of Singapore food...

UK at 'critical point' in virus surge with London at risk

CCT: Merger with CMT is between two equals, not a takeover