Singapore manufacturing output rebounds with 17.9% jump in January, thanks to electronics

Ann Williamsann@sph.com.sg
Singapore's manufacturing sector staged a strong comeback in January after output suffered its biggest decline in two years the previous month, with output rebounding by 17.9 per cent year-on-year, thanks to a bounce back in electronics production.
PHOTO: ST FILE

SINGAPORE'S manufacturing sector staged a strong comeback in January after output suffered its biggest decline in two years the previous month, with output rebounding by 17.9 per cent year-on-year, thanks to a bounce back in electronics production.

This easily topped expectations of a 7.5 per cent rise in production from analysts polled by Bloomberg.

Factory output had unexpectedly fallen a revised 3.4 per cent in December due to a 34.5 per cent slump in biomedical production and a tepid 4.4 per cent rise in electronics manufacturing.

But in January, electronics output expanded by a robust 32.4 per cent from a year ago, while biomedial manufacturing eked out a 2.5 per cent rise on a much smaller contraction in pharmaceuticals production.

Excluding biomedical manufacturing, output in January grew 21.6 per cent year-on-year, according to preliminary figures released on Monday by the Economic Development Board. 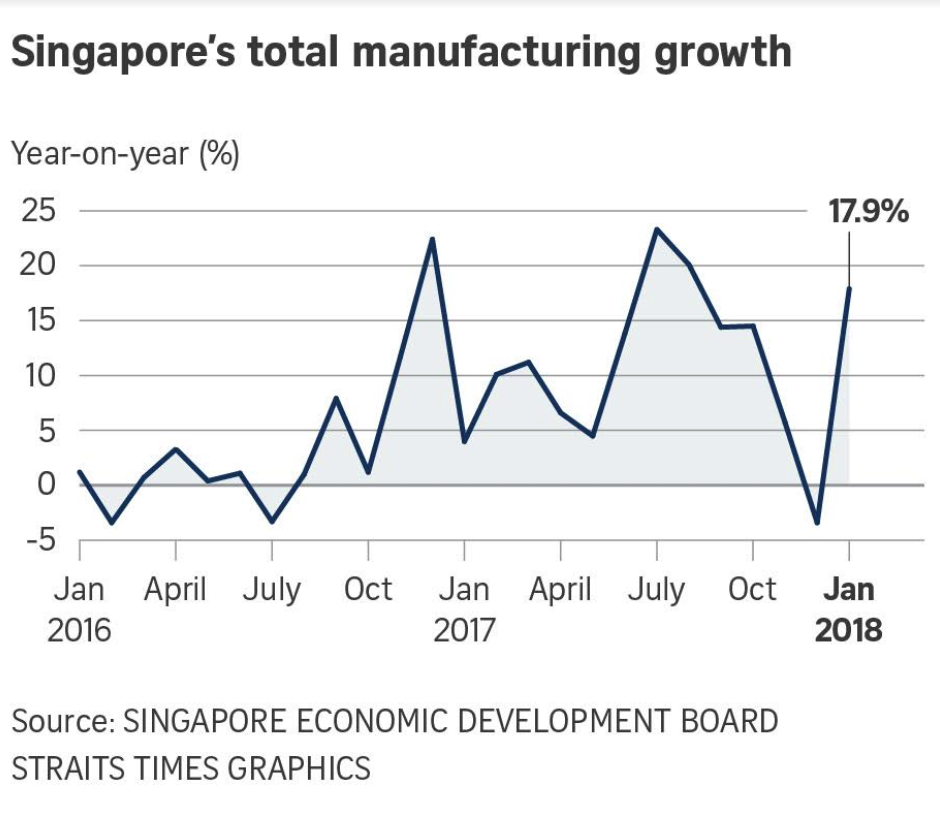 Breaking down electronics production, the semiconductor segment was again the star performer with growth of 41.8 per cent, followed by infocomms & consumer electronics (20.3 per cent) and computer peripherals (9.6 per cent). In contrast, output of the other electronic modules & components declined 6.8 per cent while data storage output fell 29.2 per cent.

Chemicals output increased 13.7 per cent, with all segments seeing growth. The other chemicals expanded 19.5 per cent on higher output in fragrances while the petrochemicals segments grew 14.2 per cent. The specialties and petroleum segments rose 10.7 per cent and 0.8 per cent respectively.

General manufacturing output increased 11.6 per cent. The food, beverages & tobacco segment grew 18.3 per cent, on account of higher production in infant milk products and beverage products. The printing and miscellaneous industries segments expanded 7.5 per cent and 4.7 per cent respectively.

The transport engineering sector saw the weakest year-on-year growth of 1.4 per cent, as the hard-hit marine & offshore engineering segment contracted 19.5 per cent on the continued slump in shipbuilding and repair activities. In contrast, aerospace output rose 23.5 per cent on higher volume of repair and maintenance work from commercial airlines, while land transport expanded 18.1 per cent.

Elite Commercial Reit's Singapore IPO to raise up to £131.2m

[BEIJING] China's top economic planner said it would cut the production and use of plastic over the next five years...

SINGAPORE stocks resumed trading on Monday afternoon in negative territory, with The Straits Times Index down 0.19...