Sharon Seesharons@sph.com.sg@SharonSeeBT
Singapore's non-oil exports contracted at the slowest pace in November after nine straight months of decline, leaving analysts hopeful that the worst may be over.
PHOTO: ST FILE

SINGAPORE'S non-oil exports contracted at the slowest pace in November after nine straight months of decline, leaving analysts hopeful that the worst may be over.

Non-oil domestic exports (NODX) shrank by 5.9 per cent year on year in November, according to data released by Enterprise Singapore (ESG) on Tuesday, outperforming the 6.4 per cent contraction that private sector economists polled by Bloomberg were expecting. In comparison, NODX slid by 12.5 per cent in October.

November's NODX fell mostly because electronic exports shrank faster than the growth of other exports, which entered positive territory for the first time since February.

Electronics exports slid by 23.3 per cent year on year, extending October's 16.4 per cent decline, largely due to a contraction in integrated circuits, personal computers and disk drives, ESG said. However, most economists believe the electronics sector has bottomed out.

"We think the electronics downturn is past its worst and a recovery, albeit sluggish, is underway. A partial US-China trade deal will help revive capital expenditure and exports, and electronics exports will likely emerge out of contraction by early 2020," Maybank Kim Eng economists Chua Hak Bin and Lee Ju Ye said in a report, citing official data that electronics manufacturing clocked a 0.4 per cent growth in October.

In contrast, non-electronic exports expanded 1.3 per cent year on year, rebounding from October's 11.2 per cent decline. ESG said non-monetary gold, specialised machinery and non-electric engines and motors contributed the most to the growth.

With the exception of the United States, Thailand and Indonesia, Singapore's non-oil exports to the majority of the top markets declined in November, ESG said.

The largest contributors to the NODX decline were Hong Kong at -27.6 per cent, the European Union at -10 per cent and China at -6.8 per cent.

On a month-on-month seasonally adjusted basis, NODX grew by 5.8 per cent in November, reversing the 3.1 per cent decline seen in the previous month. ESG said both electronic and non-electronic domestic exports increased. 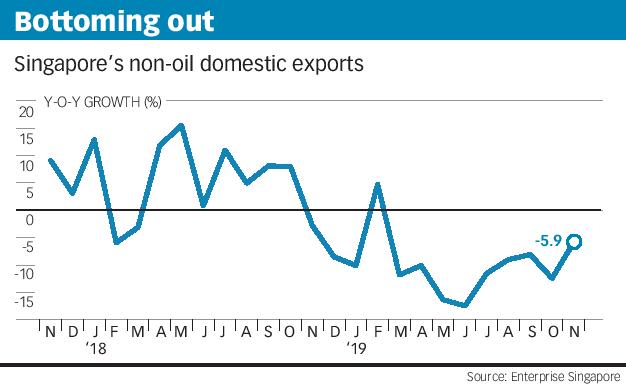 OCBC economist Howie Lee said these are further signs of stabilisation in November that set an "optimistic platform" for 2020.

"On a nominal basis, NODX levels held largely steady from the month before, but the high base from a year ago resulted in a year-on-year change that is less flattering than it looks," Mr Lee said.

On the whole, Singapore's trade outlook will depend on US-China trade relations, economists said.

[SHANGHAI] Listed Chinese companies are queuing up to issue shares and have already announced plans to raise more...

PROPERTY developer UOL Group said on Friday that it is passing "all the savings from the property tax rebate"...

SIAS and its advisers to remain independent, let Hyflux PnP holders 'decide for themselves'

THE Securities Investors Association (Singapore), or SIAS, and its advisers will not be swayed by statements made to...

[LONDON] European stock markets fell at the start of trade on Friday with London's benchmark FTSE 100 index down 0.5...