Singapore Q2 GDP plunges by 13.2% in worst quarter on record

SINGAPORE’S second-quarter economic performance was its worst on record, while the full-year outlook was cut again, policymakers announced on Tuesday morning.

Forecasters from the Ministry of Trade and Industry (MTI) have once more tightened their projection for the pandemic-driven full-year recession. They now expect a year-on-year contraction of between 5 per cent and 7 per cent, compared with 4 per cent to 7 per cent before.

The decline, which worsened sharply from a 0.3 per cent decrease in the first quarter, marked a downgrade from the preliminary figure of 12.6 per cent in advance data. It also fell slightly short of private economists’ prediction of a downward revision to a 12.9 per cent drop.

The MTI warned that "the outlook for the Singapore economy has weakened slightly since May", on uncertainties such as a global economic downturn and pandemic-related developments.

Even with an expected pick-up in the second half of the year, policymakers and watchers alike flagged significant downside risks to the economy.

"Notwithstanding the narrowing of the forecast range, there continues to be significant uncertainty over how the Covid-19 situation will evolve in the coming quarters, and correspondingly, the trajectory of the economic recovery in both the global and domestic economies," the MTI added in its statement.

Construction and marine and offshore engineering could see a "deeper and more protracted" downturn than earlier expected, the MTI noted - no thanks to slower-than-expected resumption of activity in industries that rely on foreign workers living in virus-stricken dormitories.

It said: "A sharper slowdown in these sectors is also expected to have negative spillover effects on firms in supporting industries, such as professional services firms providing architectural and engineering services for construction projects."

Manufacturing - which had been the only sector to register year-on-year growth in the advance estimates - fell into negative territory on updated data as it shrank by 0.7 per cent. The contraction reversed factories' 7.9 per cent growth in the quarter before.

As earlier disclosed by the MTI, the chemicals, transport engineering and general manufacturing clusters were weighed down by weak external demand and the disruption of the "circuit breaker".

Still, the biomedical manufacturing, electronics and precision engineering clusters notched expansions, helped by a better-than-expected rebound in demand for semiconductors.

Meanwhile, the fall in the services sector was revised up a tad to 13.4 per cent, from an earlier estimate of 13.6 per cent, with finance and insurance the only segment in the black.

Declines ranged from a contraction of 41.4 per cent in tourism-reliant accommodation and food services, to a mild 0.5 per cent dip in information and communications, as telecommunications shrank on lower roaming and prepaid services.

Construction, which has been badly affected by the wildfire spread of the virus among migrant labourers, plunged 59.3 per cent in the quarter, against an earlier estimate of 54.7 per cent.

On a seasonally adjusted, quarterly basis, the economy lost 13.1 per cent, against a decline of 0.8 per cent in the first quarter.

While the worst was likely over in the second quarter, analysts still believe that the Singapore economy will remain contractionary through the end of the year.

“Recovery in the second half will be sluggish and choppy, dampened by the slow reopening, border controls, strict social distancing rules and foreign worker shortages,” Maybank Kim Eng economists Chua Hak Bin and Lee Ju Ye wrote in a report.

Even though coronavirus-related restrictions were relaxed from mid-June, Brian Tan of Barclays Bank cited data that suggests “economic activity remains well below pre-coronavirus levels despite the easing of social distancing measures”.

Citi economists Kit Wei Zheng and Ang Kai Wei even offered an even dourer, below-consensus forecast for a full-year contraction of 7.5 per cent.

This gloomy picture assumes a subdued quarter-on-quarter rebound “amidst tapering of fiscal support to jobs and domestic demand”, they said.

Selena Ling, chief economist at OCBC Bank, attributed the negativity to “the escalating US-China tensions… coupled with the long tail nature of the Covid-19 pandemic”. 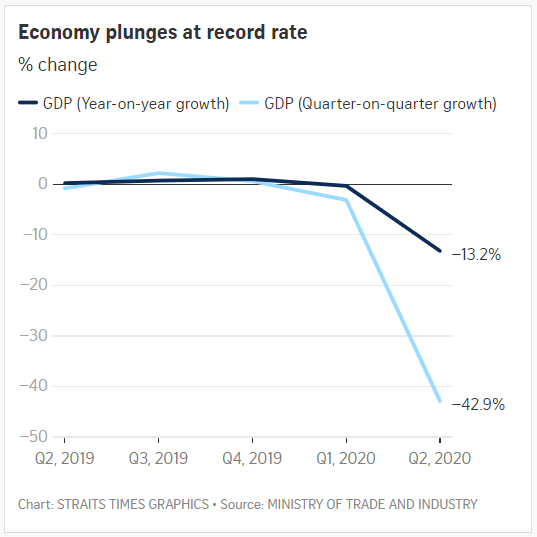