SINGAPORE’S growth in the third quarter fell short of economist predictions, dragged down by moderating demand for electronics amid uncertain global conditions arising from the US-China trade war.

In the latest data, the Singapore economy grew by 2.2 per cent in the third quarter, a notch below economist expectations of 2.4 per cent and under the 2.6 per cent seen in the advance estimates.

This was also slower than the growth of 4.1 per cent in the previous quarter.

This was still in line with official expectations, as the Ministry of Trade and Industry (MTI) narrowed its full-year growth forecast upwards to 3-3.5 per cent on Thursday, thanks to a stronger than expected performance in the first half.

Earlier estimates had pegged growth to come in within the upper half of the 2.5-3.5 per cent range this year.

Five key milestones in Singapore's sustainability journey as it turns 55

But with global growth likely to ease in 2019, the MTI expects Singapore’s economic growth next year to ease, coming in at 1.5-3.5 per cent.

On a quarter-on-quarter seasonally-adjusted basis, Singapore's economy grew by 3 per cent, faster than the 1 per cent in the preceding quarter.

DBS senior economist Irvin Seah said: "Besides the high base effect which weighed down on the year-on-year figures, the better sequential growth number nonetheless underscores some degree of resilience in the economy.

"That said, there are concerns regarding the risk aversion and faster than expected hikes in interest rates causing excessive volatilities in the financial markets, and property cooling measures weighing down on the business service - that is, real estate - and construction sectors in the coming quarters." 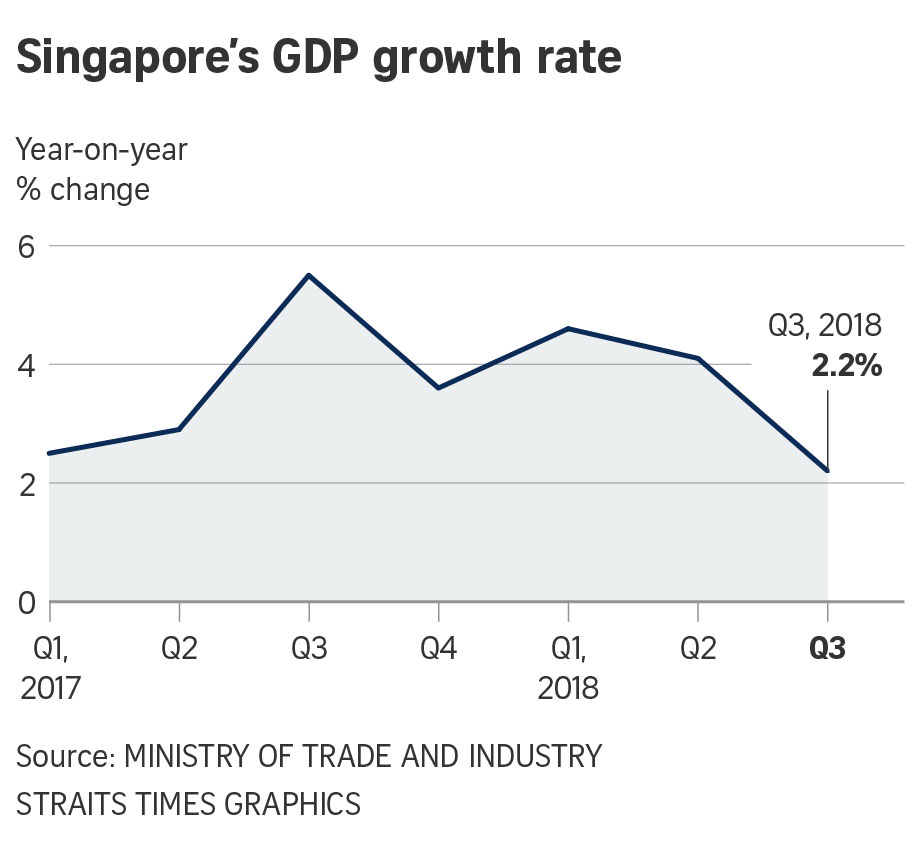 Growth in the quarter was mainly supported by finance and insurance, manufacturing and the business services sectors.

Services expanded by 2.4 per cent, easing from the 2.8 per cent growth in the previous quarter.

Construction continued to contract, declining by 2.3 per cent, but this was a slower pace of decline compared to the previous quarter’s contraction of 4.2 per cent.

For the rest of 2018, Singapore’s economic growth is expected to “moderate but remain firm”.

Looking ahead, the MTI cautioned that the external demand outlook next year is slightly weaker than 2018, while risks in the global economy are tilted to the downside.

Key risks include further escalation of the ongoing trade conflict, as well as a faster than expected tightening of global financial conditions.

"In particular, the manufacturing sector is likely to see a more modest pace of expansion," the MTI said.

Citi analysts Kit Wei Zheng and Ang Kai Wei wrote in a flash report: "Headwinds to exports and a patchy domestic demand recovery notwithstanding, we note potential cushions from the diversion of trade and production from China to Asean to circumvent US tariffs."

They cited how the GDP (gross domestic product) share from exports to Malaysia, Indonesia, Thailand, the Philippines and Vietnam rose to 5.3 per cent in 2017, from 4.7 per cent in 2011, while just 1.2 per cent of Singapore's GDP was exposed to Chinese exports to the US.

But DBS's Mr Seah warned: "On the export front, electronics cycle has peaked, and demand could be waning. Trade war could also add salt to wound in the near term.

"We expect some drag on export performance arising from trade in the near term despite potential upsides in the medium term from trade diversion."

Alvin Liew, senior economist at United Overseas Bank, noted that the growth could still point to the Monetary Authority of Singapore tightening its stance at its next monetary policy meeting in April 2019, with core inflation likely to inch up to 1.5-2.5 per cent in 2019.

"The biggest uncertainty for this view is the trade tensions between US and China, as well as its allies," he added.

Business closures, layoffs to rise, but Singapore will get through crisis: PM Lee

Business closures, layoffs to rise, but Singapore will get through crisis: PM Lee

Business closures, retrenchments and unemployment are all likely to rise in the coming months, said Prime...
03:18 PM
Companies & Markets