Singapore Q3 GDP up by 0.1% in MTI flash data in close shave for recession fears

Annabeth Leowleowhma@sph.com.sg@AnnabethLeowBT
The Singapore economy may have narrowly avoided a technical recession in the third quarter, according to flash estimates from the Ministry of Trade and Industry (MTI) on Monday.
PHOTO: ST FILE

THE Singapore economy may have narrowly avoided a technical recession in the third quarter, according to flash estimates from the Ministry of Trade and Industry (MTI) on Monday.

But the city-state’s gross domestic product (GDP) looks to have grown by just 0.1 per cent year on year in the July-to-September period, flat on the meagre expansion of 0.1 per cent posted in the second quarter.

The showing is still worse than expected - private-sector watchers had guided for growth of 0.2 per cent in a Bloomberg poll and 0.3 per cent in a Reuters poll - and Singapore faces tepid full-year growth of between zero and 1 per cent, according to earlier official forecasts.

Still, on a seasonally adjusted, quarterly basis, the GDP was up by 0.6 per cent, averting the technical recession that happens on two straight quarters of quarter-on-quarter decline.

The economy had declined by 2.7 per cent the previous quarter, as the figure was revised higher than an earlier print of 3.3 per cent contraction.

Manufacturing may have lost 3.5 per cent year on year, deepening from a revised 3.3 per cent drop in the second quarter. But, on a quarterly basis, the fall has moderated sharply to 0.4 per cent, from 4.2 per cent before.

The services industries scraped in with 0.9 per cent growth, against its expansion of 1.1 per cent previously, which represents quarter-on-quarter uptick of 0.7 per cent, with support from finance and insurance, business services, and other services industries.

Meanwhile, the resurgent construction sector appears to have grown by 2.7 per cent, compared with a revised 2.8 per cent before, as the pace of quarterly decline eased, from 5.3 per cent to 1.1 per cent.

The MTI attributed the sector’s improvement to “a pickup in both public and private sector construction activities”, while Maybank Kim Eng economist Lee Ju Ye suggested that construction will outperform manufacturing and services for the rest of the year on a strong pipeline of public infrastructure projects and collective sale site redevelopment.

“For all of you in the built environment industry, I am sure this will come as good news, because in the current economic climate, our assurance is that we will continue to have a good pipeline of public sector projects, which hopefully will provide support for our important industry partners, be it consultants or contractors,” Mr Wong, who is also Second Minister for Finance, said at an industry event on Oct 11.

Vishnu Varathan, head of economics and strategy at Mizuho Bank, warned against “pointless obsession with, and hollow consolation from, averting a technical recession”.

On the back of US-China tensions, “the economy is left on a knife's edge, dependent on diplomatic and political outcomes outside of Singapore's locus of control”, he lamented.

“Worse, uncertainty from US-China conflict undermines confidence and hobbles businesses to the detriment of growth.”

Over the weekend, the US and China reached an in-principle agreement for a partial trade deal, after 13 rounds of negotiations.

“However, without any complete unwinding of existing US-China tariffs, the cloud over the global trade environment may not fully dissipate,” OCBC Bank chief economist Selena Ling cautioned on Monday.

She suggested that US President Donald Trump could return to threats of tariff hikes if future negotiations leave him dissatisfied: “Accordingly, the electronics and supporting industries should still see persistent weakness over the near term.” 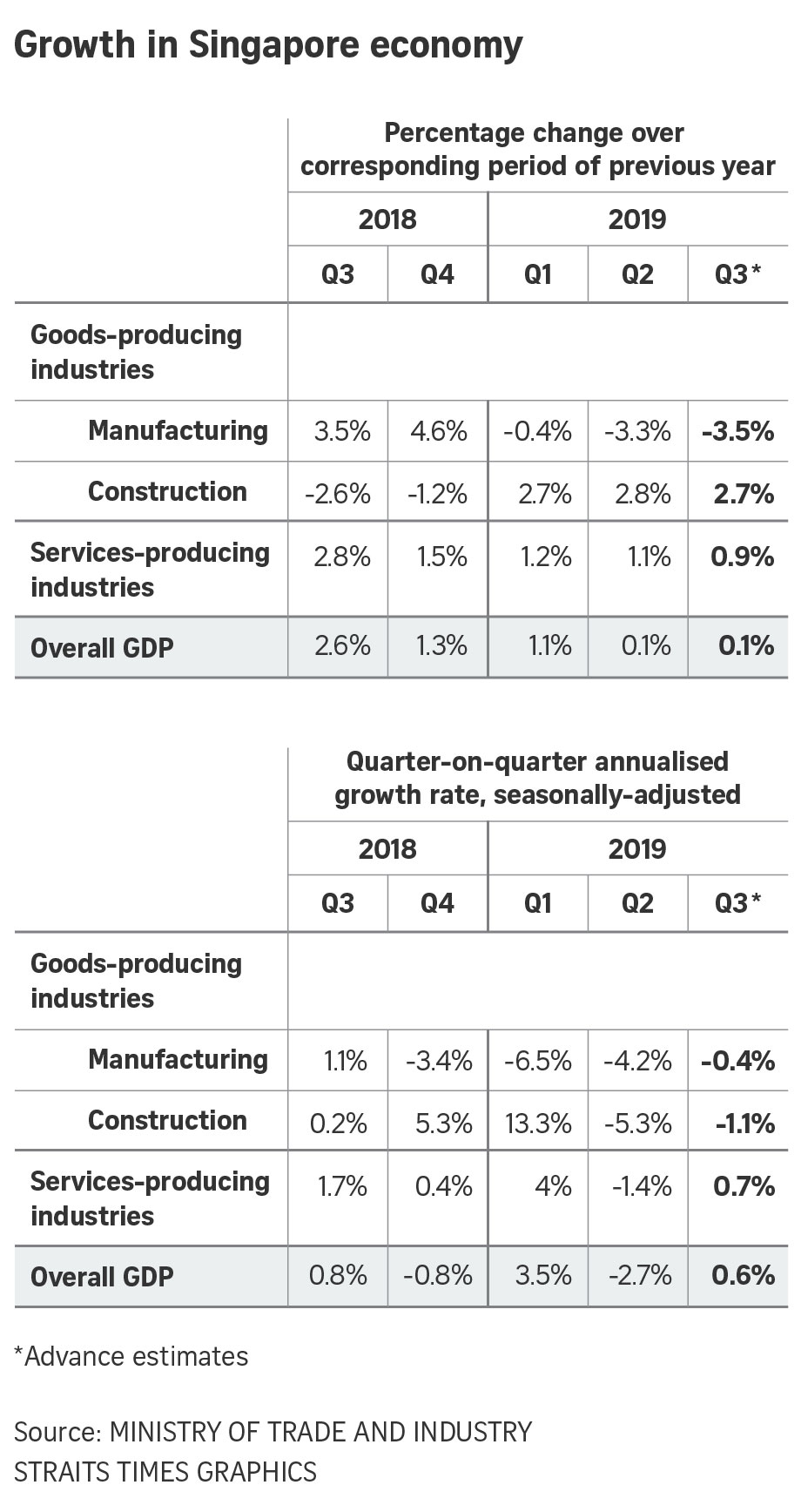 Citing expectations of muted improvement next year, the central bank pulled back on the Singapore dollar’s rate of appreciation in a policy decision on Monday.

The Monetary Authority of Singapore (MAS) said that “the weakness in electronics production and its supporting industries in Singapore is likely to persist over the near term”, while the outlook for the retail industry has dimmed even as other domestic-facing sectors - education, health and social services - are expected to show “resilient” growth.

“Growth in the Singapore economy has slowed over the first three quarters of the year,” the MAS added. “It is expected to pick up modestly in 2020, although this projection is subject to considerable uncertainty in the external environment.”

The advance GDP estimates are largely based on data from July and August, and may be revised in the final print, which is due by the end of November.

Ms Ling noted that the Singapore economy could post modest improvement in 2020, but warned that this would come on a low base and assumes “no further escalation in US-China trade tensions and geopolitical hot spots”.

24,000 placed under SGUnited package so far; MOM to give weekly updates on job situation

Singapore Q2 GDP plunges by 13.2% in worst quarter on record

SINGAPORE cannot afford to wait out the coronavirus crisis, as permanent changes mean that there will be no going...

Singapore shares edge up at open despite Q2 GDP plunge; STI up 0.3%

[SINGAPORE] AXA is considering a sale of its Singapore business as it seeks to raise funds divesting peripheral...

24,000 placed under SGUnited package so far; MOM to give weekly updates on job situation

AS at the end of July, 24,000 people have been placed under the SGUnited Jobs and Skills package, said the Ministry...