Anita Gabrielanitag@sph.com.sg@AnitaGabrielBT
Singapore has emerged 13th in a field of 200 countries, ranked according to the risk of encountering commercial bribery.
PHOTO: REUTERS

SINGAPORE has emerged 13th in a field of 200 countries, ranked according to the risk of encountering commercial bribery.

The 2017 TRACE Bribery Risk Matrix, a global business bribery risk-assessment tool, thus categorises the city state as "very low" in terms of risk of business bribery or, in other words, corruption-related concerns.

The risk-assessment tool created by TRACE International, an anti-bribery standard-setting organisation, guides companies in gauging the risk of commercial bribery worldwide, as well as within each country.

Sweden, New Zealand and Norway were among the five least-risky countries, along with newcomers Finland and the United Kingdom. The five riskiest for bribery were Somalia (ranked last among the 200 countries), Venezuela, Turkmenistan, North Korea and South Sudan.

Hong Kong took the 15th spot, and the US was ranked 16th.

In terms of "business interactions with government", Singapore received a "very low" score of one, based on a very low degree of government interaction, very low expectation of bribes, and very low regulatory burden. 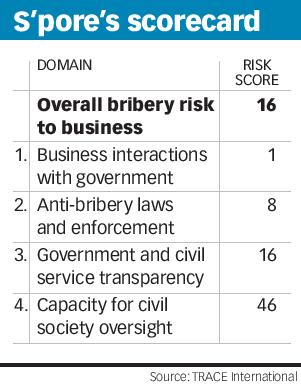 The highest score among the four domains came from a "medium" score of 46 for "capacity for civil-society oversight", based on the degree of media freedom/quality and a high degree of social development, said TRACE Matrix.

She pointed out that Singapore has garnered its share of headlines recently, from the Glenn Marine scandal and the role that representatives of the US Navy played in that.

"Overall, however, Singapore remains near the front of the global pack, and certainly at the head of the pack in Asia."

Essentially, the TRACE Matrix is designed to reflect each country's current risk profile - that is, the likelihood that a company will experience bribery demands - as accurately as possible.

Ms Wrage said top-level risk scores are markedly lower this year, primarily because of changes in the methodology and data inputs rather than a drop in corruption levels.

In some cases, however, reform efforts and changes in country conditions have resulted in improved scores. In India for example, a big recent drop in expectation-related indicators and significant improvements in cutting red tape for establishing utility services has had a significant impact on lowering (that is, improving) the country's overall risk score.

As a continent, Asia's average risk score is 52, placing it ahead of South America and Africa, but behind North America, Oceania and Europe.

One of the interesting themes for Asia over the next few years will come from China's Belt and Road Initiative, which represents a massive investment in some of the world's most challenging jurisdictions, she added.

[TAIPEI] Taiwan's relationship with its most important global backer the United States has gotten off to a strong...

Australian economy forecast to rebound in 2021 as pandemic subsides: poll

[BENGALURU] Australia's economy, which entered 2021 in better shape than most of its peers, will gain further...

Biden to roll back Trump policies, remake US role in climate crisis