It's an improvement from 2015 after World Bank update in data and use of new methodology
Chuang Peck Mingpeckming@sph.com.sg@PeckmingBT
Singapore is ranked second, behind New Zealand, among 190 economies in the ease of doing business, according to the latest World Bank's annual ratings.
PHOTO: REUTERS

SINGAPORE is ranked second, behind New Zealand, among 190 economies in the ease of doing business, according to the latest World Bank's annual ratings. 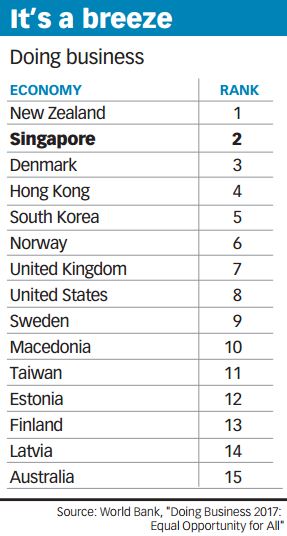 While this means the Republic, which has topped the rankings for over a decade, has slipped in its ranking from 2015, details in the 356-page report and accompanying 104-page country study suggest otherwise.

The latest reports, entitled "Doing Business 2017: Equal Opportunity for All", say that after "capturing the effects of such factors as data revisions and the changes in methodology", the "comparable ranking" for Singapore in 2015 is third - and not first, as published last year. With the revised third spot ranking for 2015, the latest second placing would be an improvement.

So it's still not only a breeze to do business in Singapore, but the environment here has improved further with its overall score for ease of doing business rising 0.55 to 85.05 points. New Zealand scored 87.01 points.

In the 10 areas in which the overall ease of doing business is measured, Singapore improved its rankings in four - "starting a business" (up 1 rank), "dealing with construction permits" (up 14 ranks), "registering property" (up 3 ranks) and "paying taxes" (up 1 rank).

It remains the same in "getting electricity", "protecting minority investors", "trading across borders" and "enforcing contracts", but fell one rung in both "getting credit" and "resolving insolvency".

This year, the World Bank has added a gender component to three indicators - starting a business, registering property and enforcing contracts. This provides an index of the freedom women have in business.

Starting a business takes an average 21 days worldwide, up from 46 days 10 years ago, according to the latest Doing Business report.

In Singapore it takes only 2.5 days, but that's still slower than five other economies, including New Zealand (rank 1) and Hong Kong (rank 3).

Singapore is ranked top, together with New Zealand, in protecting minority investors. It's ranked second, behind South Korea, in enforcing contracts.

The report noted that Singapore has made enforcement easier by introducing a new electronic litigation system that streamlines litigation proceedings.

The country made the biggest improvement in dealing with construction permits, jumping from 24th to 10th in ranking - thanks much to streamlining of procedures and better online one-stop shop. New Zealand is again ranked first in this indicator.

But when it comes to getting credit, Singapore slipped one position to 20th in the latest rankings, together with Malaysia and Hong Kong.

It also did poorer in resolving solvency, falling one position to 29th. New Zealand is ranked even lower at 34th.

Singapore's worst relative showing is in "trading across borders", where it's ranked 41. While this is surprising for a trading nation and a free port, it should be noted that Hong Kong, another free port, is ranked 42.

Overall, the World Bank's latest report says there are fewer obstacles to doing business in the world today than before - thanks to lower levels of income inequality which has reduced poverty and boosted shared prosperity.

"Doing Business data point to continued successes in the ease of doing business worldwide, as governments increasingly take up key business reforms," the World Bank says in a press release.

A record 137 economies have adopted key reforms that make it easier to start and operate businesses.

Developing economies carried out more than 75 per cent of the 283 reforms in the past year, with Sub-Saharan Africa accounting for over a quarter of the reforms.

[ATHENS] Turkish hackers claimed Friday to have hijacked for more than 90 minutes the official websites of the Greek...

[UNITED STATES] Dozens of trucks have started dumping hundreds of thousands of tons of sand on Miami Beach as part...

Trump, EU chief to meet in Davos as US tariffs loom over digital tax: sources

Trump warns Iran's supreme leader to be 'careful with his words'

[GEORGETOWN] The first-ever cargo of Guyana's crude for export is scheduled to begin loading this weekend so the oil...