Chuang Peck Mingpeckming@sph.com.sg@PeckmingBT
The Economic Development Board reported just over a week ago that foreign investment commitments in Singapore slipped in 2016 to their lowest level in recent years.
ST PHOTO

THE Economic Development Board reported just over a week ago that foreign investment commitments in Singapore slipped in 2016 to their lowest level in recent years.

Estimates on global direct investments released over the weekend by the United Nations Conference on Trade and Development (UNCTAD) show that it wasn't all that bad for Singapore.

While FDI inflow in Singapore tumbled from US$65 billion in 2015 to US$50 billion last year, according to UNCTAD's latest quarterly Global Investment Trends Monitor report, the drop was part of a global decline.

Thanks to weak economic growth and trade volumes, global FDI flows fell 13 per cent to about US$1.52 trillion at the same time. 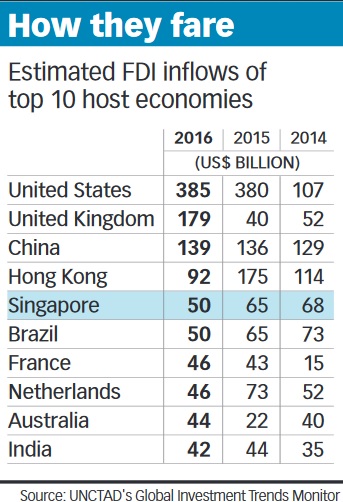 Sure, Singapore saw a sharper drop - down 23 per cent - than the global average, but it remained among the top 10 FDI destinations. In fact, Singapore climbed back to fifth position in the global FDI rankings, after sliding to seventh in 2015.

And with the report tipping global FDI flows to recover and jump by around 10 per cent this year, Singapore should also see higher FDI inflows in 2017. This is more upbeat than EDB's forecast - the investment promotion agency expects to attract a "comparable" amount of fixed asset investments as in 2016.

According to the UNCTAD report, FDI flows to developing Asia and Oceania, which Singapore is grouped under, fell 22 per cent last year. They also slipped in Europe (29 per cent), Latin America and the Caribbean (19 per cent) and Africa (5 per cent).

In contrast, FDI inflows recovered among transition economies (up 38 per cent) such as Kazakhstan and the Russian Federation. They more than doubled in other developed economies , due largely to a strong rebound in investment in Australia (more than doubled to US$44 billion) and Japan (reversing from a US$2 billion drop to a US$16 billion increase).

There was also continued growth - if less dynamic than in the previous year - in FDI flows to North America (6 per cent).

The report says that such regional differences raised the share of developed economies in world FDI flows to 57 per cent of the total. Still, developing economies continued to account for half of the top 10 host economies.

The US remained the biggest recipient of FDI flows (US$385 billion), followed by the UK (US$179 billion) which shot up from 12th position in 2015. China kept its third placing.

The report says that the decline in inflows in developing Asia was relatively widespread, with every major sub-region posting double-digit falls. But in absolute terms, over half of the decline in the region was centred in Hong Kong - down from US$175 billion to an estimated US$92 billion, returning the FDI inflows to the levels before the spike in 2015.

In contrast, FDI flows into China stayed strong, rising 2.3 per cent to a new record. South Korea also saw FDI flows bounce back to US$9.4 billion, up from US$4 billion in 2015. FDI inflows in Pakistan jumped by a spectacular 82 per cent to US$1.6 billion, due to Chinese investment in infrastructure in the country.

The report says that global economic growth should pick up this year to speed up world trade expansion and spark a rebound in FDI flows. Still, it warns of "significant uncertainties that could have a material impact on the scale and contours of any FEI recovery in 2017".

A key concern remains: how to "reactivate" productive investment to generate jobs and raise productivity, according to the report.

"Despite the acceleration in economic activity, the ILO (International Labour Organization) estimates that global employment growth will continue to decelerate in 2017, falling to 1.1 per cent," it says. "To take full advantage of the improving global economic economic environment, countries must make boosting domestic and foreign investments key policy priorities."

[NEW YORK] A CNN reporting team was arrested live on television early Friday while covering the protests in...

[WASHINGTON/HONG KONG] President Donald Trump on Friday ordered his administration to begin the process of...

Trump says US 'terminating' relationship with WHO

[WASHINGTON] President Donald Trump said Friday he was severing US ties with the World Health Organization (WHO),...

US: Wall St ends mostly up; Trump comments on China but takes no action on trade

[BENGALURU] European shares fell on Friday, with investor nerves ahead of US President Donald Trump's response to...