Singapore tops Asia in adult full-time work, but can do better in employee engagement

Jacquelyn Cheokbtnews@sph.com.sg
Singapore has emerged as the top Asian country in adult full-time employment, excluding those self-employed, with 48 per cent of adults having this type of work.
PHOTO: ST FILE

SINGAPORE has emerged as the top Asian country in adult full-time employment, excluding those self-employed, with 48 per cent of adults having this type of work.

Hong Kong is second at 43 per cent and Taiwan is third at 42 per cent.

This is according to Gallup's 2018 Global Great Jobs Briefing, the findings of which were released on Wednesday. The report shows the distribution of high-quality jobs around the globe and how those jobs improve work and life outcomes for businesses and employees alike.

Singapore is found to also lead the region in "full-time employment that engages workers", with 11 per cent of adults fitting this description. This is followed by Mongolia (10 per cent) and the Philippines (9 per cent).

Gallup defines people who are engaged at work as "highly involved in and enthusiastic about their work", who drive performance and innovation and move their organisation forward. Gallup added that research shows that across industries and countries, teams with highly engaged members are, on average, 17 per cent more productive than those with lower average engagement.

Globally, Singapore is third in terms of percentage of total adult population that are employed full time and engaged at work. The US and Russia tie for first place with 13 per cent, while the United Arab Emirates is in second place with 12 per cent. Singapore, Kazakhstan and Panama share third place with 11 per cent. 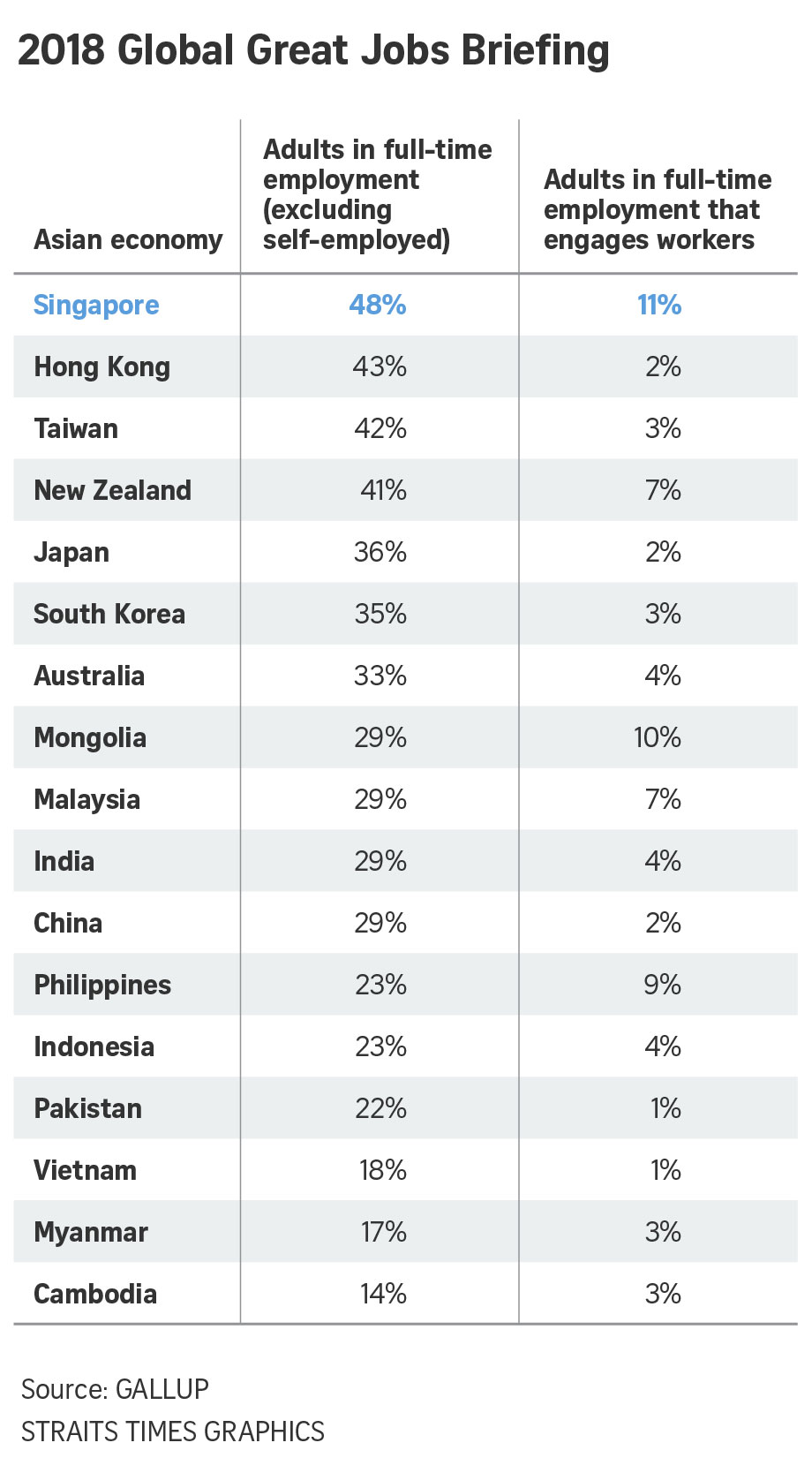 Gallup said: "Despite Singapore's strong overall job performance relative to other countries, it still suffers from a large engagement deficit.

Gallup added: "This engagement deficit has negative impacts on employers and employees in Singapore, lowering productivity and retention as well as depressing workers' well-being. Business leaders in Singapore should be particularly concerned about engagement if they want to fully develop their human capital."

Orders for US core capital goods beat expectations in September

Seven new Covid-19 cases in Singapore, including one in the community

[NEW YORK] Green power is set to draw around US$11 trillion of investment in the coming decades as the cost of...

Japan's ANA to shrink fleet as it skids toward record US$4.8b loss

[TOKYO] Japan's ANA Holdings on Tuesday said it will retire more than a tenth of its mostly Boeing fleet and delay...

[INDIANAPOLIS] Eli Lilly and Co fell short of analysts' expectations for third-quarter profit on Tuesday due to...

Orders for US core capital goods beat expectations in September

[WASHINGTON] New orders for key US-made capital goods rose more than expected in September, wrapping up a quarter of...