Next year marks an ominous turning point for Singapore's graying population, according to research by Francis Tan, an economist at United Overseas Bank.
PHOTO: ST FILE

[SINGAPORE] Next year marks an ominous turning point for Singapore's graying population, according to research by Francis Tan, an economist at United Overseas Bank.

In 2018, the share of the population that's 65 years and older will match those younger than 15 for the first time, Tan wrote in a report on Wednesday. As the elderly population starts to crowd out the youth, the "demographic time bomb" may mean changes to taxes, immigration rules, and social services, he said.

"Singapore is facing one of the toughest economic and social challenges since its independence in the form of a rapidly aging workforce and population," Tan said.

At this rate, seniors in Singapore's population will make up more than double the share of the youngest residents in 2030. Tan uses a compounded annual growth rate rather than adjusting for potential policy changes or alteration of trends such as fertility rates, meaning officials could still help redraw those lines, or at least make them appear less menacing, over the next decade.

With already the oldest population in the Association of Southeast Asian Nations, the Singapore of 2030 will probably look a lot like the demographics-embattled Japan of 2016, Tan's figures show. 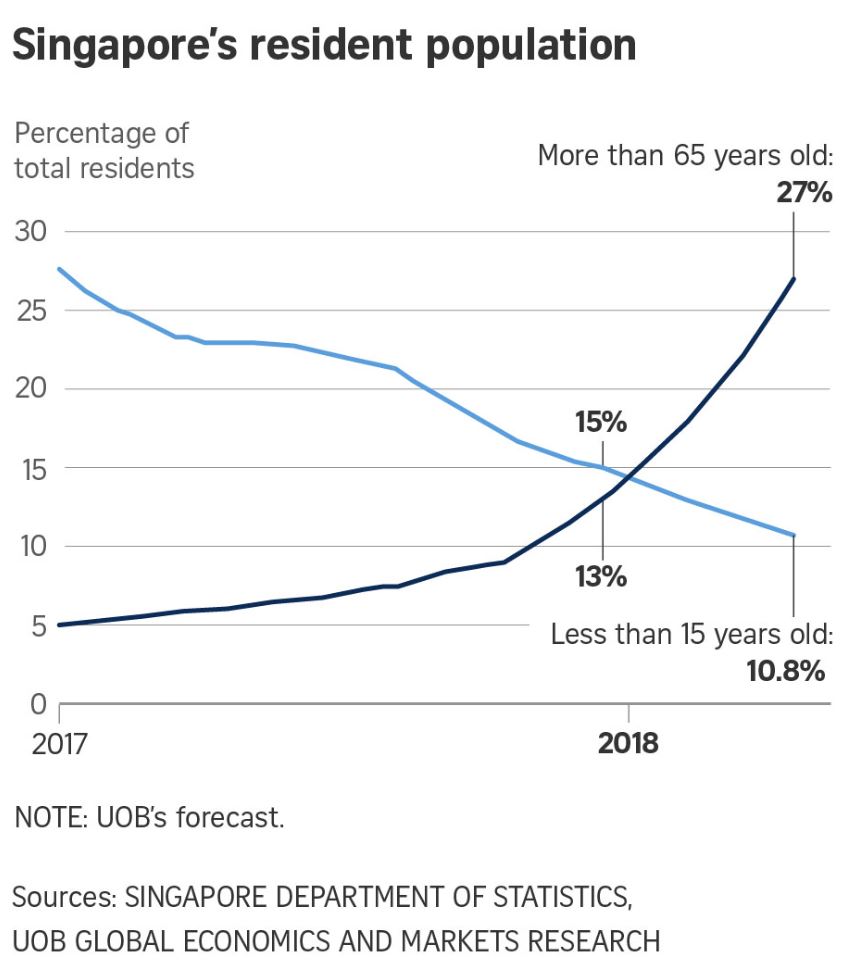 That's all making policy more complicated as the city state seeks to ensure that the elderly population is cared for without curbing the well-being of younger residents.

One way to increase the labor supply would be to ease immigration restrictions, a move that would have to be done at a managed pace to avoid worsening the "foreigner assimilation issue" in Singapore, even though the country can't afford zero immigration, Tan said. Singapore tightened rules on the hiring of foreigners in the wake of the 2011 election, amid voter discontent over gridlock and competition for employment, property and education.

Tan uses the analogy of a restaurant's kitchen for the economy to show how aging threatens growth, and the quality of that output.

"If there are fewer new chefs coming into the kitchen to cook the massive pot of broth (because of low birth rates and low levels of immigration), the existing pool of experienced chefs are aging and retiring, and there is no improvement in labor productivity, the amount of broth (GDP) that will be produced in the next period will certainly be lesser, or worse still, be of inferior quality," he wrote.

The stark trend also helps explain why Prime Minister Lee Hsien Loong has said tax increases are not a matter of if, but when. His remarks were echoed by other government officials, suggesting that a boost to the goods and services tax, among other proposals, is being considered for implementation as early as next year.

Tan sees the government increasing the GST next year to 8 per cent from 7 per cent, with an equal boost in 2019.

While Tan's warnings carry a dark tone, he's optimistic that the government has time to enact changes that will mitigate the negative effects of aging.

"The demographic time bomb only starts ticking in 2018 - it does not mean that it will explode yet," he wrote. "There is still a sizable percentage of working-age population supporting the economy. That said, one will have to understand that this cannot last forever."

Japan commits 17.2b yen to WHO's global coronavirus vaccine programme

LNG-fuelled tankers to more than double by 2030: Petronas exec

[SINGAPORE] The number of ships fuelled by liquefied natural gas (LNG) is expected to more than double by 2030,...

[BEIJING] China has successfully sent nine satellites into orbit in its first commercial launch of a rocket from a...

Singapore shares edge up at Wednesday's open; STI up 0.3%