Singaporeans' inflation expectations fall to 3.11% for year ahead despite trade war fears

Annabeth Leowleowhma@sph.com.sg@AnnabethLeowBT
Both medium and long-term inflation expectations have eased from three months ago, according to the latest quarterly survey from a Singapore Management University think tank in results released on Monday.
PHOTO: ST FILE

BOTH medium and long-term inflation expectations have eased from three months ago despite the potential of a trade war between the US and other major economies, particularly China, according to the latest quarterly survey from a Singapore Management University think tank released on Monday.

Singaporeans' median headline inflation projections for one year from now stood at 3.11 per cent in June 2018, down from 3.43 per cent in March 2018.

Meanwhile, five-year expectations fell to 3.77 per cent, from 4.15 per cent before.

The report from the Sim Kee Boon Institute for Financial Economics said that  the Singapore central bank's recent monetary tightening may have put the crimp on inflation expectations, while "improving labour market conditions might have some uplifting effects on inflation as higher wages pass through to domestic prices".

A decline in vehicle Certificate of Entitlement premiums might have pushed down headline inflation expectations without affecting core inflation, since that yardstick excludes housing and private road transport costs, it added.

But the think tank also cautioned that a faster-than-foreseen normalisation of United States monetary policy could lift volatility in global financial markets while putting pressure on import-oriented economies amid rising oil prices.

The potential trade war between the US and China could be another threat to inflation predictions. 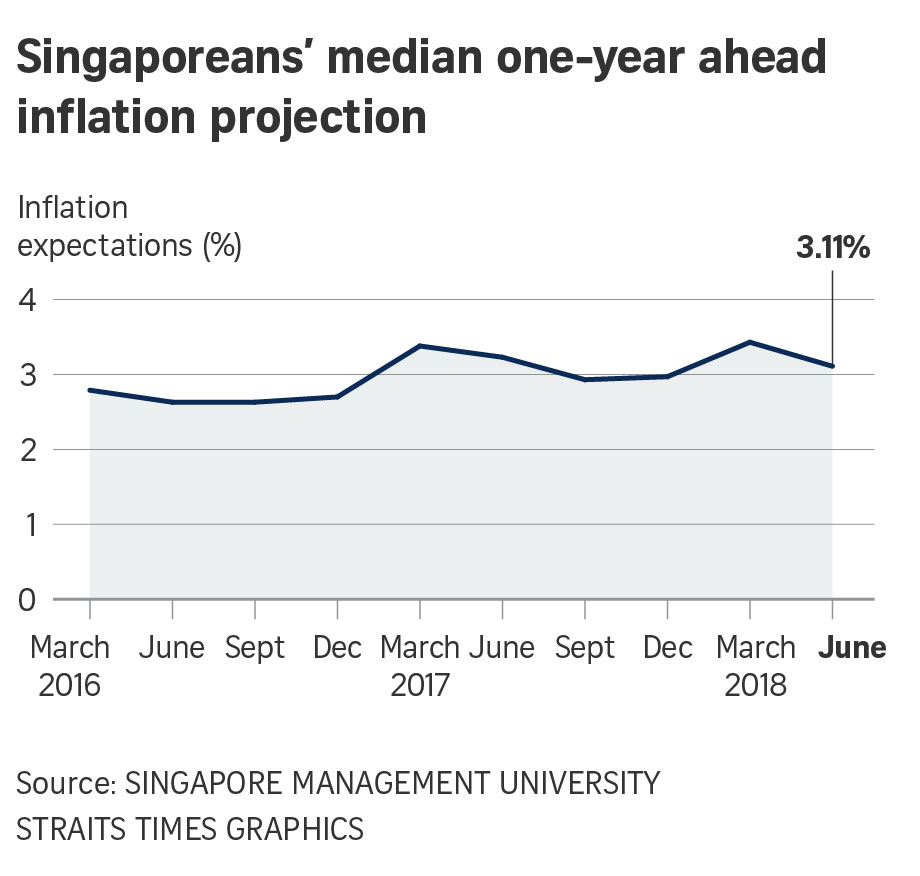 Assistant professor of finance Aurobindo Ghosh, who heads the Singapore Index of Inflation Expectations (SInDEx) project, said: "The risk to global free trade with unilateral or retaliatory tariffs imposed pose a clear and present danger to price stability in the globalised economy.

"In academic literature, evidence shows unanticipated changes in inflation can adversely impact global financial markets and consequently the prospects of growth. Hence, deliberate normalisation of monetary policy might not be effective in cases where there are factors such as protectionist policies that can adversely affect prices and prospects of jobs and economies.

"So far, inflation expectations of Singaporeans have been quite grounded after adjusting for behavioural bias; however, we cannot preclude the possibility of a surge in inflation if a full-fledged trade war among the major economies of the world is not averted through negotiations."

Separately, the Monetary Authority of Singapore's June survey of professional forecasters showed that headline inflation for the whole year is expected to clock 0.8 per cent - down from a prediction of 1 per cent in March - and has been forecast to come in at 1.5 per cent in 2019.

UK will not accept a Brexit trade deal at any cost

ACCRELIST is scrapping its proposed acquisition of Liaoning Mealplus Technology, a developer of software and...

UK will not accept a Brexit trade deal at any cost

[LONDON] Britain and the European Union can clinch a Brexit trade deal and the shape of one is clear but London will...

COFFEE shop operator Kimly has posted a 25.8 per cent rise in net profit to S$25.2 million for the year ended Sept...