Annabeth Leowleowhma@sph.com.sg@AnnabethLeowBT
Singaporeans don't expect overall consumer costs to budge much in the next 12 months, but think that core inflation - that is, price hikes outside of housing and private transport - could still inch up.
ST PHOTO: KUA CHEE SIONG

SINGAPOREANS don't expect overall consumer costs to budge much in the next 12 months, but think that core inflation - that is, price hikes outside of housing and private transport - could still inch up.

People here figured that inflation would hit 2.85 per cent in the year ahead, the quarterly DBS-SMU Singapore Index of Inflation Expectations (SInDEx) poll found in December. This was the third straight quarterly drop and a dip from the 2.88 per cent pinged by the previous survey three months prior.

Meanwhile, core inflation expectations for the year ahead rose from 2.92 per cent in September to 2.99 per cent in December, according to results released on Monday.

Singapore Management University (SMU) researchers, who have started tracking consumers' inflation expectations for key components of the price basket, found the expectation of cost increases unchanged at 3 per cent for healthcare and 2 per cent for food and utilities.

Expectations for education were logged for the first time at 3 per cent, and for recreation at 2 per cent.

Altogether, the results suggest an expectation of higher cost increases outside of private road transport and housing segments - "possibly as a reaction to expectation of stronger US dollar if US interest rate keeps rising, and higher domestic wages", the survey providers noted in a summary of the report. 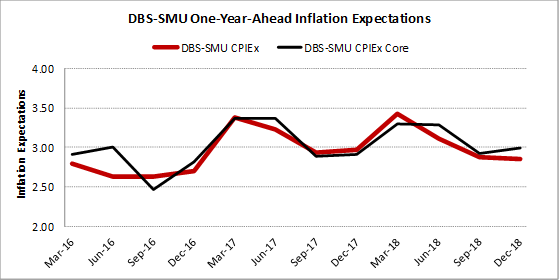 This could mean that expectations were "'anchored' fairly well despite various short-term uncertainties of the global economy", the researchers wrote, pointing to factors such as the US-China trade war and rate hikes at the United States Federal Reserve.

Taimur Baig, chief economist and managing director of group research at DBS, said: "Understanding the sentiment and expectations of Singaporeans with regard to inflation is critical for policymakers, analysts, companies, academics, and financial sector participants...

"As per the latest results, at 2.9 per cent, the one-year-ahead inflation expectations of Singaporeans were broadly unchanged in December, compared (with) the September 2018 survey.

"Given that the historical median has been 3.4 per cent since the inception of the survey in September 2011, this reflects a gradual downtrend in inflation expectations."

The Monetary Authority of Singapore adjusted Singapore's monetary policy to allow for the "modest and gradual" appreciation of the Singapore dollar at both its meetings in 2018, after six years without tightening.

The SInDEx survey was an online poll of some 500 people, backed by the Sim Kee Boon Institute for Financial Economics at SMU. DBS came on board for the first time as a co-sponsor and research partner, with bank economists joining their academic counterparts to analyse and interpret responses.

18 new Covid-19 cases in Singapore, including one in community

China does not have a timetable for 'unreliable entities list'

FIRST Reit's manager said on Sunday that it has a received a non-binding proposal regarding a proposed rental...

PRIVATE residential development Verdale sold 50 per cent of the 78 units launched on Saturday, in a project jointly...

Requisition notice by Oei Hong Leong 'without merit', will not be convening EGM: Raffles Education

RAFFLES Education said in a bourse filing on Saturday that the requisition notice by substantial shareholder Oei...

TEE International said in a bourse filing on Saturday that MDIS (Malaysia) Sdn Bhd has commenced two sets of...

18 new Covid-19 cases in Singapore, including one in community

Requisition notice by Oei Hong Leong 'without merit', will not be convening EGM: Raffles Education