SINGAPORE’S Central Provident Fund (CPF) bucked the overall global decline in assets under management (AUM), with its total assets growing 6.6 per cent to US$287 billion last year from US$269.1 billion in 2017.

The city-state also maintained its spot at ninth place globally in terms of assets, according to the latest World 300 research from Willis Towers Watson’s Thinking Ahead Institute released on Monday.

Among the top 20 funds, AUM also tumbled 1.6 per cent year on year to US$7.3 trillion, which accounted for 40.7 per cent of the total AUM in the rankings.

This marks the first year since 2012 that the top 20 pension funds’ share of the total AUM has fallen.

Here's what investors with US$3.4t are buying during Covid

“A tougher market environment in 2018 meant that AUM growth paused, but the underlying trend remains one of growing pension markets worldwide,” said Bob Collie, head of research for the Thinking Ahead Group.

“The pace of change in the investment world is a challenge, and scale is a huge advantage in a lot of ways. Many of the most interesting and important developments start with the largest funds, and as new investment ideas like the total portfolio approach and universal ownership gain traction in these organisations, they influence the whole market,” Mr Collie added.

Asia-Pacific continued to feature prominently, with seven pension funds in the top 20. 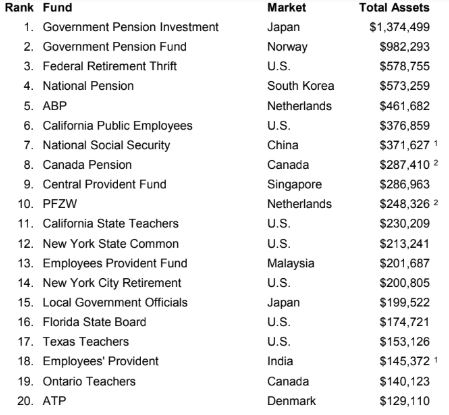 Asia-Pacific was the second-largest region in terms of AUM with pension funds accounting for 26.2 per cent of all assets in the research, behind North America at 45.2 per cent and ahead of Europe at 24.9 per cent.

In terms of annualised growth rate, Asia-Pacific grew by 5.2 per cent during 2013-2018, close behind North America which posted the fastest growth at 5.8 per cent. In contrast, Europe’s growth remained almost flat at 0.5 per cent.

Jayne Bok, head of investment in Asia at Willis Towers Watson, said: “Despite macroeconomic and global trade headwinds, Asia is still a growing region with a young population, and its long-term growth trajectory remains positive.”

“However, we should expect a general slowdown in (Asia’s) growth, in line with global markets,” Ms Bok said.

“To maintain and improve on this growth, in a region where geopolitical and economic events are becoming more and more unpredictable, it will be essential for Asia-Pacific funds to implement new, creative and innovative investment strategies to keep growth on an upward trajectory and to continue outperforming the market,” Ms Bok noted.

Asia-Pacific funds in the top 20, on a weighted average allocation, are predominantly invested in fixed income (53.8 per cent) and equities (39.2 per cent), while holding less in alternative investments and cash.

On the other hand, North America funds are more focused on return generation and therefore hold less fixed income and more in equities (46.7 per cent) and alternative investments and cash (33.9 per cent).

Among the top 300, defined-contribution (DC) assets grew 5.1 per cent last year, while defined-benefit (DB) assets inched down by 0.2 per cent.

DC pension plans allow employees and employers to contribute and invest funds over time to build up a pot of money for retirement, while DB plans are employer-sponsored and provide a specified payment amount in retirement.

The share of reserve funds – those set aside by a national government against future liabilities – shrank by 9.5 per cent, while hybrid fund assets – those with both DB and DC components – decreased by 4.6 per cent.Sovereign and public sector pension funds made up 68.5 per cent of the total AUM last year, with 145 such funds in the top 300. Sovereign pension funds represented US$5.1 trillion in assets, while sovereign wealth funds accounted for US$7.9 trillion.

Mr Collie also noted that a majority of the largest funds are now highlighting the importance of sustainability.

“ESG (environmental, social and governance) factors are now significant financial considerations. Beyond that, there’s also an evolving recognition of the role large investors play within society, and the responsibility that comes with it,” he said.

The research was conducted by not-for-profit investment research and innovation member group Thinking Ahead Institute, in conjunction with Pensions & Investments, an investment newspaper in the US.

[KUALA LUMPUR] Malaysia's consumer price index (CPI) fell for the sixth month in a row in August, declining 1.4 per...

[CHICAGO] Walmart will recruit more than 20,000 workers ahead of the US holidays to prepare for an expected surge in...

THE Maritime and Port Authority of Singapore (MPA) and the Singapore Maritime Institute (SMI) on Wednesday launched...