Ministry of Trade and Industry sees 2017 full-year growth coming in at 1-3%, says political risks and uncertainties have risen
Soon Weilunsoonwl@sph.com.sg@SoonWeilunBT
Even as Singapore's economy seems to be picking itself up for the rest of 2016, the new year may not be a good time to get one's hopes up too high.
ST PHOTO: LIM YAOHUI

EVEN as Singapore's economy seems to be picking itself up for the rest of 2016, the new year may not be a good time to get one's hopes up too high.

Next year's growth prospects will not deviate much from this year's as backlash against globalisation is set to intensify, according to forecasts from the Ministry of Trade and Industry (MTI) released on Thursday.

It sees 2017's growth at a "modest pace" of one to 3 per cent, essentially the same parameters that were in the government's earliest forecast for 2016.

"Political risks and uncertainties have risen, and could in turn lead to greater economic uncertainties," said Loh Khum Yean, MTI's permanent secretary, at a press conference on Thursday of 2017's outlook.

Singapore industrial land supply cut again for first half of 2020

"An increasing backlash against globalisation could further dampen global trade, which is already weak." 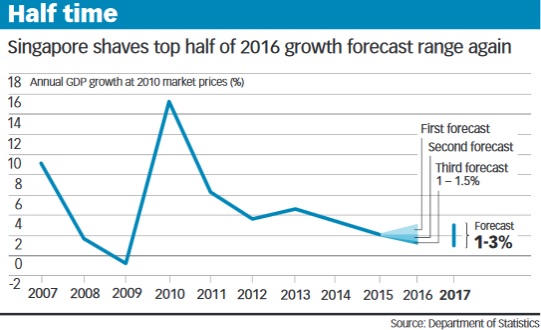 Singapore's government normally gives a full-year growth forecast of any given year for its economy, which is often viewed as a bellwether of global economic health, at the end of the preceding year. It then narrows this forecast as the given year progresses in response to the prevailing economic climate. Economists say the narrowing almost always lie within the initial range.

For one, the 2016 forecast range has been halved twice since the initial forecast. It now sits at between one to 1.5 per cent. The growth parameters for Singapore in 2017 were of cold comfort to economists, with some foreseeing that they will be lowered further. "We believe that this forecast range doesn't leave much room for the materialisation of downside risks to growth," said HSBC economist Joseph Incalcaterra.

"It's hard for us to share the government's optimism," said Nomura economist Brian Tan. "Our GDP growth forecast for 2017 is 1 per cent, which is at the low end of their forecast range. We suspect they will have to adjust this as we get into next year."

The modest 2017 outlook came even as Q3 2016's growth estimates were revised upwards, and as the government expects a better performance towards the end of 2016.

Folding in Q3 numbers and with only a quarter left to go for 2016, MTI's forecast of 1 to 1.5 per cent growth for 2016 would mean that Q4 would likely see better performance.

"MTI's central view is that the Singapore economy should avoid technical recession in Q4 2016," said Mr Loh, using a term that refers to two quarters of quarterly contraction. Looking ahead to 2017, Singapore's tourism and related sectors can expect to see a boost in demand as global economic outlook improves, said Mr Loh.

On a larger scale, improved growth in economies like the US, Japan, newly-industrialised economies and Asean should lift global growth, even as poorer performance in the eurozone and China are to exert a drag.

And yet, trade growth is sensitive to global swings. In the face of slower investment growth in US and China, as well as China's insourcing trends, "external demand for Singapore and regional countries may not see a significant uplift next year," said Mr Loh.

In addition, there are other underlying risks globally for Singapore's trade-reliant economy, including uncertainties over the timing and nature of Brexit, or the UK's exit from the European Union China's rising debt levels iare also cause for worry.

Then there's the increasing backlash against globalisation that has crept into MTI's view. This likely refers to "the incoming US president-elect Donald Trump who had made anti-globalisation, immigration and China-specific remarks during his campaign," said OCBC economist Selena Ling.

Already, Mr Trump had made it clear that he would issue a note of intent to withdraw the US from the Trans-Pacific Partnership (TPP) on his first day in office. The mega trade pact effectively requires its ratification to come into effect.

To this, Mr Loh said on Thursday that TPP signatories are thinking about how they can take the next step in negotiations, even as they work to ratify the deal domestically.

Beyond Trump, prospects for free trade are still slim in 2017, adding more pressure on Singapore's economy.

CATALIST-LISTED Advancer Global has pointed to miscommunication as the reason for its failure to disclose that its...