Vivien Shiaovshiao@sph.com.sg@VivienShiaoBT
SINGAPORE saw both its headline and core inflation pick up in December, according to the latest Department of Statistics consumer price index (CPI) released on Wednesday.
PHOTO: ST FILE

SINGAPORE saw both its headline and core inflation pick up in December, according to the latest Department of Statistics consumer price index (CPI) released on Wednesday.

Headline inflation rose to 0.5 per cent year on year in the last month of 2018, up from November’s figure and economist expectations, both of which were 0.3 per cent.

Core inflation, which strips out the cost of accommodation and private road transport, rose to 1.9 per cent. This was slightly higher than the 1.7 per cent recorded in the preceding month, mainly due to larger increases in the costs of services and retail items.

For December, headline inflation was pushed up by a larger increase in the cost of services and retail items, as well as a slower pace of decline in accommodation costs.

Services inflation increased to 1.5 per cent in December from 1.2 per cent previously, due to a stronger pickup in holiday expenses and airfares, as well as a smaller decline in telecommunication services fees.

The overall cost of retail items rose by 1.7 per cent, faster than the 1.1 per cent increase in November. This was mainly because of larger increases in the prices of clothing & footwear and household durables.

Food inflation was 1.4 per cent in December, unchanged from the preceding two months, as price increases for both non-cooked food items and prepared meals remained broadly the same.

The cost of electricity & gas rose by 14.6 per cent, lower than the 15.4 per cent increase in November. The lower rate of inflation was due to the effect of the phased nationwide launch of the Open Electricity Market (OEM) on electricity prices.

Private road transport costs fell by 3.7 per cent, slightly faster than the 3.6 per cent decline in the previous month. This was because even though the fall in car prices moderated in December, its effect was more than offset by a slower pace of increase in petrol prices.

Accommodation costs decreased by 1.9 per cent, moderating from the 2.1 per cent decline previously, due to a more gradual fall in housing rentals. 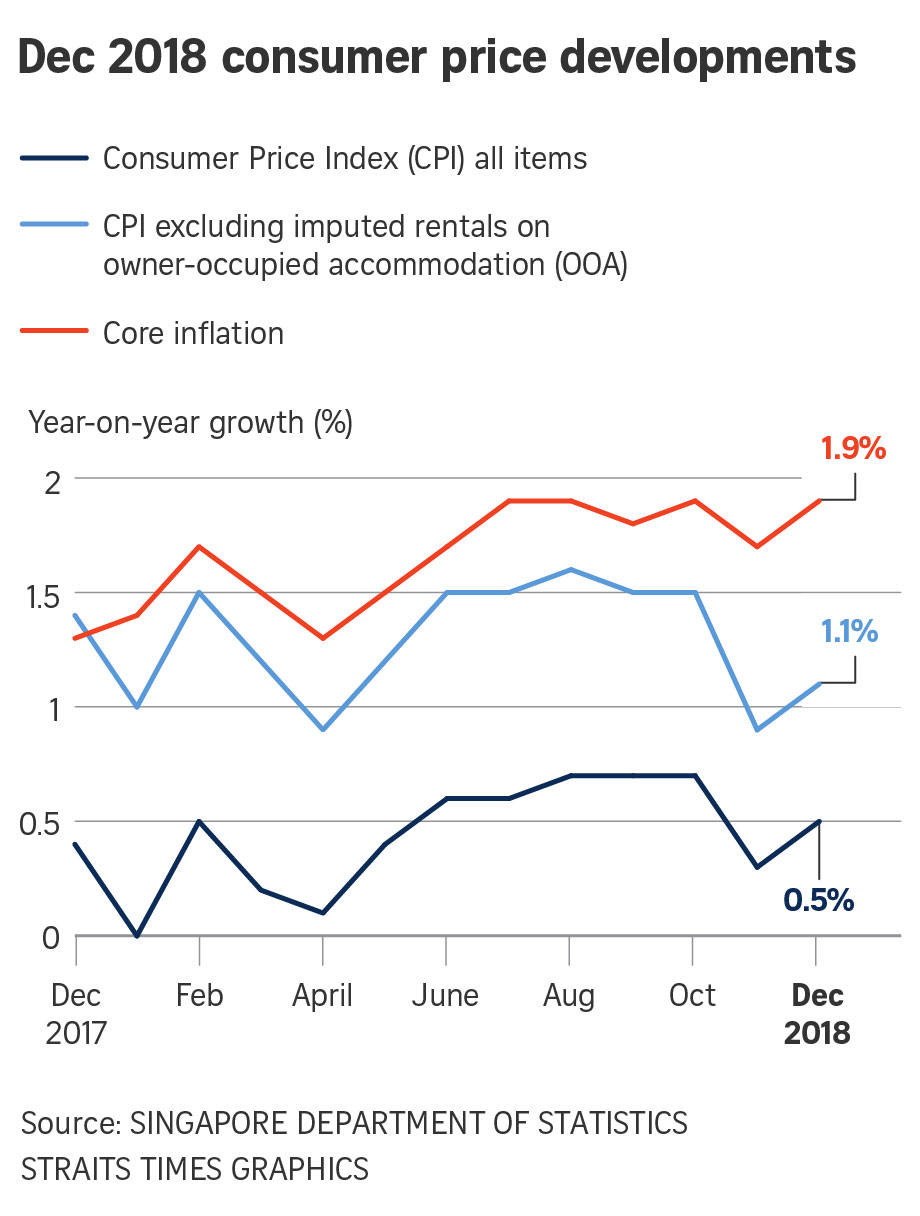 In its outlook, the Monetary Authority of Singapore (MAS) and the Ministry of Trade and Industry (MTI) noted that external sources of inflation have generally increased over 2018. Global oil prices came in higher on average in 2018 as compared to 2017, while non-oil import prices have also picked up from their trough in Q1.

On the domestic front, the improving labour market should underpin a faster pace of wage growth in 2018 and 2019.

“As domestic demand strengthens further, there could be a greater pass-through of higher import and labour costs to consumer prices. However, the extent of overall price increases will be capped by greater market competition in several consumer segments, such as telecommunications, electricity and retail,” said the MAS and the MTI.

Headline inflation for 2019 is projected to pick up to 1-2 per cent as the overall drag from accommodation and private road transport costs lessens. Meanwhile, core inflation is expected to come in within the forecast range of 1.5-2.5 per cent this year.

Grab and Microsoft to help some drivers transition to tech careers

Barrett confirmed to US Supreme Court in Trump pre-election triumph

[HONG KONG] Jack Ma, the former English teacher who co-founded Alibaba Group Holding with US$60,000, is poised to...

[NEW YORK] The US Environmental Protection Agency is considering changes to labels for gasoline containing higher...

[SINGAPORE] In the modern republic of Singapore, several seemingly ordinary people working in offices or driving...

Grab and Microsoft to help some drivers transition to tech careers

Hotels roll with the punches to keep rooms occupied