Singapore's wealth per adult among the highest in the world

Claire Huanghuangjy@sph.com.sg
Even as growth slows, Singapore's wealth per adult remains among the highest in the world, led by high savings, asset price increases, and a favourable rising exchange rate from 2005 to 2012.
ST PHOTO

EVEN as growth slows, Singapore's wealth per adult remains among the highest in the world, led by high savings, asset price increases, and a favourable rising exchange rate from 2005 to 2012.

In the next five years, wealth per adult here is projected to rise 2.2 per cent per annum to hit US$309,000 in 2021, said the Credit Suisse Research Institute on Tuesday in its seventh annual global wealth report.

The report gives a flavour of global wealth development and provides estimates of global household wealth levels in all regions and population segments.

Financial assets make up 54 per cent of gross household wealth in Singapore, a ratio similar to that of Switzerland and the United Kingdom. The average debt of US$54,800 is moderate for a high-wealth country, equalling just 17 per cent of total assets, said the report.

It added that Singapore publishes household sector balance sheet data, which means that wealth information is more reliable compared to that of most of its neighbours in South-east Asia.

In terms of wealth distribution, Singapore is only moderately unequal with 18 per cent of its people having wealth below US$10,000, compared to 73 per cent globally. 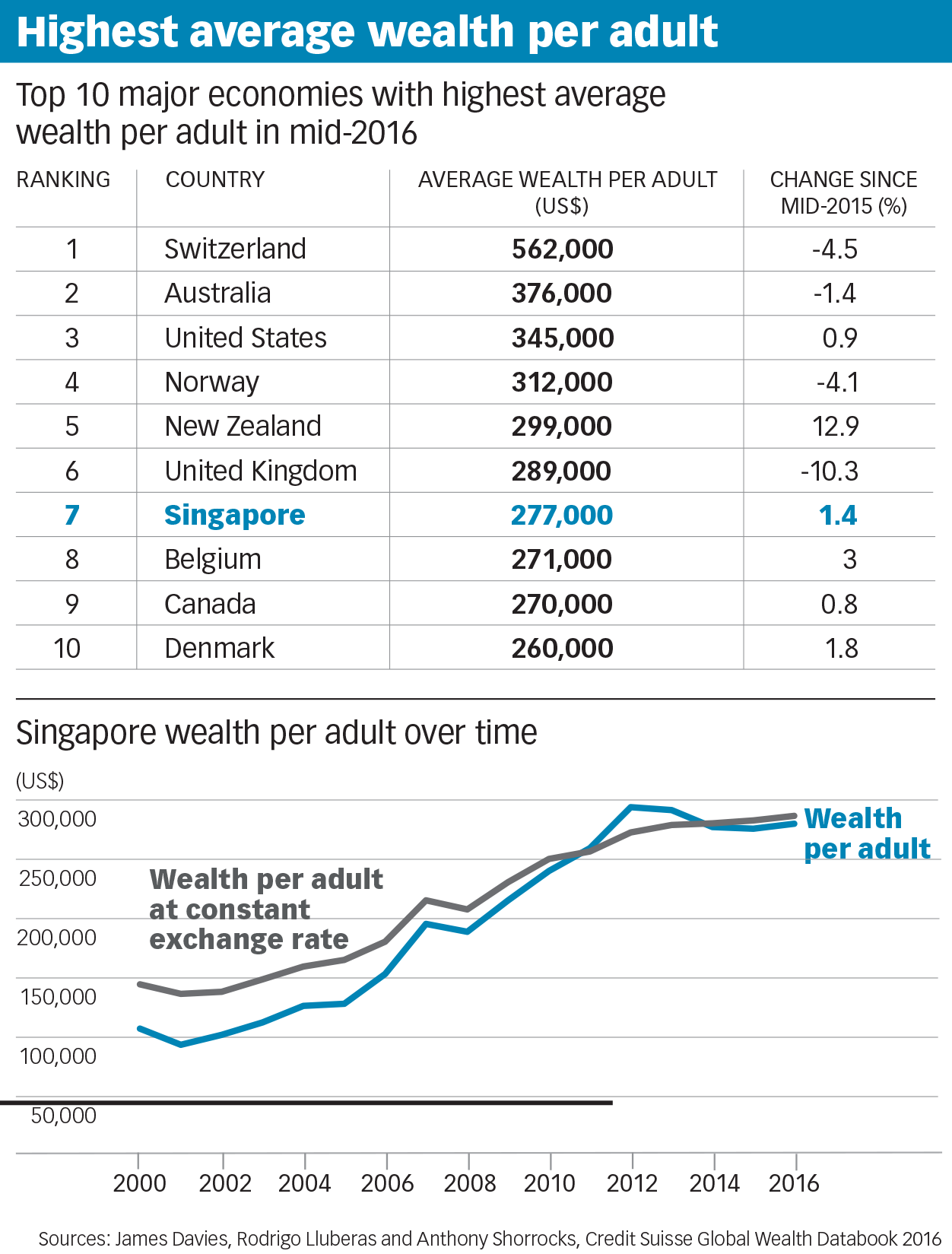 Also noteworthy is that the number with wealth above US$100,000 is six times the world average.

About 5 per cent of adults here, or 222,000 individuals, are in the top one per cent of global wealth-holders - a very high number given that the country has just 0.1 per cent of the world's adult population.

Meanwhile, the number of ultra-high-net-worth individuals grew even faster at 14.2 per cent to 885.

Overall, total global wealth in 2016 edged up 1.4 per cent to US$256 trillion, in line with the growth in the world's adult population. Correspondingly, average wealth per adult of US$52,800 remained unchanged.

The report highlighted the impact of adverse currency movements, which caused wealth to fall in every region except in the Asia-Pacific. Downward movement in equity prices and market capitalisation also led to a relatively small increase in household financial wealth.

Among individual countries, Japan recorded the highest growth in total wealth, followed by the US. The UK, on the other hand, suffered a sharp drop in wealth, hit by the Brexit vote which triggered a sharp decline in exchange rates and stock market.

John Woods, Credit Suisse's chief investment officer, Asia Pacific, said: "The consequences of the 2008-2009 recession will continue to have a material impact on growth, which is pointing more and more towards a long-term stagnation. The emergence of a multi-polar world, confirmed by the impact of the Brexit vote in the UK and by the US Presidential election, is likely to exacerbate such a trend, which could possibly lead to a new normal lower rate of wealth growth."

The Asia-Pacific region, he noted, is now the second largest wealth region globally and it continues to see steady growth in total wealth albeit at a slower pace.

REX International on Thursday posted a net loss of US$21 million for the half-year ended June 30, 2020, compared...

[BEIJING] Two cities in China have found traces of the new coronavirus in imported frozen food and on food packaging...

Franklin Templeton in talks to back Allbirds

[NEW YORK] Franklin Templeton is in talks to invest in shoemaker Allbirds  at a premium to its US$1.4 billion...

China's Huawei, ZTE set to be shut out of India's 5G trials

[NEW DELHI] China's Huawei Technologies and ZTE are set to be kept out of India's plans to roll out its 5G networks...