FITCH Solutions has revised its forecast for the Singapore dollar’s (SGD) average exchange rate this year to a stronger S$1.3950 per US dollar (USD), from its previous forecast of S$1.4250.

The market insights firm also revised its average forecast for next year to S$1.3800 per USD, from S$1.4100 earlier.

“Over the short term, we expect some stability in the SGD after a strong rally in early June following the reopening of the economy and a bout of USD weakness,” Fitch Solutions said in a commentary on Monday.

It foresees “some weakness” in the greenback in the longer term, given that the likely global economic recovery in 2021 will sustain risk appetites. In turn, this is expected to cause Singapore’s currency to strengthen slightly, the firm added.

Since Fitch Solution’s last update on the SGD on April 30, the currency has bucked the firm’s view for more weakness. It instead strengthened by 1.4 per cent to trade at S$1.3904 per USD as at July 21, compared with S$1.4099 earlier.

That said, the SGD’s lingering weakness in May, before the country eased its “circuit-breaker” restrictions, led to the year-to-date average continuing to weaken slightly to S$1.3978, from S$1.3950 previously.

The currency is likely to remain broadly stable around current levels for the remainder of this year, Fitch Solutions wrote. 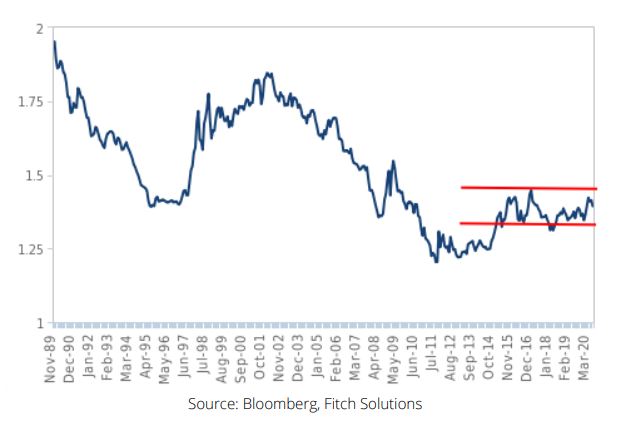 “From a technical perspective, the worst appears to be over for the SGD for now, having broken through the resistance level at S$1.4100/USD on June 1,” the research team said. Singapore exited the “circuit breaker” on June 1, entering the first phase of its economic reopening.

The early-June period also coincided with the economic reopening in other parts of the world, which led to a bout of USD weakness as risk appetite returned on the back of improving economic data. This further explained the strength of the SGD’s rally, Fitch Solutions noted.

Since then, Singapore’s currency has stayed stronger than the S$1.4000/USD support level, although it has not managed to break the next resistance level of around S$1.3800/USD.

It also pointed out that the novel coronavirus outbreak appears to have come under control in the city-state, and this will further support the economic recovery as restrictions could ease further.

Although the government has warned the nation to be ready for a second wave, Fitch Solutions nonetheless expects the reopening to continue in a phased manner over the rest of this year. This is in turn likely to support the SGD against further depreciatory episodes.

Fitch Solutions does not expect the Monetary Authority of Singapore (MAS) to ease policy in H2 2020, after a slight easing in March.

The firm believes MAS will remain neutral in its management of the S$NEER band, which supports the former’s view for the currency to remain broadly stable for the rest of the year.

The firm is of the view that the central bank will adopt a wait-and-see approach, as further easing at this point may have a limited impact on the economy. This is because external demand is still weak, given the poor economic fundamentals, while the remaining travel restrictions render the notion of boosting tourism moot.

Furthermore, the SGD “remains vulnerable to further selloffs amid a fragile and uneven global economic recovery, and MAS would want to guard against this by keeping monetary policy on hold over the short term”, Fitch Solutions opined.

It continues to see the SGD on a slightly stronger footing in 2021, given that it expects Covid-19 related risks to have at least begun to recede by the end of 2020.

For the next 12 to 24 months, the USD is set to remain weak, given the likelihood for sustained risk-on conditions, widening budget deficit due to expansionary fiscal policy, and interest rates staying lower for longer.

However, Singapore has a diminished growth advantage over the US, and this is still the main factor holding the research team back from a stronger SGD forecast in 2021. Fitch Solutions forecasts real gross domestic product growth of 2.6 per cent next year for Singapore, below the 3.7 per cent predicted for the US, which makes the SGD less attractive from a total returns perspective.

THE Singapore Medical Council (SMC) may take legal action against online platform DoctorxDentist, after the startup...

[SINGAPORE] There were 12 new coronavirus cases confirmed at noon on Sunday, taking Singapore's total to 58,160.

Hong Kong to give HK$5,000 to those testing positive for Covid-19: RTHK

Do China fintech giants pose a risk for European banks?

[PARIS] China's Ant group may have been dealt a setback with the shelving of its initial public offering (IPO) but...

[HONG KONG] Hong Kong hopes to be part of the first group of economies to join the Regional Comprehensive Economic...