S'pore manufacturing may show the way for future economy

Soon Weilunbtnews@sph.com.sg@SoonWeilunBT
Observers say manufacturing's performance is an early indication of how its restructuring has borne fruit.
ST PHOTO

TAKE a look at the underdog manufacturing sector and you may see what Singapore's economic restructuring can turn out to be, observers told The Business Times.

Long deemed as being in decline, the sector's surprise output surge at end-2016 has suddenly made it everybody's darling.

There's even an übermensch quality to it: its performance was so stellar, it helped lift overall economic growth well beyond earlier forecasts.

Observers say manufacturing's performance is an early indication of how its restructuring has borne fruit. "If we haven't been moving manufacturing to the higher-value space, it would have hollowed out, and not be as competitive as other hubs in the region," said Song Seng Wun, CIMB economist.

But there's still some way to go - and the sector has to stick it out, according to Douglas Foo, president of Singapore Manufacturing Federation.

"If we continue on with this traction of moving in the right direction, we'll be able to continue to ride this wave that we saw," he said. "The challenges we face now are a lot tougher." 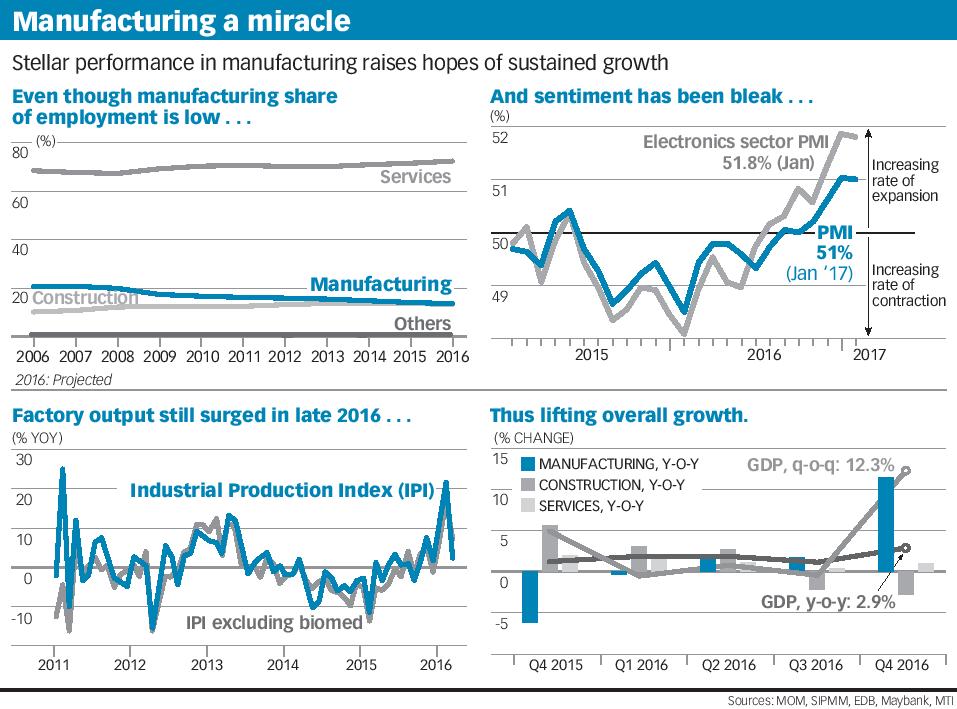 Manufacturing's share of employment has been declining every year over the past 10 years. It employed only 13.6 per cent of the workforce in 2016, down from 20.7 per cent a decade ago.

The sector's purchasing manager's index (PMI) also recorded more than a year of contraction, before picking up in September 2016.

Industrial production, an indicator of factory output which is closely linked to gross domestic product (GDP) numbers, started posting healthy growth in the second half of 2016. It ended the year with a big bang, chalking a strong 22.1 per cent year-on-year jump in December.

Semiconductor led the surge. The cluster, which accounts for about 17 per cent of manufacturing output, rose 94.3 per cent in December.

Manufacturing's strong showing helped raise GDP growth for 2016 to 2.0 per cent, far beyond the government's forecast of 1.0 to 1.5 per cent range. "We were surprised on the upside in the pickup of this (manufacturing) growth momentum," the Ministry of Trade and Industry's top official Loh Khum Yean said in a recent press conference.

Manufacturing's rebound rode on a recent improvement in global demand, said economists, with data from Taiwan, South Korea and China seeing the same upswing. PMI numbers and business expectations surveys also showed that firms expect more demand. A dip in January 2017's industrial output numbers might have cast some doubt on the pace of recovery, but observers attributed this to the Lunar New Year effect, where production lines in the region shut down.

But there's also something more fundamental for manufacturing's resurgence. Structural shifts in the sector have put in place building blocks that helped brighten its growth prospects, according to observers.

This means the earlier move towards advanced manufacturing is starting to bear fruit, thus allowing it to tap the rise in global demand, said ANZ economist Ng Weiwen.

"It's been moving towards higher-value added segments like integrated circuits, additive manufacturing ... firms could leverage this pick-up in demand; those efforts are now bearing fruit," he said.

Singapore's excellent infrastructure is crucial for manufacturing as it moves up the value chain. Jagadish CV, chief executive officer of semiconductor firm Systems on Silicon Manufacturing Company, said: "Things like continued water, electricity supply ... this predictability is crucial for advanced manufacturing - the factories have to run 24/7."

Capacity has also been expanding recently, allowing the sector to latch onto any upswing in global demand when it arises. Mr Jagadish said that the build-up in the semiconductor cluster's production capacity helped manufacturing ride on the global demand surge.

With the building blocks in place, observers said the manufacturing sector is poised to tap foreseeable growth, like the demand for components used in driverless cars, or sensors for the Internet of Things.

But more work needs to be done for the sector to hit the Committee on the Future Economy's target for manufacturing - a contribution of 20 per cent to GDP, according to observers.

There are clear advantages for manufacturing to play a major role in Singapore's economy, because it "generates strong spillovers", said the committee's report.

In 2012, every manufacturing value-added dollar generated a higher S$0.34 of spillovers, when compared with 2005's S$0.25. This was due to its stronger linkages with other sectors. Thus, for manufacturing to continue to tap future global demand, observers say it has to replicate the semiconductor cluster's success in deploying new technologies and processes into other clusters.

"There are many new processes and technologies out there, such as 3D printing and rapid prototyping," said ANZ's Mr Ng. "There's a need to harness these to raise productivity."

Skillsets also must be raised to match the new demands in the sector, say other observers. "In terms of competency of the labour force in the sector, the weakness is still there," said Mr Jagadish.

"This goes from managing the robots and software, to being able to do the predictive maintenance, not unlike what SMRT Corporation is doing for the railway system," he added.

The coming Budget will be crucial in setting how the pace of restructuring in the sector can be sustained, said CIMB's Mr Song.

But at the end of the day, how much manufacturing can contribute to the economy depends on how much Singapore can shape the outside world to its desires, according to observers. Singapore has been more of a price-taker than a price-maker in the global market. In today's less friendly world, its clout is even smaller, they say.

UK's Sunak to throw lifeline to some furloughed workers

Most UK firms unprepared for end of Brexit transition: BCC

[LONDON] A swathe of British businesses are unprepared for the end of the Brexit transition period at the turn of...

[LONDON] The British government will not deliver its planned budget later this year due to uncertainty created by...

[SAN FRANCISCO] Web giants including Facebook struck a deal on Wednesday with global advertisers to get on the same...

Weak travel demand aside, SIA has major problems to fix

Fragrance Group to get new CFO on Nov 2