Jamie Lee leejamie@sph.com.sgJamieLeeBT
The region has the largest public investment institutions, with four in the top 10 from China and Japan. The four are the People's Bank of China (PBOC), the Bank of Japan - which would includes assets of the Ministry of Finance - the Japan's Government Pension Investment Fund and the China Investment Corporation.
PHOTO: REUTERS

A STRONGER world economy boosted public pension fund, sovereign fund and central bank assets to US$33.5 trillion at end-2016, up 1.4 per cent from a year ago, according to a think tank that tracks the performance of these large public investors.

And amid uncertainty over the extent of reflation after a period of "extraordinarily loose" monetary policies, pension funds and sovereign wealth funds are still on the prowl for yield through "real assets" that have now extended beyond property into green financing, said OMFIF, a London and Singapore-based think tank.

The data looked at the performance of 750 public institutions in the world, with their AUMs representing about 45 per cent of the world's GDP. The list has 165 central banks, 92 sovereign funds and 493 public pension funds.

The net increase of US$475 billion across these ranked global public investors marks a turnaround from the previous year, when total assets fell by US$749 billion, or 2.2 per cent. Asia Pacific remains the largest region by assets under management (AUMs), with US$12.7 trillion, making up 37.9 per cent of the total, according to data from OMFIF.

The region has the largest public investment institutions, with four in the top 10 from China and Japan. The four are the People's Bank of China (PBOC), the Bank of Japan - which would includes assets of the Ministry of Finance - the Japan's Government Pension Investment Fund and the China Investment Corporation. 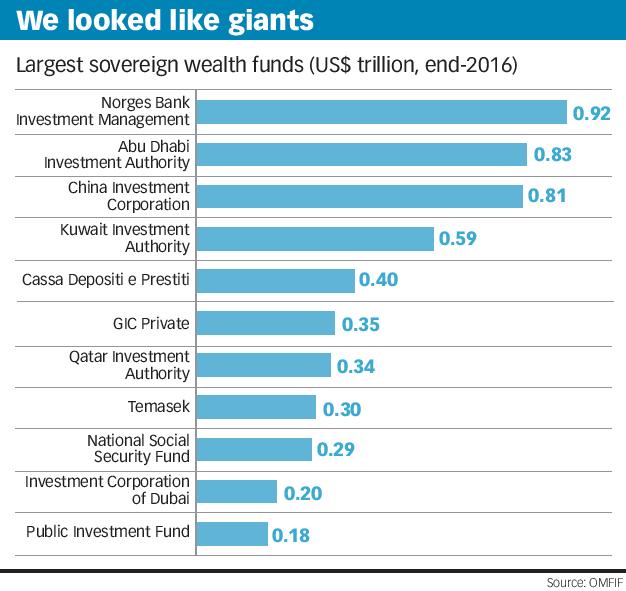 Overall figures showed that the increase in assets was largely lifted by performance of pension funds, which had their assets rise by US$435 billion. The stronger performance reflects upward revision of growth forecasts, and greater emphasis on fiscal policies that may raise employment, consumption and inflation, the think tank said.

For Asian central banks, the decline partly reflects the pressures facing the region's currencies as a result of capital outflows, concerns about Chinese growth and the stronger dollar. "In some cases, these pressures required foreign reserves to be used for stabilisation, while the rising dollar saw the value of non-dollar reserve assets fall," the report said.

It added that in particular, the PBOC had used some funds to finance projects in the Belt and Road initiative, while many countries in the region sought to pay down their debts as the dollar rose, contributing to the fall in their assets.

Looking ahead, the think tank noted that after a "protracted period of extraordinarily loose monetary policy" to support economic recovery in the wake of the financial crisis, policy-makers in the world's major central banks are considering gradually raising interest rates. "This will create opportunities as well as problems for global public investors, with the exit from unconventional policies expected to be unconventional in its own right," it said.

"The shift in US policy towards fiscal expansion under President Donald Trump is expected to create some inflationary pressures for the global economy, although questions remain over the feasibility of these plans. Structural factors such as weak demographics are expected to keep any increases in inflation and interest rates gradual and constrained."

Public investors remain attracted to real estate, in part because of the low returns on bonds. "As equity markets adjust to the 'Trump bump', which inflated stocks and the dollar in late '16 and early '17, and prices possibly trending downwards, the relative performance of real estate is expected to improve," the report added.

The asset allocation survey - which polled 31 global public investors from around the world that hold total assets of US$4.21 trillion - also showed that 38 per cent of respondents plan to increase green bond investments, while 35 per cent plan to invest in renewables over the next 12 to 24 months.

Over the next 12 months, 29 per cent of respondents are also planning to increase their exposure to financials, 23 per cent are raising their investments in energy, and 22 per cent in telecommunications.