ROBUST stock markets may have carried Temasek Holdings' investments to 13 per cent returns in fiscal 2017, but they have also made the investment firm wary of expensive assets.

The investment company owned by the Singapore government offered an outlook of an improving global economy tempered by pricey assets as it reported a record-high net portfolio value of S$275 billion as at March 31, 2017.

The latest one-year performance is in contrast to the year-ago return of -9 per cent, and beats Temasek's one-year risk adjusted hurdle rate of 7 per cent, which represents the firm's target return for its portfolio over that period.

Over a 20-year period, Temasek's rolling annualised return came to 6 per cent, which matched its year-ago long-term return but fell short of its 20-year hurdle rate of 9 per cent.

Credit Suisse teams up with Qatar for direct lending venture

High valuations led Temasek to divest S$18 billion, S$2 billion more than the S$16 billion that it deployed. It was the first net divestment year for the firm since fiscal 2009.

"Given the market environment and high valuations, we see less investment opportunities because we just find that generally speaking the market pricing is a bit too high," Temasek joint head of investment group Chia Song Hwee said at a press briefing.

"But on the flip side, it allowed us to exit some of our positions or sell part of our stakes, given valuations may be trading quite close to our intrinsic value." 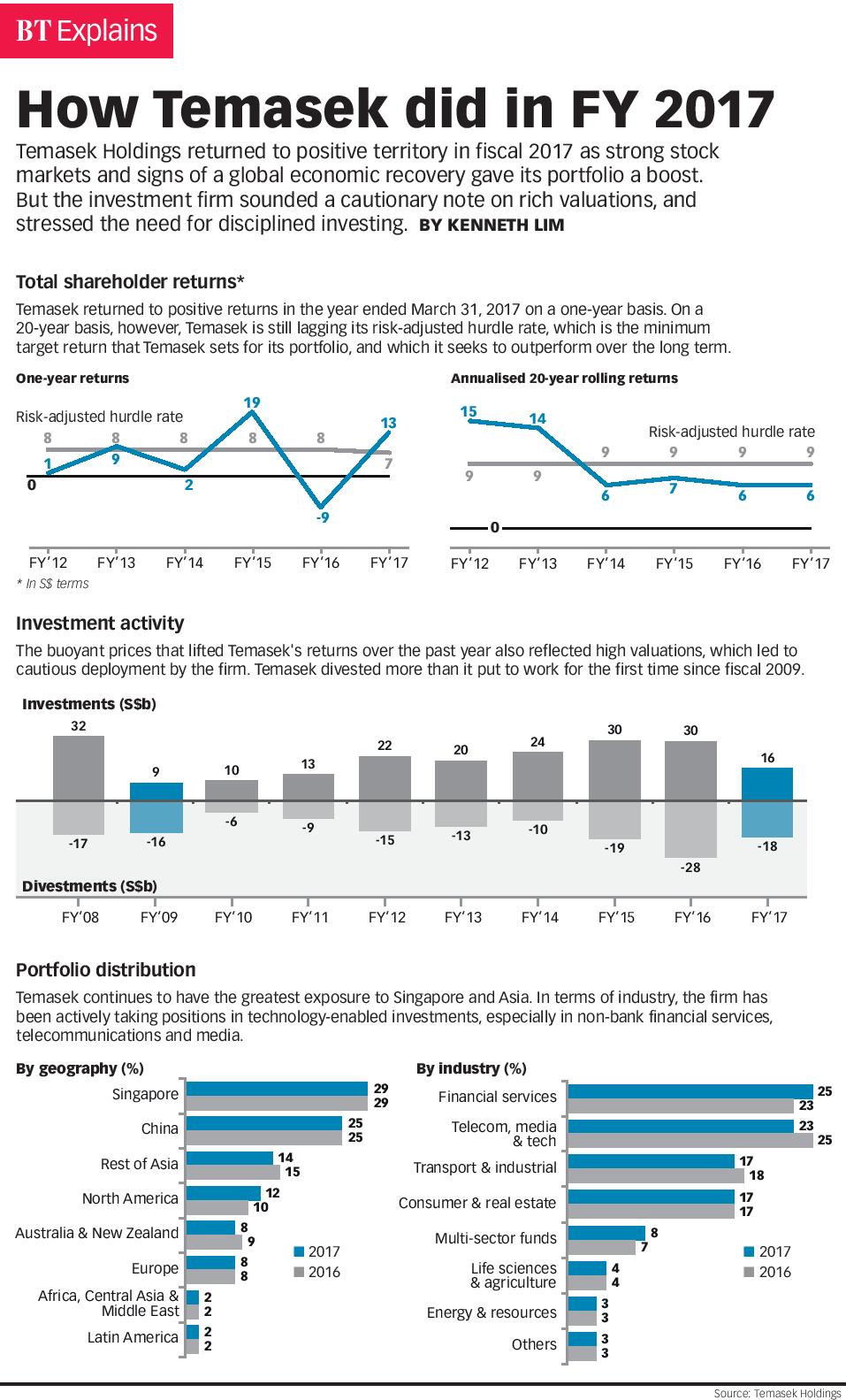 That dearth of reasonably priced deals also helped to explain unlisted assets taking a 40 per cent share of the total portfolio, up from 39 per cent a year ago. When publicly traded assets are rich, Temasek can often find relatively better value through privately negotiated deals where the target company is unable to access capital through certain means or is looking for a long-term investor, Temasek executives said.

Rohit Sipahimalani, joint head of portfolio strategy and risk, said: "Today, because we see public market valuations so expensive, we have done more private investments, and part of it is basically we managed to get them at acceptable values because of an edge we may have, because of value that the company sees in us."

Looking ahead, Temasek expects the global economic recovery to continue, with caveats.

In Asia, China should be able to "secure a successful rebalancing of its economy" towards more domestic consumption-led growth in higher productivity and new economy sectors, he said. India, Indonesia and the Philippines are promising in the medium term for growth and the fiscal flexibility to respond to new circumstances.

Singapore's outlook, meanwhile, is anchored by efforts to restructure the economy.

In the United States, which received the largest share of new investments in FY17, how the Federal Reserve raises interest rates and unwind its balance sheet will present a risk to liquidity, Mr Buchanan said. Notwithstanding that, America should remain a mild driver of global growth as business spending and sentiment pick up.

In Europe, Mr Buchanan expects domestic demand growth to moderate slightly. Political changes, such as Britain's pending exit from the European Union, can present both opportunities and risks. Uneven access to capital in Europe can also open doors, he added.

"This may present some opportunities for us to invest in good European companies that are looking to grow," Mr Buchanan said.

Amid all that, he expects valuations to "edge down". In terms of sectors, Temasek has been increasing its investments in companies that are harnessing technology within their industries. The technology, life sciences, agribusiness, non-bank financial services, consumer, and energy and resources sectors now form 24 per cent of Temasek's portfolio, up from 8 per cent six years ago.

Those investments have generally outperformed the overall portfolio, Temasek managing director for investment Tay Sulian said. "As a whole, the deliberate repositioning of our portfolio over the past six years has had a positive impact on our returns."

Swedbank is being investigated for suspected market abuse

[STOCKHOLM] Swedbank, one of Sweden's biggest banks, is being investigated by the local watchdog for suspected...

Airbus wins lawsuit over payments to consultants linked to scandal

[PARIS] Airbus won a Paris lawsuit over its decision to halt payments to a Hong Kong consulting firm after an...

[BRUSSELS] The European Commission on Friday urged the 27-country bloc to work together to speed up the rollout of...

[SAINT-FONS] A French company is collecting fish skins that would otherwise wind up in restaurant trash cans,...