The Federal Reserve raised the benchmark interest rate on Wednesday for the third time this year but showed no indication it would be more aggressive in efforts to head off inflation.
PHOTO: REUTERS

[WASHINGTON] The Federal Reserve raised the benchmark interest rate on Wednesday for the third time this year but showed no indication it would be more aggressive in efforts to head off inflation.

The central bank boosted the lending rate to 2.0 per cent to 2.25 per cent, a quarter-point increase in the target range, and more are on the way, with no hint of a pause.

It once again said "further gradual increases" would allow continued expansion of the economy while keeping inflation around the Fed's two percent target.

However, the closely scrutinised statement from the rate-setting Federal Open Market Committee removed a longstanding phrase which described the Fed's rate stance as providing stimulus to the economy.

Fed Chairman Jerome Powell said the gradual pace is helping to support the continued economic expansion, even as the benefits have not reached all Americans.

"Many of our country's economic challenges are beyond the scope of the Fed but my colleagues and I are doing all we can to keep the economy strong, healthy, and moving forward," Mr Powell said at a news conference following the announcement.

The statement on the unanimous decision no longer describes the rate level as "accommodative," while continuing to note the strong gains in economic activity and employment.

But Mr Powell stressed that that was not an indication of a change "in the path of policy."

The Fed has now raised the key rate eight times since late 2015, with one more expected in the final meeting of the year in December.

The central bank's decision comes amid worsening global trade tensions as President Donald Trump has doubled down on his confrontational stance, with steep tariffs on hundreds of billions of dollars in goods.

Mr Powell said the Fed was hearing a "rising chorus" of concerns from businesses around the country about uncertainty and rising costs.

US companies worry about "disruption of supply chains, materials, cost increases, and loss of markets and things like that."

The Fed's concern is that that could lead to the "loss of business confidence and that can reduce investment."

However, with stock markets soaring, he said he did not see "troubling" vulnerabilities in financial markets.

Asked about Mr Trump's criticism of Fed rate hikes which he said could undermine the booming economy, Mr Powell said the central bank did not take "political factors" into consideration.

The Fed members "try to set monetary policy to achieve maximum employment in a complex of price stability.... We don't consider political factors or things like that," Mr Powell told reporters.

In their quarterly forecast, the central bankers did not signal that they would have to act more aggressively to constrain prices, as the inflation forecast for next year was slightly lower than in June, while the interest rate outlook was unchanged.

The median forecast continues to expect the federal funds rate to end the year at 2.4 per cent, implying one more rate hike - as is widely expected in December.

The rate is seen rising to 3.1 per cent in 2019 - the same as the last forecast - which indicates three more moves, as inflation is expected to hold at the Fed's goal of two percent.

"The message...was far less hawkish than the worst case in Wall Street forecasts," Chris Low, of FTN Financial, said in a research note. "As a result, bonds are rallying."

The Fed's preferred price index, based on consumer spending, rose 2.3 per cent in the 12 months ended in July, the strongest since March 2012. But excluding volatile food and energy prices, the inflation rate rose 2.0 per cent, which hits the Fed's goal.

However, while the median forecast for the target interest rate is unchanged, the range is spread widely with an equal number of central bankers expecting two, three or four increases in 2019.

And Mr Powell noted that forecasts were highly uncertain, with the actual decision depending on how the economy and inflation evolve. 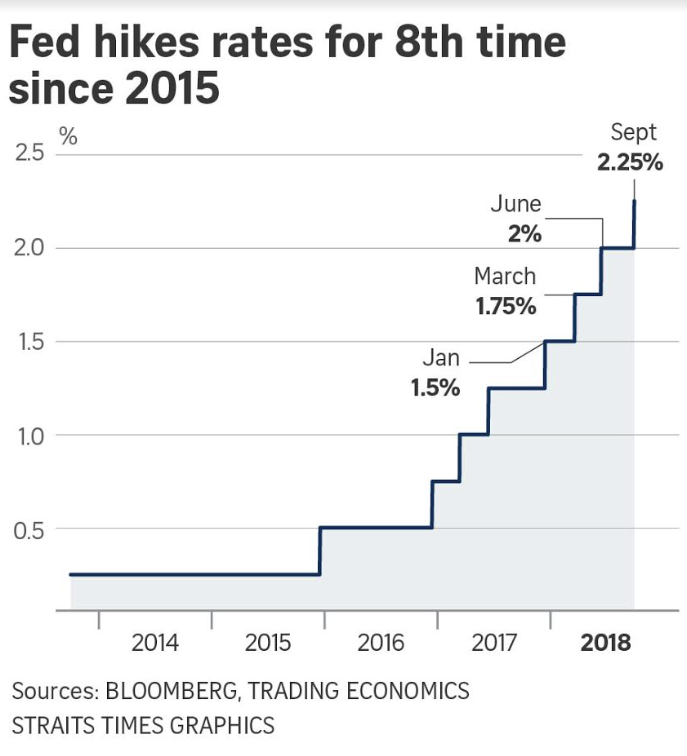 Hong Kong: Stocks close lower with eye on US

[SEOUL] South Korea's LG Chem reported a profitable fourth quarter on Wednesday on demand for its car batteries but...

[LONDON] British mobile networks Vodafone , O2 and Three are teaming up to build and share 222 mobile masts to boost...

[SYDNEY] Australian shares closed lower on Wednesday, dragged lower by losses in the resources sector, while a...

TikTok owner Bytedance's sales doubled to US$35b despite US ban