Virus outbreak to buffet retail further after 2.8% fall in 2019

OCBC notes Q1 GDP could contract; all eyes on whether official 2020 forecast will be cut
Janice Hengjaniceh@sph.com.sg@JaniceHengBT
Singapore retail sales are expected to be weak this year amid novel coronavirus pressures, following a 2.8 per cent fall in 2019, which was the steepest decline in six years.
PHOTO: ST FILE

SINGAPORE retail sales are expected to be weak this year amid novel coronavirus pressures, following a 2.8 per cent fall in 2019, which was the steepest decline in six years.

Further contraction is likely. She forecasts a one per cent fall in this year's retail sales; with the Covid-19 outbreak, retail sentiments are likely to remain sluggish into January, she said. (Data for January 2020 will be released only in March.)

February may bear the full brunt of the slump, with the disease alert level having been raised this month; consumers are cutting back on discretionary spending, she added.

UOB economist Barnabas Gan said that with the virus hurting tourism, and considering how it hit retail sales during the 2003 Sars outbreak, "a sustained fall in retail sales value in the coming two months is possible".

The full-year (2019) figures came with December's data from the Department of Statistics on Wednesday. Retail sales fell 3.4 per cent year on year in December, worse than economists' estimates of a 2.5 per cent fall. It was the 11th straight month of year-on-year decline.

Total retail sales value for the month was S$4.2 billion, of which 6.8 per cent came from online sales. Amid virus fears, "the shift from physical window-shopping to online e-commerce sales may grow" as consumers avoid crowds, said Ms Ling.

Excluding motor vehicles, retail sales were up a marginal 0.1 per cent year on year. Motor vehicle sales dived 24.1 per cent in December, which Mr Gan attributed to rising Certificate of Entitlement premiums. 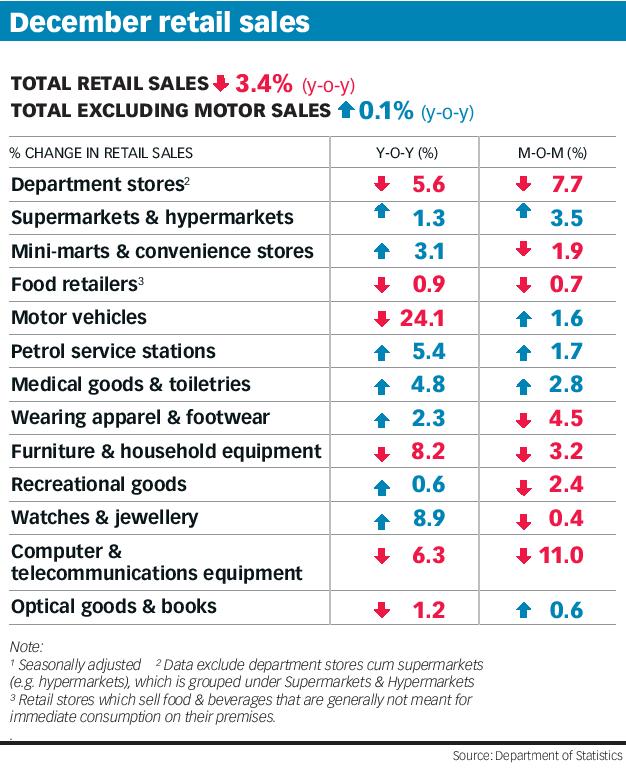 Rising cross-border demand from consumers, shifting away from local purchases, is the most probable factor for December's retail softness, said Mr Gan. Lower sales were seen for "goods that are easily substitutable with cross-border purchases", such as furniture and household equipment, and telecommunications and computers.

In contrast, higher sales were seen for expensive goods such as jewellery, and in "domestically-located brick-and-mortar" segments such as supermarkets and hypermarkets, mini-marts and convenience stores, and petrol service stations, he added.

On a seasonally adjusted monthly basis, retail sales were down 1 per cent in December, or down 1.4 per cent excluding motor vehicles.

Food and beverage services rang up S$964 million in sales in December, up 2.7 per cent year on year but down 0.6 per cent on a seasonally adjusted monthly basis.

Food caterers were the only segment to see sales fall, with a 2.8 per cent drop. Fast food outlets charted the biggest gains of 7.7 per cent. Sales rose 3.6 per cent for cafes, food courts and other eating places, and 2 per cent for restaurants.

Beyond retail sales, gross domestic product (GDP) growth is likely to take a hit from the virus outbreak. Ms Ling notes a risk of GDP contraction in the first quarter, adding that the key signal to watch is whether the official 2020 forecast is lowered from the current 0.5 to 2.5 per cent range. OCBC's forecast is 0 to 2 per cent "with a bias to the downside".

Mr Gan expects full-year growth to fall from UOB's estimated 1.5 per cent handle to between 0.5 and1 per cent, attributable to the virus.

[WASHINGTON] US business activity in both the manufacturing and services sectors stalled in February as companies...

[NEW YORK] US stock indexes opened lower on Friday, dragged down by technology stocks for a second day, as a spike...

ASPIAL said on Friday that its unit World Class Land (WCL) has been named a defendant in the winding-up proceedings...

[BEIRUT] The first case of the novel coronavirus in Lebanon was confirmed on Friday, the health minister said,...

CATALIST-LISTED property developer World Class Global made a net profit of S$13.6 million in 2019, down 41 per cent...