Angela Tanangelat@sph.com.sg
Spending on travel and tourism in Singapore over the past decade has grown at an average rate of 7.3 per cent to double to US$12.4 billion in 2016 - and the figure is poised to rally further in the next 10 years if the government succeeds in getting visitors to part with their money.
PHOTO: ST FILE

SPENDING on travel and tourism in Singapore over the past decade has grown at an average rate of 7.3 per cent to double to US$12.4 billion in 2016 - and the figure is poised to rally further in the next 10 years if the government succeeds in getting visitors to part with their money.

The World Travel & Tourism Council (WTTC), in a report examining the contribution of travel and tourism to city economies and job creation, predicts that it will happen - Singapore's revenues from tourism will grow by 3 per cent a year from 2017 to 2027 to US$18.1 billion by 2027 - that is, by 46 per cent in a decade.

Last year, the total contribution by the sector, including its indirect and multiplier effect on Singapore's gross domestic product (GDP), was US$28.7 billion, or 9.9 per cent of GDP.

The newly-minted president and chief executive officer of WTTC, Gloria Guevara, said: "The challenge is for the government to find ways to create more products, more unique experiences so that there's more spending."

Ms Guevara, a former tourism minister for Mexico, is in Singapore to launch the study Asia-Pacific City Travel & Tourism Impact. It covers 65 cities, 21 of which are in the Asia-Pacific.

The study noted that international visitors contributed to 68 per cent of tourism spending in Singapore, which is home to a major airport and a hub for Singapore Airlines.

"Many travellers have been encouraged to break their long-haul trip with a stay in Singapore," it said. 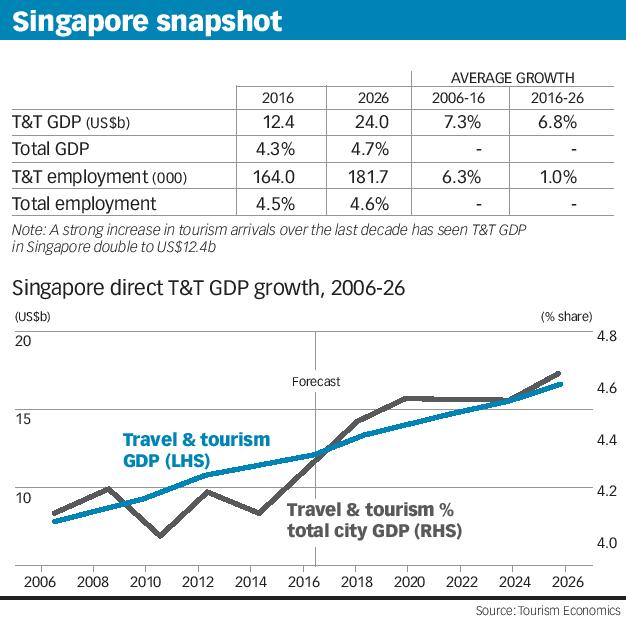 The Republic's travel and tourism sector relies on both leisure and business travellers; revenue from leisure travel is slightly higher, accounting for 55 per cent of all spending.

Last year, the sector directly employed 164,000 people - twice as many as in 2006 and more than in sectors such as banking and manufacturing, said the WTTC.

Ms Guevara said: "However, the diverse economy means that the importance of the tourism to overall GDP (gross domestic product) and employment is 4.5 per cent, and is expected to remain at a similar level over the coming years."

The private sector, too, has a role to play in boosting the sector by launching new products.

Ms Guevara said: "The question is: what is the average stay? Can that be increased? That's my question to governments.

"My main goal is to engage and work with governments to help them increase security, increase the number of travellers and create more jobs in a sustainable way."

The WTTC report, jointly produced with Oxford Economics, noted that the world's top 10 fastest-growing tourism cities are all in Asia.

"With the world average growth rate at 4 per cent per year and the Asia-Pacific at 5.8 per cent, these cities are significantly outpacing the regional and global average," she noted.

The Asia-Pacific also includes some of the world's largest travel and tourism cities. Shanghai, with an annual tourism GDP contribution of US$30 billion, is the largest in the world; it is followed by Beijing (US$27 billion). At US$20 billion, Tokyo is ranked sixth in the world.

Shanghai and Beijing together account for 21 per cent of China's travel and tourism economic impact (GDP), whereas Tokyo alone accounts for 18 per cent of Japan's total.

"The power of Asian cities when it comes to driving the travel and tourism sector is clear to see in this new data,'' Ms Guevara said.

"However, not only do these cities contribute significantly to their country's tourism sector, tourism is an important generator of economic growth and jobs within the cities themselves."

She stressed that the importance of investment in long-term planning, infrastructure and sustainable public policies cannot be underestimated.

"It is vital that city authorities understand the economic impact of travel and tourism, GDP and employment contribution, and not just visitor arrivals, as they seek to develop new products and opportunities to increase traveller spend and sustainable growth."

Globally, travel and tourism contributes US$7.6 trillion, or 10.2 per cent of global GDP, once all direct and multiplier impacts are taken into account.

[WASHINGTON] In selecting Janet Yellen to be the first woman to lead the US Treasury Department, President Joe Biden...

[HONG KONG] Hong Kong lifted a second neighbourhood lockdown in part of the densely-populated Kowloon area after the...

[NEW YORK] Starbucks reported a drop in quarterly profits Tuesday as it staged a partial recovery from the most...

[NEW YORK] The US dollar edged lower across the board as traders showed a preference for riskier currencies on...

[BENGALURU] Gold prices edged lower on Tuesday on concerns over a fresh US coronavirus aid package, while a slightly...

Netherlands has worst riots in four decades over Covid curbs