Check out the tiny hotel room culture in Osaka, where it all began
by
Peter Weld

There was a time when Japan's capsule hotels were for emergencies only: a place for drunken salarymen to grab a few hours of sleep before heading back to the office in the morning. The little fibreglass capsules were also the butt of foreigners' jokes ("That's not a hotel; it's a mortuary!"). As for foreign tourists, males would not have considered staying in one, and females, even if they had wanted to, simply weren't allowed in them.

But times have changed, and now for many overseas visitors to Japan, staying in a capsule hotel is near the top of their list of "must-have experiences", along with visiting a maid café and puttering around the streets in a Mario-style go-kart. Capsule hotels haven't just become socially acceptable; they're downright cool.

And where better to try a capsule hotel than in the city of their birth, Osaka? In the late 1970s, a spa called New Japan, in Osaka's Umeda district, had a problem: men were coming to the spa, soaking in its tubs, relaxing in its saunas . . . and falling asleep. The management felt it didn't look good to have so many people lying around and snoring. Couldn't New Japan build an area especially for sleeping, even if it offered each sleeper only a bit of space?

New Japan hired a well-known architect, Kisho Kurokawa, to design small fibreglass pods — just 90 cm wide, 75 cm high, and 190 cm long — which could be stacked one atop the other, and on Feb 1, 1979, a new, uniquely Japanese institution was born with the opening of Capsule Inn Osaka. The idea caught on, and soon capsule hotels had spread nationwide. 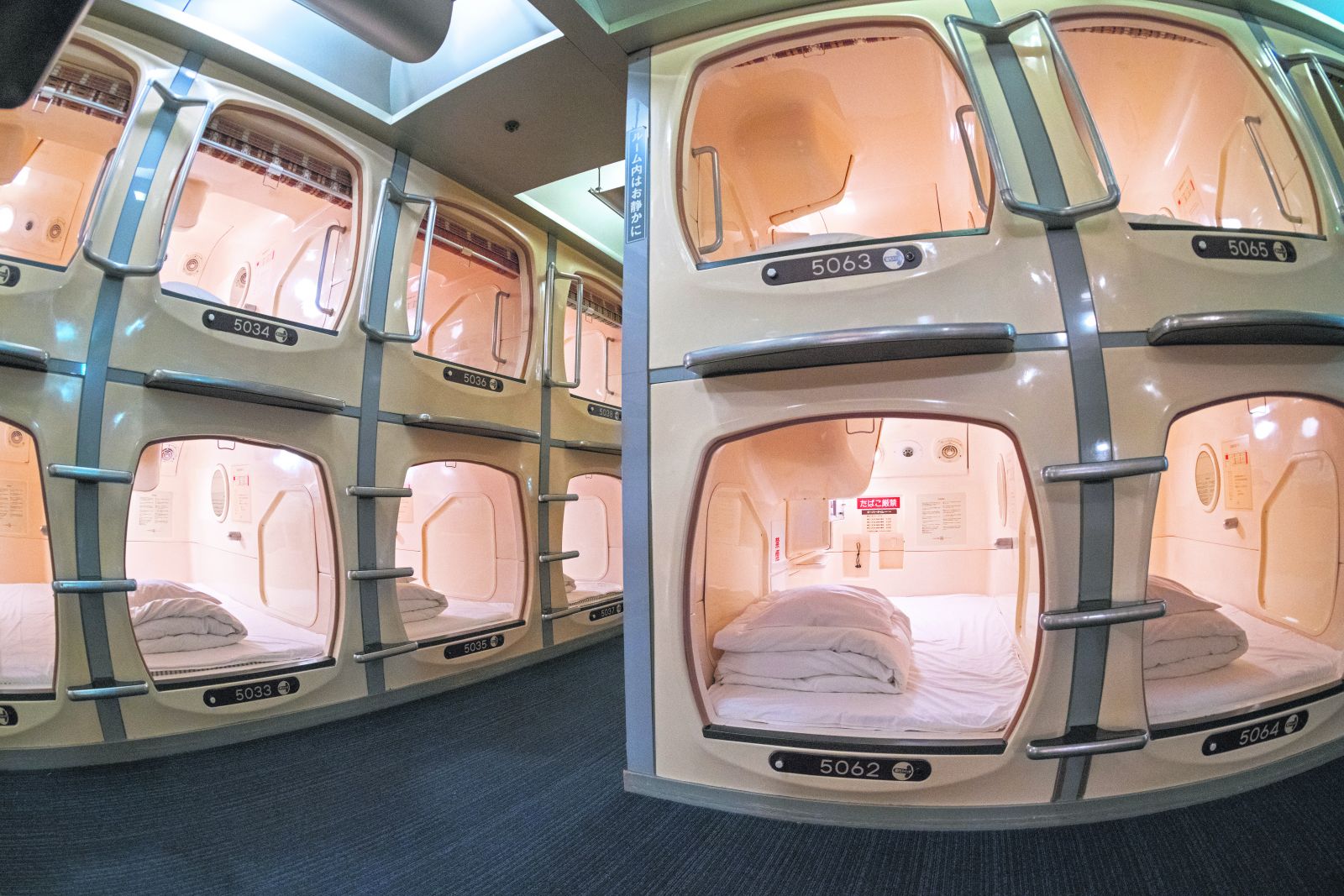 Capsule Inn Osaka is where it all began in 1979.

The granddaddy of them all, Capsule Inn Osaka, is still in business, but there's also a host of newer, hipper establishments from which to choose, such as Hotel J-Ship, which has taken the concept to the next level, with capsules that are wider, taller, and longer than those in Capsule Inn Osaka. Located just south of JR Namba Station, from the outside it could be mistaken for a parking structure, but inside it's tastefully appointed. There's one floor for women and two for men, all of them calm and quiet. 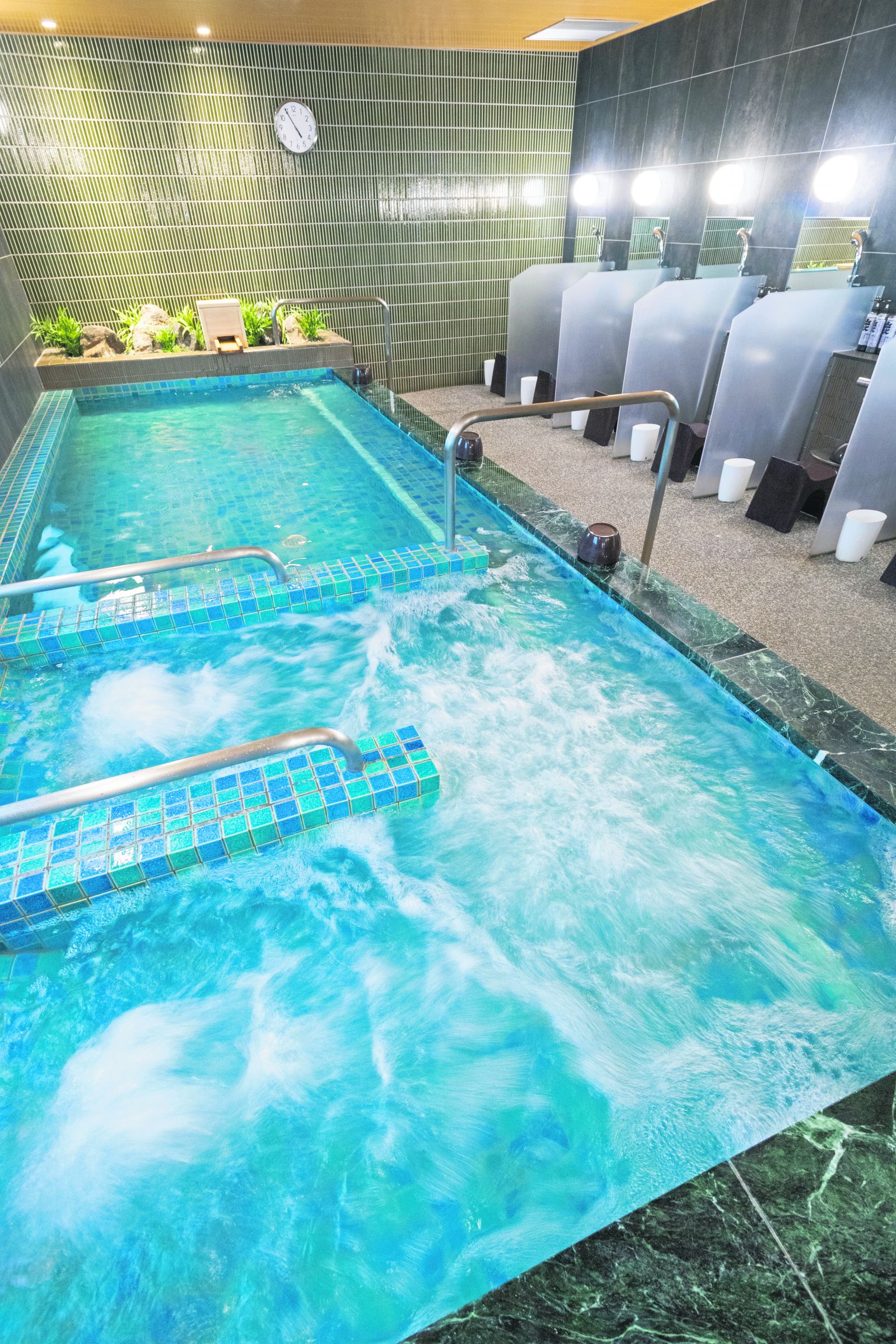 Hotel Cargo goes even farther. Like J-Ship, it features upper and lower levels of capsules on each floor, so there's not a lot of headroom, but each capsule is both wider and longer — roughly 5 sq m of floor space in all. The futon alone is 120 cm wide and long enough even for most basketball players, and you've still got enough space left over for some luggage.

A real rarity among capsule hotels, A-Style Shinsaibashi is for ladies only. It's popular with women who come to Osaka to see concerts: right outside the entrance is an elevator leading down to the Shinsaibashi subway station, from where every major concert venue is just a short ride away with no need to change trains. Another selling point is the wide variety of amenities available, including five types each of shampoo and conditioner. 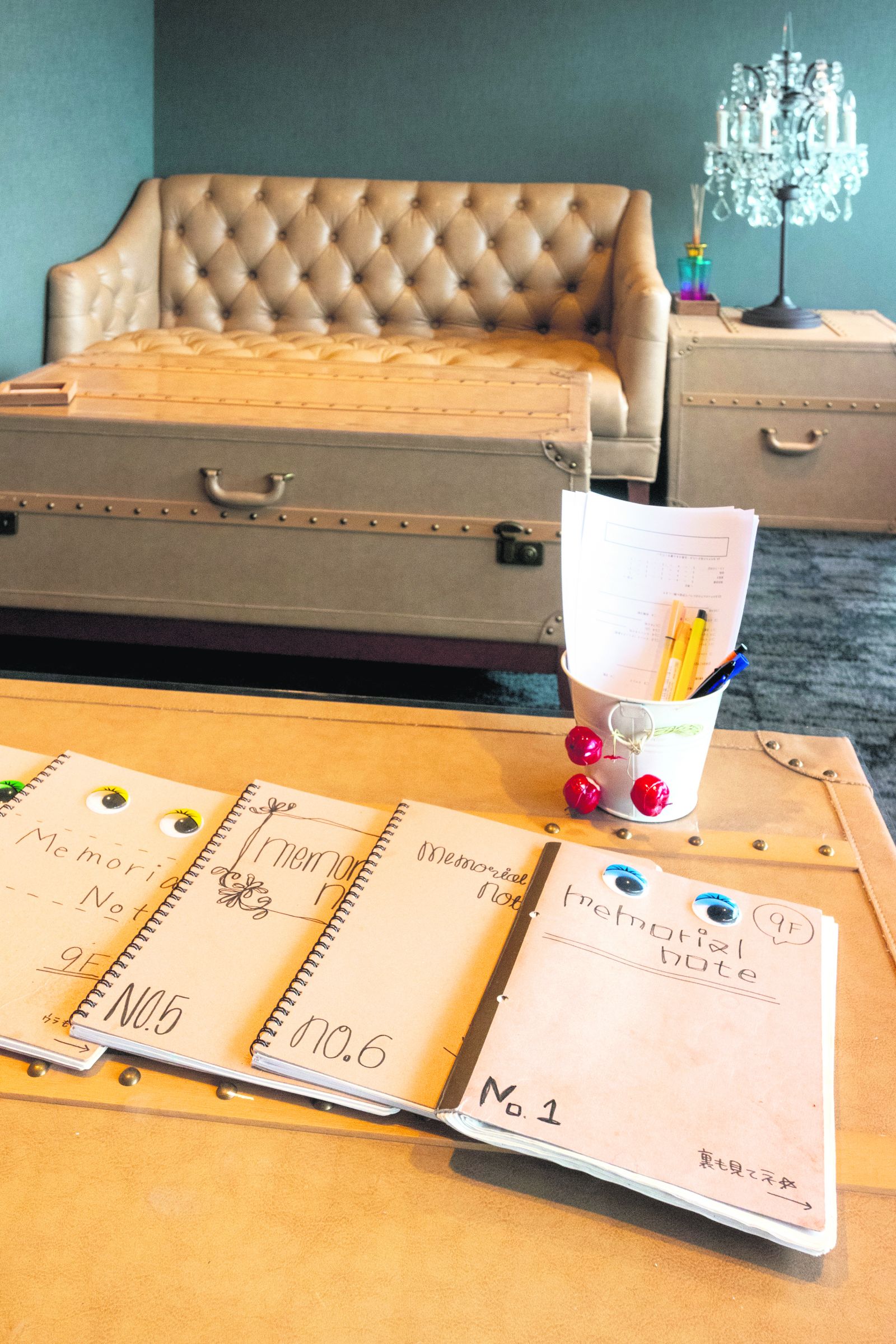 A-Style Shinsaibashi is for women only and features lots of feminine touches.

First Cabin's accommodations don't really deserve to be called "capsules": they're more reminiscent of the first-class suites on Singapore Airlines that you can stand up inside, which explains both the name "First Cabin" and the fact that the staff are dressed like flight attendants. The company has about two dozen locations, from Hokkaido in the north down to Kyushu in the south, but the Midosuji Namba location was the first, opened in 2009. It's just north of Hankyu Namba Station.

Tama Cabin is a hybrid: it too has cabins, but each includes one or two capsules (as well as a small closet and desk), so you can share a cabin with a travelling companion but still have your own private sleeping space. It's near Hommachi Station in the building formerly occupied by the offices of its parent company, Tama Home, a construction and remodeling firm. That may explain why the hotel's exterior is the most distinctive of the lot listed here.

Notable mainly for its place in history, Capsule Inn Osaka can be found a short walk east of Umeda Station. It's large, with over 400 capsules, and staying there gets you the use of New Japan's spa facilities as well. One of the original capsules, complete with a 40-year-old TV, can be yours for just ¥3,400 per night (¥3,800 on weekends), but note that the entire hotel is men-only and that tattoos are forbidden. 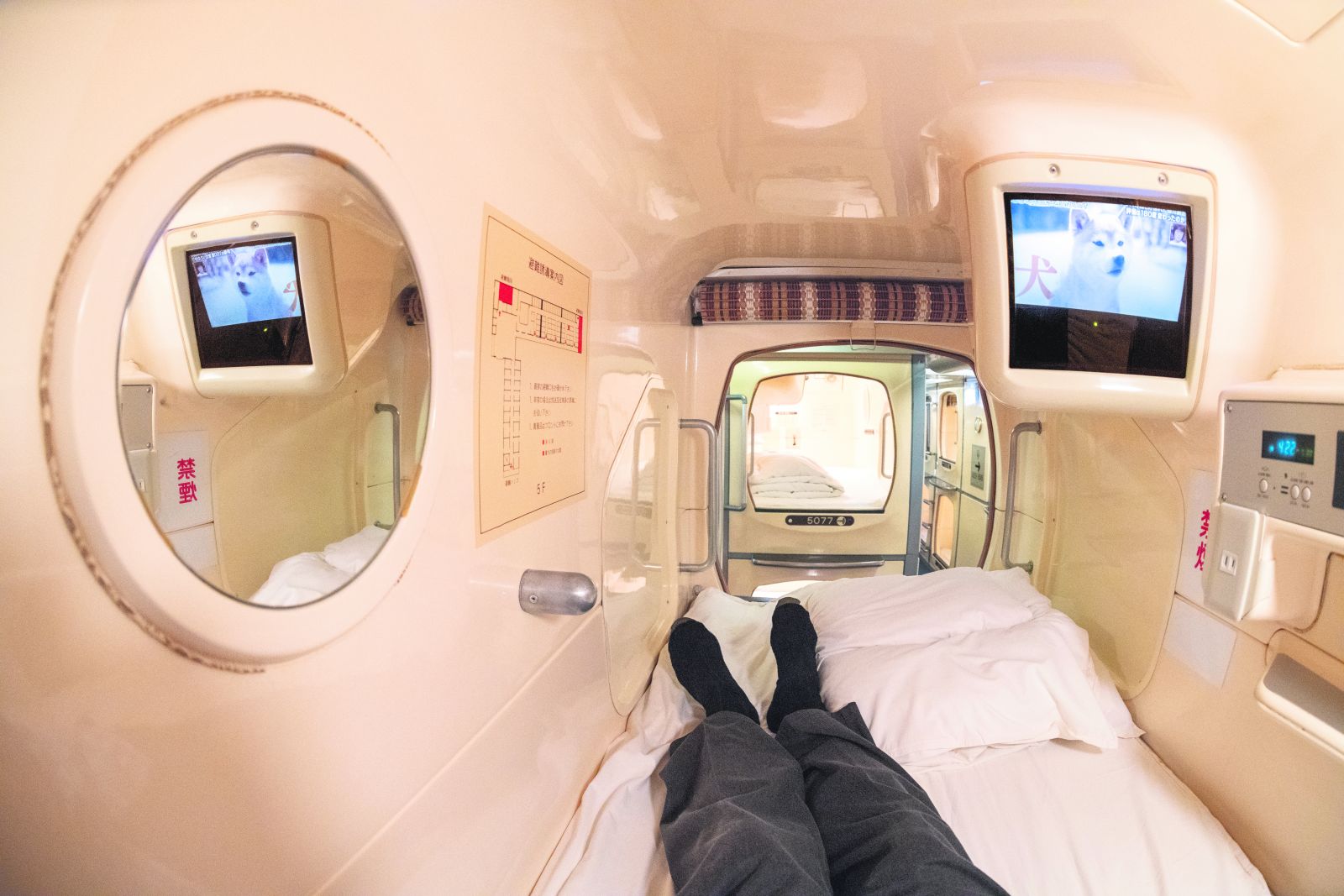 Most of the capsules at Capsule Inn Osaka look just like they did 41 years ago.

With the exception of Capsule Inn Osaka, rates vary from one night to the next, depending on the day of the week or time of year. But even at peak times, they're entirely affordable, and they provide a timely reminder that good things come in small packages.

Fly to Osaka in luxury and style

Singapore Airlines flies three times a day to Osaka, so you can travel at your convenience to enjoy the port city's myriad attractions from architecture to history and of course, its famous street food like okonomiyaki. Among the aircraft plying this route is SIA’s latest medium-haul A350-900, which boasts the luxurious new regional Business Class seats that offer comfortable flat-bed comfort.

Manufactured by Stelia Aerospace, each seat easily reclines directly into a 76-inch fully-flat bed, so you can enjoy a totally relaxing sleep even on the shortest flights. If you’d rather sit up and watch a movie, stretch out in a seat that measures up to 26 inches in width with retractable armrests that can be raised or lowered.

Plenty of stowage space is a given, and catching up on work is a breeze with in-seat power supply, USB ports, integrated reading light and a personal 17-inch full high-definition touchscreen monitor.

Otherwise, check out SIA's myKrisWorld, with its selection of more than 1,800 movies, TV shows, audio programmes and games.

Watch your favourite shows as you indulge in gourmet cuisine from SIA's Book the Cook service. Before you know it, you'll be rested, refuelled and ready to enjoy the sights and sounds of Osaka.