New digital F&B concepts are opening despite – or because of – the pandemic crisis
by
Jaime Eejaime@sph.com.sg@JaimeEeBT

What's the difference between a virtual restaurant and one that's simply pivoted to offer delivery options?

The answer is Grammi, a new Italian- Mediterranean ‘restaurant' that will have no physical dining room but is geared purely towards home delivery, with a menu of over 40 wholesome food choices that are either readyto- eat or ready-to-cook.

It's a sign of the times as the Covid-19 crisis makes working from home and social distancing the new normal even when circuit breaker measures lift, says Beppe De Vito of the ilLido group, who is launching Grammi on June 8.

Virtual restaurants are being touted as a cost-effective solution in an F&B industry where the largest chunk of expenses go towards rental and manpower. Also known as ‘ghost' restaurants, they have no shopfront and work out of a rented kitchen space or a shared kitchen with a regular full-service restaurant. Without having to pay for a premium location, renovations or serving staff, "you can start with a high five-figure investment compared to a minimum S$500,000 for a brick-and-mortar restaurant," says Mr De Vito.

Virtual restaurants have been a growing trend internationally but the pandemic "has definitely given it a big push," he adds. Currently, Grammi will operate from the kitchen of Art, Mr De Vito's flagship restaurant at the National Gallery which he decided to close during the Circuit Breaker period rather than offer takeaway or delivery.

If the concept takes off and Art is allowed to re-open, the plan is to move Grammi off-site. "We're hoping for it to become a permanent business and eventually it will operate out of a main kitchen or ‘ghost' kitchen." Since his staff would go back to running Art, "we'll need to employ more people on top of the costs already incurred for design, branding, marketing and packaging." He has also applied for a Virtual Brand grant from the government.

The menu is completely different from what Art would serve, and focuses on healthy-ish starters and mains such as octopus salad, creamy mushroom soup, baked penne or Angus beef cheek stew. A pantry section will be a boon to home cooks who can assemble quick proper meals from a variety of homemade pastas, sauces, cheeses and cured meats. As the F&B industry continues to struggle, Grammi is one potentially long term proposition that could help push his restaurant group out of the pandemic doldrums, says Mr De Vito. He's seeing some promise on the delivery front, with steady business generated by his casual Italian eatery Amò in Hong Kong Street, but it's still not good enough.

"Food sales have reached about 80 per cent of what it would usually be, but we've also been giving discounts and incurring extra costs with delivery commissions, packaging and marketing. And with beverage sales close to non-existent, we're really only generating half the revenue we used to do."

On top of this, while waiting for the government's green light to reopen restaurants for dining in (it could happen as early as the end of June), the one Michelin-starred Braci has just launched Braci a Casa, its new home delivery service. Both a la carte and tasting menus are offered, with highlights such as tagliolini with scampi and uni sauce, pappardelle with asparagus and truffles. 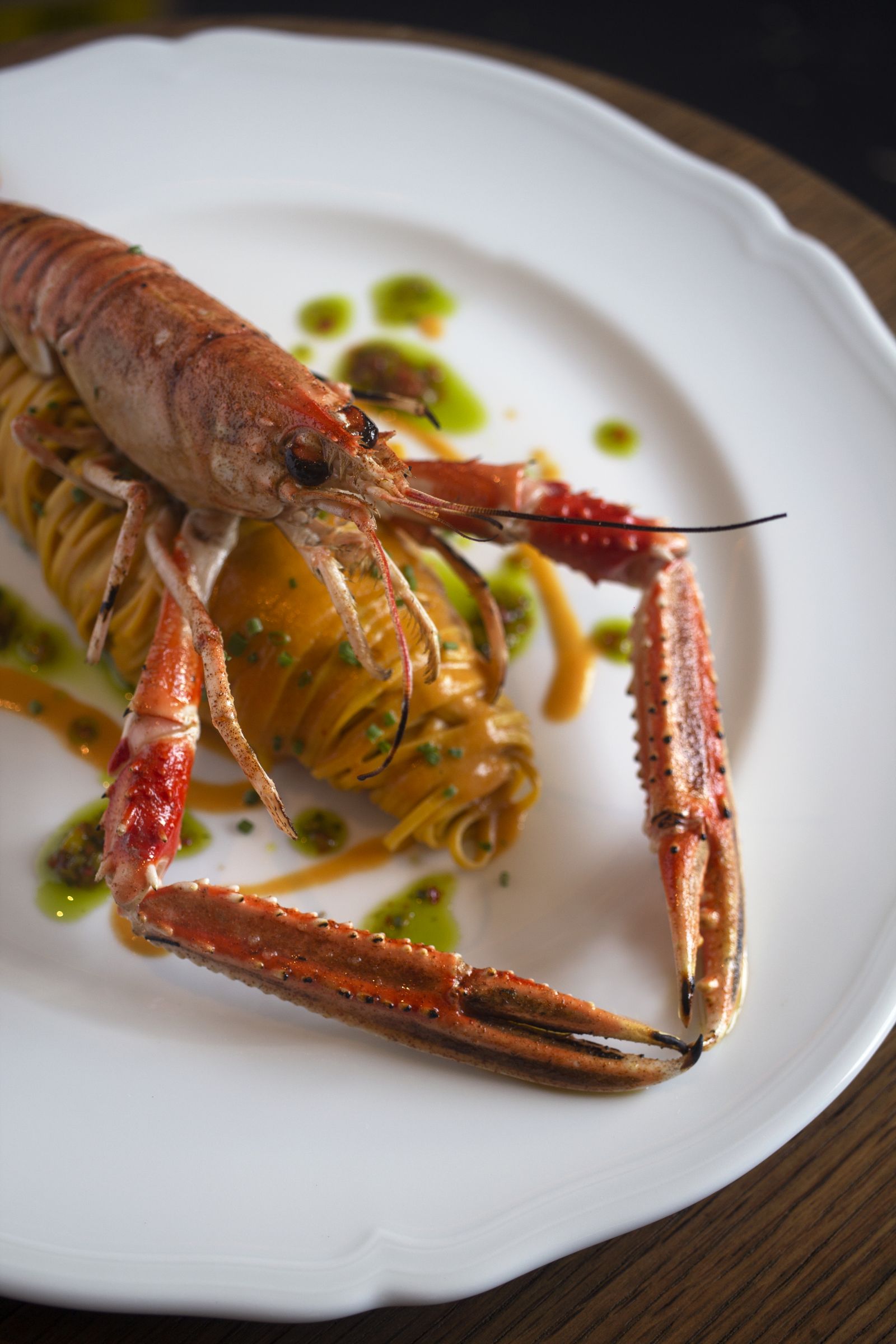 Tagliolini, scampi and sea urchin at Braci a Casa

Government support has been a big help, with wage support and laws to guarantee rental rebates, but "we can expect more casualties big and small before this is over," says Mr De Vito, who was one of the driving forces behind the #savefnbsg group which first lobbied for more government help to save businesses. Still, he's looking forward to reopening for dine in, "because we F&B people are famous for our delusional optimism that things will all go back to normal eventually."

You can take the chef out of the hawker centre but you can't take the hawker centre out of the chef. It's something you might say about Han Li Guang who made his name with the one Michelin-starred mod-Sin Labyrinth but is now going back to the food of his childhood with his newest F&B creation, Miss Vanda. Originally meant to be a brick-and-mortar outfit, Covid-19 put his tribute to local hawker food on hold, but with Labyrinth in limbo due to circuit breaker measures, Chef Han decided to launch Miss Vanda as a virtual restaurant of sorts. Operating out of Labyrinth's kitchen, Miss Vanda opened on June 2 with a lineup of hawker-style favourites from har cheong (prawn paste) chicken wings and sambal stingray, to laksa and wagyu beef rendang.

Miss Vanda opened for pre-orders on May 30 and the response has been phenomenal with 150 orders chalked up just for June 2 itself.

As anyone may have guessed, Miss Vanda is a play on Singapore's national orchid, "which represents local heritage, flavours and produce," says the locavore chef whose main menu at Labyrinth is almost completely locally sourced. Miss Vanda, on the other hand, "is not as locally-driven as Labyrinth but we source locally as much as we can," he adds.

"Vanda's value proposition is to offer a high and consistent standard of local dishes across the board with quality produce."

The recipes are derived from Chef Han's own childhood or hawker fare that he grew up eating, such as laksa, which is priced at $28 in his menu but which is amped up with premium ingredients such as grilled Argentine red prawn and local green lip mussels. As for why people would want to pay such a premium compared to, say, a S$5 bowl at the hawker centre, Chef Han says it boils down to the right cooking process – "the hawker laksa these days is quite diluted" – and quality ingredients.

His signature dish is inspired by local chicken rice, but done in his Hainanese grandmother's style, incorporating a rich, roux-based chicken and mushroom gravy from her days as a housekeeper cooking for a British family. 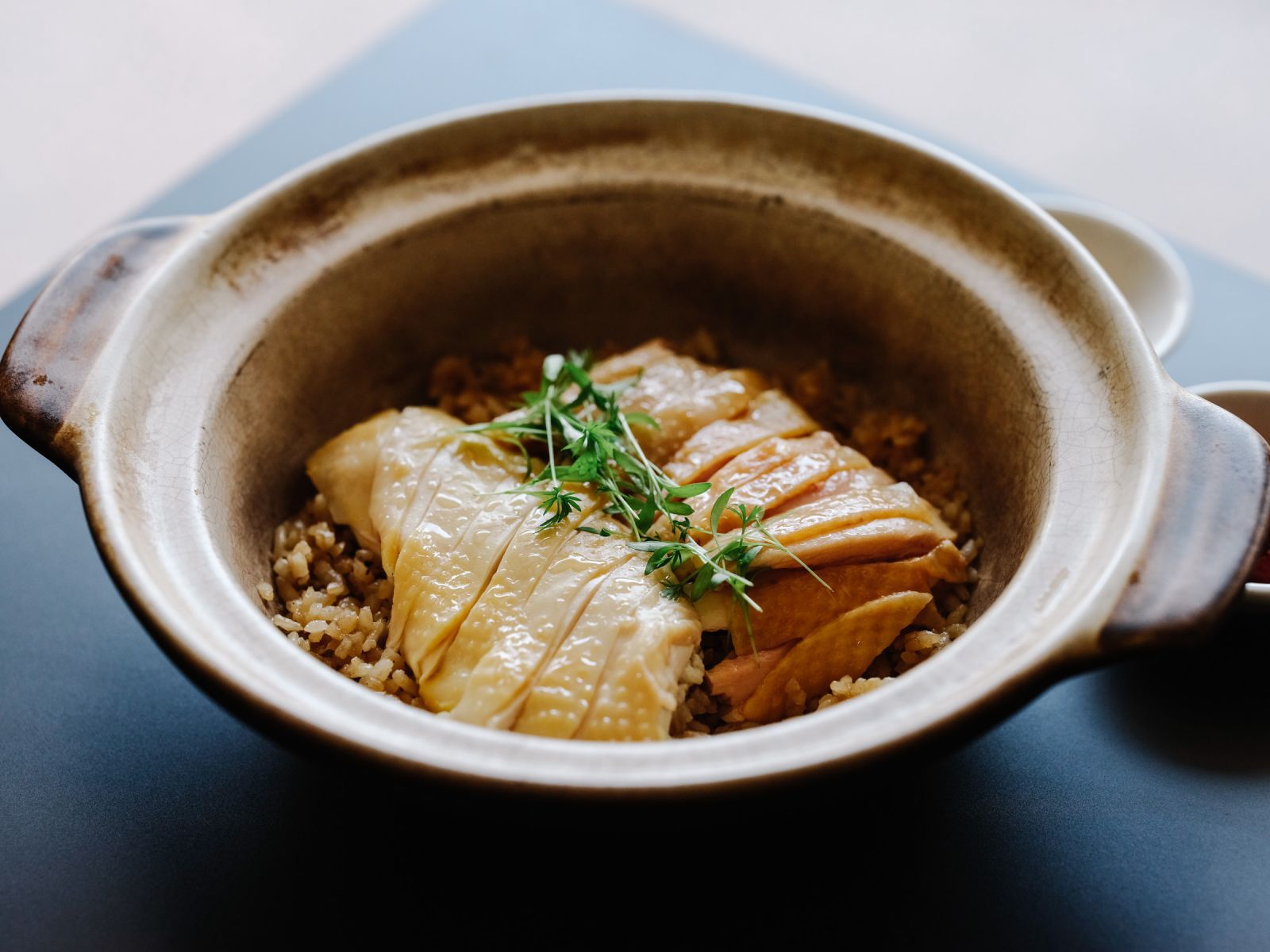 Of course, the dishes have Labyrinth touches, such as his dragonfruit and pineapple char siew Kurobuta baby back ribs, deepfried local quail with togarashi and curry mayonnaise, and an intriguing dessert of bo lo pau filled with char siew diplomat cream.

The long term plan is still to open a physical space for Miss Vanda, but if the business takes off, Chef Han may consider delaying Labyrinth's reopening when the government allows dining in again. Taking a leaf from Noma's book – the famed Copenhagen restaurant has reopened as a cafe serving burgers – he might bring Miss Vanda in-house until the time is right to revive the Michelinstarred menu again.

But for now, instead of tasting the future of Singaporean cuisine at Labyrinth, Miss Vanda will take you on a tour of its culinary past but with Chef Han's signature twist.

To order, go to missvanda.sg

In the early stages of Covid-19 before Circuit Breaker came into effect, Roberto Galetti of the one Michelin-starred Garibaldi and his management team began to brainstorm contingency plans should things get worse, which they invariably did.

Going online fast was inevitable and besides just offering a delivery service for Garibaldi's cuisine, they wanted to launch a concept that, if well executed, could also grow into a new business as well.

That was how Burrata Joy came about – with a delivery menu built around the fresh Italian cheese that was always one of the most popular items in Garibaldi's menu. It specialises in burrata bowls, matched with everything from smoked salmon to pasta and even truffles. There's even a selection of pasta dishes, breads and soups to complete the menu.

"We originally wanted to work with a supplier based in Italy but because of the international lockdowns, we had to change our strategy," says Chef Galetti. "We decided to collaborate with an Italian friend who produces cheese in Singapore using ingredients imported from Italy, including cows' milk and salt harvested from the Trapani Salt pans in Sicily." 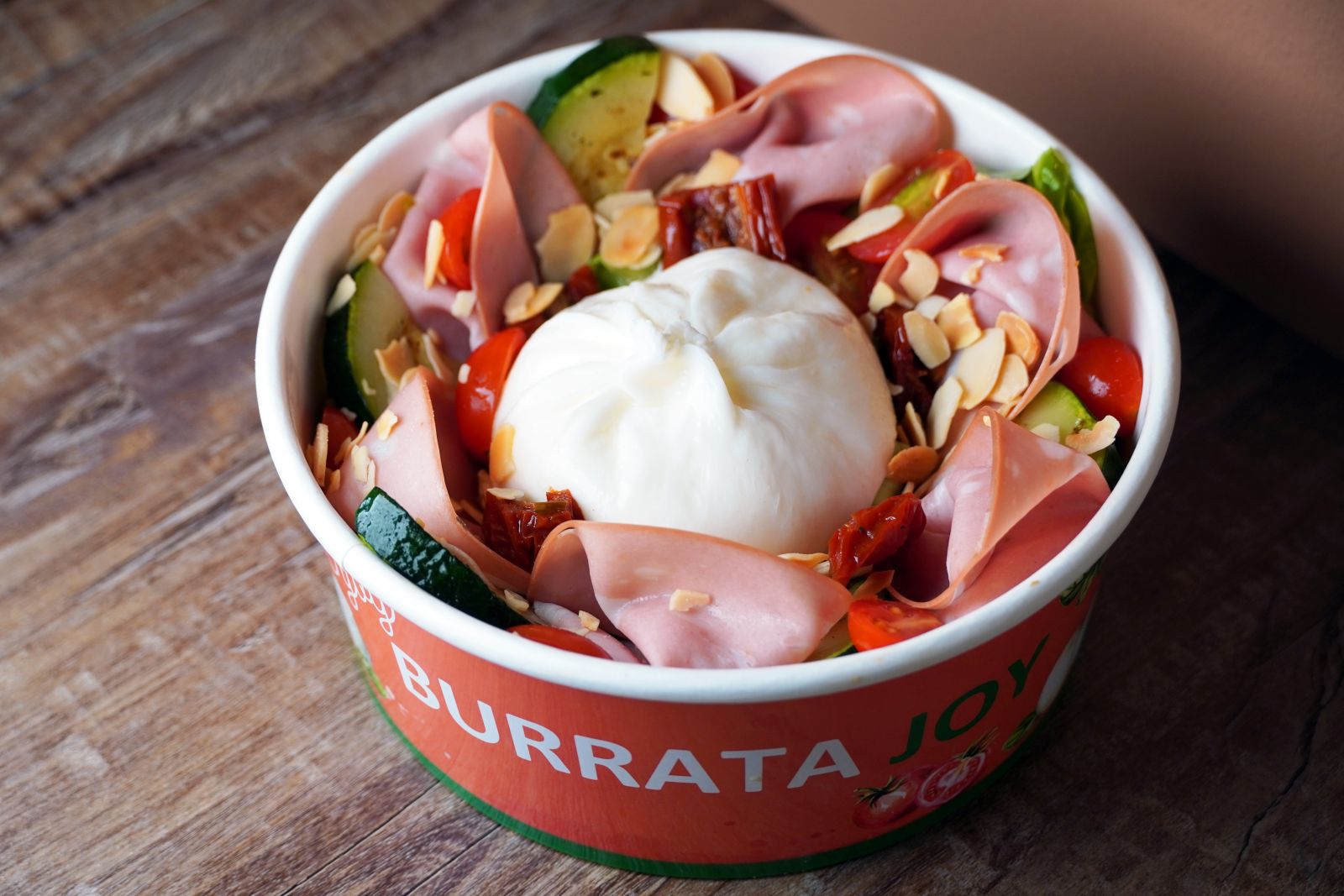 Besides its signature burrata bowls, the cheese is also sold on a retail basis, packed in individual containers.

Currently, Burrata Joy operates out of Garibaldi's kitchens so that they can keep things under control and manage customer feedback. If the business takes off, it might partner with Deliveroo to open a central kitchen. But the focus will be online, with no plans for a physical space. "We want to focus on the ambience and service of Garibaldi," says Chef Galetti. But if burrata becomes the next food trend, he might well change his mind.

To order, go to burratajoy.com

So it's official. Esora, the quietly luxurious Japanese modern kaiseki restaurant which closed unexpectedly last year, is set to reopen its Mohamed Sultan premises once dining in is finally allowed in Singapore.

But in anticipation of its reopening, head chef Shigeru Koizumi will whet your appetite with a takeaway menu launched on June 5 that's focused on katsu sandwiches.

"In Japan, there is a culture of eating foods that have the word "win" in their name, especially for important occasions such as when taking a college entrance exam or competing in the Olympics," says Chef Koizumi. "The word ‘katsu' which refers to deep-fried meat cutlets served Japanesestyle, also means ‘winning' in Japanese. For this reason, my mother also prepared these homemade katsu sandwiches for me to take to Sports Day at school every year. These sandwiches are my expression of hope that we can all overcome the effects of this pandemic and emerge stronger together. "

He adds that even when Esora was open, "I'd always toyed with the idea of a katsucentric project, but unfortunately, the stars never aligned." So the time is right now for the restaurant's fans to get a taste of what he's always wanted to do since he was a kid. Plus, "This limited-time takeaway concept will offer a taste of my cooking philosophy without the grandeur of dining in."

To order, go to restaurant-esora.com

For chef hobbyist Karen Teng, an old bak chang recipe created by her late maternal grandfather became her ticket to a small online business when she launched Flourice – a portmanteau of flour and rice – to sell an unlikely combination of rice dumplings and Basque burnt cheesecake.

Meant to encompass both her interests – baking and cooking – she started out making her two specialities to share with her neighbours during the Circuit Breaker period, but they became so popular that she decided to do it full time.

There's a heritage angle to her dumplings. Her grandfather Tan Mum Chee used to run the traditional Hup Hoe Biscuit when it was in Telok Ayer in the 1940s. In 1965, he created a recipe for bak chang that became so popular that Hup Hoe became famous for it for almost 30 years until Mr Tan's passing in 1991. A few months later, the shop was razed to the ground by a fire and the dumplings were never sold again.

Until now, thanks to Ms Teng, who has lovingly recreated the original dumplings that are chewy and plump to the bite, stuffed with braised pork, mushrooms, chestnuts, dried shrimp, salted egg yolks and more. It tastes oldfashioned which is a big part of its appeal. 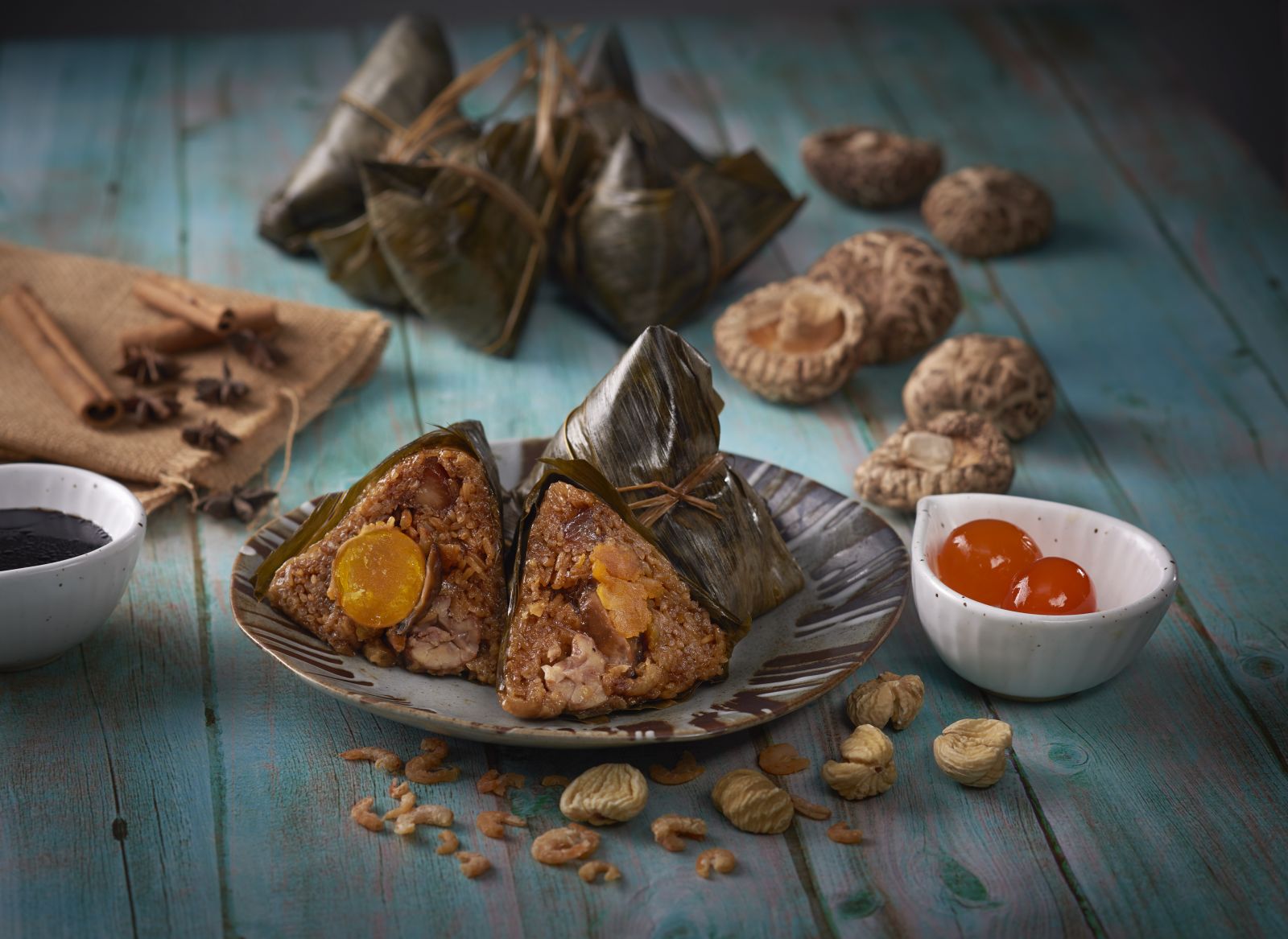 At the same time, Ms Teng also marries Mao Shang Wan durian with Basque burnt cheesecake for an uber-rich confection that's best eaten frozen for its ice cream-like texture. It features a cookie crumb-base, creamy custardy cream cheese filling with the discernible fragrance and flesh of durian. There's also a regular version without the durian that boasts a jiggly, melty centre made from two kinds of cheese. It may not be the healthiest, but this sounds like a great meal and dessert combination.