THE Covid-19 outbreak and economic slowdown have started to bite; the Urban Redevelopment Authority's flash estimates for the first quarter shows its benchmark overall private home price index shrank 1.2 per cent over the previous quarter.

The drop followed three consecutive quarter-on-quarter gains. Year on year, the index is up 2.2 per cent. 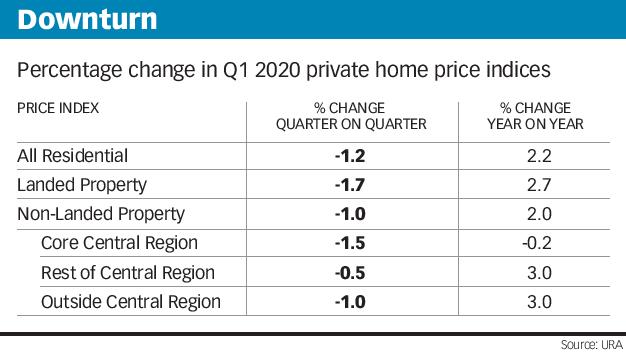 Analysts expect private home prices to continue heading south, to the tune of up to 8 per cent for the whole year. However, they are not predicting a steep fall like the 24.9 per cent slide over four quarters during the Global Financial Crisis.

Successive rounds of property cooling measures over the past decade have built up systemic prudence and prevented an asset bubble from forming.

"The URA private home price index has risen only 9.1 per cent from end-2010 to Q1 2020; so prices have not run ahead of fundamentals, thus lowering the risks for homeowners," said JLL's senior director of research and consultancy Ong Teck Hui.

Analysts expect developers to sell about 20 to 30 per cent fewer private homes this year than the 9,912 units they moved last year - amid weaker sentiment and restrictions on showflats given tighter social-distancing measures aimed at slowing the further spread of the coronavirus outbreak.

PropNex Realty chief executive Ismail Gafoor said: "Developers are still going ahead with launching new projects but they are adjusting their price expectations. In today's normal, if a developer can sell 10 per cent of a project with more than 300 units during the first weekend of its sales launch, he should be very happy and work on the momentum." Pre-Covid, the norm was to move 30 per cent or more of the project in the first weekend.

DBS Group Research analyst Derek Tan too expects developers to try to continue launching their projects due to the five-year deadline to finish selling all units, from the site purchase. "At the same time, they will continue to lobby the government to relax the cooling measures."

Savills Singapore executive director Alan Cheong suggests that "if market sentiments are stretched, some developers may either defer their launch for a quarter or two or they could launch in accordance to plan but do so in small batches to test the waters".

At the low end, Colliers International's Singapore research head Tricia Song predicts a decrease of one to 3 per cent. At the other end of the range, CBRE's Southeast Asia research head Desmond Sim and Savills' Mr Cheong say the index may shed 5 to 8 per cent.

The Singapore government has projected GDP to decline by one to 4 per cent this year. "Moving forward, we expect developers to be more flexible in their pricing expectations in reaction to the Covid-19 outbreak, especially when they have to factor in the limitations at showflats due to enhanced social-distancing measures," said Mr Sim.

The outlook for the Singapore property market has changed drastically in the past few months. Prior to the Covid-19 outbreak, DBS' Mr Tan was looking at an increase of up to 2 per cent in URA's private home price index this year; he has since reversed his forecast to a drop of up to 3 per cent instead.

Mr Cheong of Savills paints two scenarios ahead for the private housing market. In the first scenario, where buying sentiment is just moderately stretched with fear over Covid-19 managed well here, "if visibility of the pandemic clearing up appears towards end-2020 or early next year, the property market rebound will be quick and will cover the lost ground".

"In the second scenario, where there is a total breakdown of economic and social behaviour arising from the twists and turns of the Covid episode, the fabric of market sentiments may tear. Then no matter how much developers slash prices, demand will be anaemic or negligible. In that case, I am sure there will be intervention by the authorities and banks to alleviate the situation. Developers will then defer till the appropriate time to launch."

For now, most market watchers think it would be premature for the authorities to grant developers their long-standing wish of rolling back cooling measures.

Giving a positive take on the situation, Nicholas Mak, head of research and consultancy at ERA Realty, said: "Once the pandemic has been contained, there will likely be robust recovery in demand and prices due to the pent-up demand and fuelled by loose monetary policies. Housing demand might be postponed - but not destroyed - by Covid-19."

Property agencies are exploring ways to use technology to market real estate to enable foreign buyers to view and buy despite the travel restrictions, he added.

For the first quarter of this year, within the non-landed private housing segment, the prime areas or core central region (CCR) posted the biggest q-o-q decline of 1.5 per cent, although this was a smaller drop than the 2.8 per cent slide in Q4 2019.

Property consultants generally attribute this to the pricing for The M along Middle Road, with 389 units sold at a median price of S$2,439 psf in the first quarter. JLL's Mr Ong said this was "less aggressive pricing" compared with new sale transactions in the CCR in Q4 2019.

In the city-fringe or rest of central region (RCR), non-landed private home prices shed 0.5 per cent after dropping 1.3 per cent in the previous quarter. "Without major new launches leading prices in RCR, the index continued to soften in Q1," said Mr Ong.

In the suburbs or outside central region (OCR), prices fell one per cent, contrasting with the increase of 2.8 per cent in the previous quarter. "In the fourth quarter of last year, Sengkang Grand Residences was launched, selling 226 units at a robust median price of S$1,742 psf whereas top-selling projects in Q1 2020 such as Treasure at Tampines, Parc Clematis and Parc Botannia had median prices below S$1,600 psf," said Mr Ong.

URA's flash estimate data also showed that prices of landed properties fell 1.7 per cent in Q1 this year, after rising 3.6 per cent in the previous quarter.

[SYDNEY] A Singapore-flagged cargo ship lost at least 40 containers in deep waters off the coast of Sydney when they...

[KARLSRUHE] A German federal court judge ruled that Volkswagen has to pay compensation to motorists who purchased...