THE latest batched government tender closings of three 99-year leasehold residential sites on Wednesday saw developers flocking to the sites at Cuscaden Road and Mattar Road, and setting a new high in land rate for the prime Cuscaden Road site.

But the large site in Silat Avenue pulled in only one developer.

This translates to S$$2,377 per square foot per plot ratio (psf ppr), trumping eight other bidders for the site.

The sum not only smashes the record for a residential government land sale (GLS) site, it also surpasses earlier market expectations of between S$1,800 and S$2,300 psf ppr, said Tricia Song, head of research for Singapore at Colliers International.

Explaining his optimism, SC Global Developments chairman and chief executive Simon Cheong noted that it is has been more than a decade since a residential GLS site became available for sale along Orchard Road.

"Surrounded by Singapore's finest hotels with The Regent Hotel in front, St Regis around the corner and Four Seasons to the side, this highly sought-after address presents a wonderful opportunity to create a distinctive new collectible," he said. 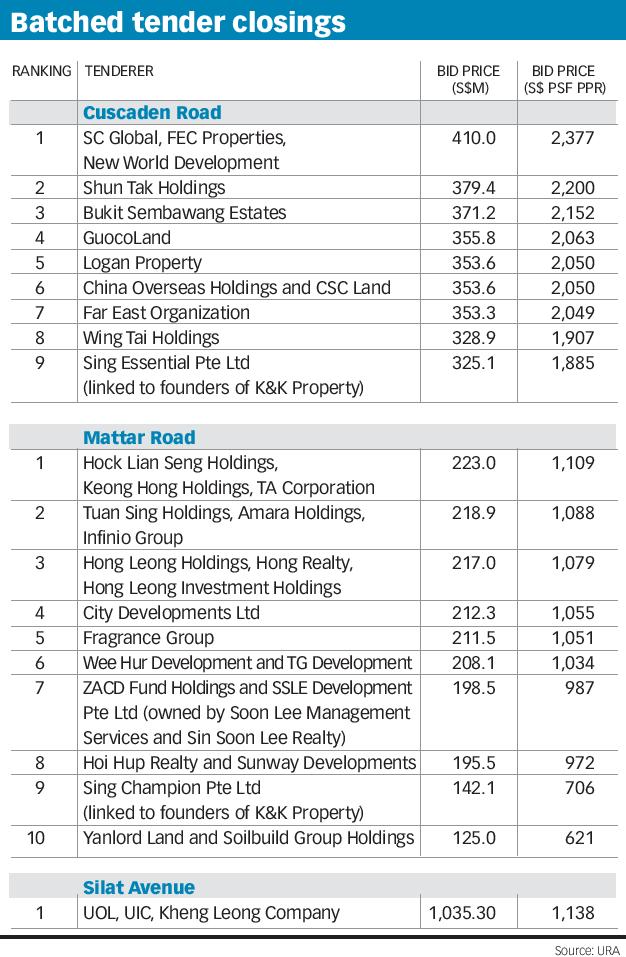 Ms Song noted that her forecast range of S$3,500 to S$3,700 psf is achievable, given that nearby freehold luxury new launches such New Futura and Ardmore Le Nouvel have achieved average prices of S$3,200 to S$4,000 psf; the 99-year leasehold Wallich Residence in Tanjong Pagar has sold some units at S$3,700 psf.

ZACD executive director Nicholas Mak said that the fact that all nine bids for the Cuscaden Road site are above S$2,000 psf ppr "will give a shot in the arm for the land-sale market, especially the en bloc sale market".

Over at the Mattar Road site, there were 10 hotly contested bids.

Huttons Asia research head Lee Sze Teck noted that the bids of the top five bidders varied by only 5 per cent, and that the fierce competition stemmed from there being limited residential land available beside Mattar MRT station and within proximity of the commercial cluster at Paya Lebar.

"The successful bidder can ride on the remaking of Kampong Bugis which the government recently announced; a master developer is likely to be appointed in the next one to two years," he said.

Mr Mak estimated the breakeven price for the Mattar Road site to be between S$1,700 and S$1,800 psf.

"With such keen demand for sites, the en bloc market is likely to stay firm as it continues to be the main source of residential land supply over GLS," he added.

Mr Ong said the muted demand could be due to the large capital outlay and constraints posed by the presence of five conserved buildings, which are to be retained and restored.

Another condition is that the number of dwelling units on the site is capped at 1,125 units.

The tender condition for the Silat Avenue site also requires the use of prefabricated, pre-finished volumetric construction (PPVC), which could have put developers off.

But this complexity has not deterred UOL, which is already developing a 40-storey condominium in Clementi called The Clement Canopy using this method of construction.

UOL deputy group CEO Liam Wee Sin said the consortium was drawn to the inner-city location and low supply in the vicinity of the Silat Avenue site, which would be a draw for investors looking for an inner-city location to live in or for rental income.

"Our proposed development will likely comprise two 56-storey residential towers and five conserved buildings, which we will convert into one-bedroom apartments and common facilities," he added.

[SINGAPORE] Singapore will hold its first business conference of scale this week since the coronavirus pandemic put...

[WASHINGTON] Vice-President Mike Pence's chief of staff, Marc Short, has tested positive for coronavirus along with...

Japan's ANA to cut 3,500 jobs in three years due to virus woes

[TOKYO] ANA Holdings plans to cut about 3,500 jobs in three years as Japan's largest airline operator braces for its...