AMBER PARK, a 200-unit development at Katong, has been sold via a collective sale to a joint venture between a City Developments (CDL) subsidiary and Hong Realty, the private real estate arm of Hong Leong Group.

With it, the total transaction value of en bloc deals also crossed the S$5 billion mark, compared to just S$1 billion for the whole of 2016.

The buyers, Cityzens Development and Hong Realty, beat seven others to clinch the plot. They will respectively hold a 80:20 stake in the project.

This is the fourth en bloc attempt by the property, which was originally built by CDL. Its last collective sale tender in June 2015 had closed with no bids.

The sale price of S$906.7 million reflects a land rate of about S$1,515 per square foot (psf) per plot ratio, based on the allowable gross plot ratio of 2.8. Owners can expect to receive gross sale proceeds of between S$4.3 million and S$8.3 million. 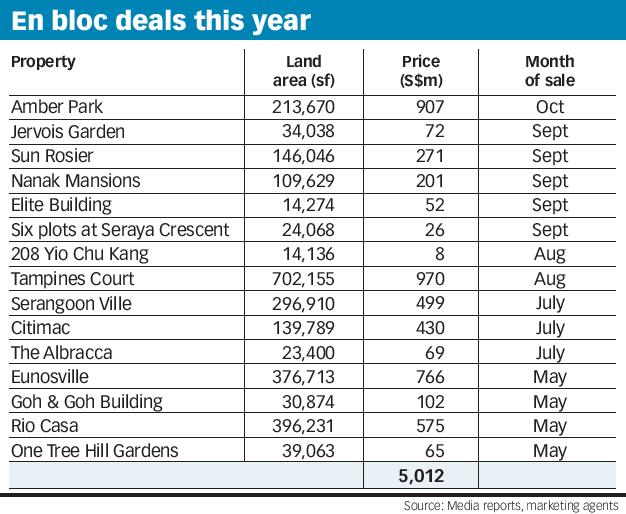 A CDL spokesman explained the developers' optimism: "After several years of subdued market conditions and macro-economic headwinds, the Singapore property market is seeing improved sentiment and increased activity. The private residential property price index for Q3 2017 showed its first rebound in 15 quarters (or four years). This could signal a budding recovery which CDL is well poised to benefit from."

On the site specifically, the spokesman added: "It is located in the established and well sought-after Katong and East Coast area that is in the beginning stages of transformation and gentrification; there is the upcoming Thomson-East Coast Line, and rejuvenation of East Coast Park. We expect healthy demand for the new project at the Amber Park site given its excellent locational attributes and rare freehold status."

Analysts found CDL's offer price to be bullish, at an 18 per cent premium over its reserve price of S$768 million.

He added that this was one of the last sites of such size in the popular Amber Road location, which is near the upcoming Tanjong Katong MRT station. He said that the management team probably gained confidence because it understands the area well, and was in fact the original developer of Amber Park three decades ago, in 1986.

Another analyst noted that CDL's purchase price would translate to a breakeven price of about S$2,200 psf and selling prices of S$2,600 to S$2,700 psf.

This is above transaction prices of around S$1,900 to S$2,000 psf at the nearby Amber Skye and Marine Blue. 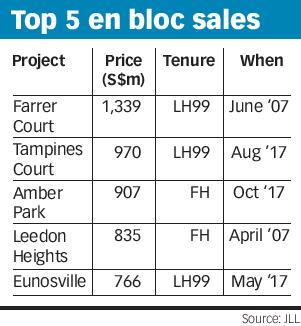 Perhaps reflecting this, CDL's share price failed to rise with the acquisition news, slipping two cents to end at S$11.42 on the stock market.

Under the 2014 Master Plan, the 213,670 sq ft site is zoned residential with a gross plot ratio of 2.8. This means that it can be built to an allowable gross floor area of about 598,290 sq ft. Development charges are not payable for the proposed redevelopment.

Tan Hong Boon, regional director at JLL, which marketed the property, said: "There are not many sites of similar size that are available for redevelopment in the Amber Road location, as most of the larger projects have been sold en bloc and redeveloped over the years. Amber Park could possibly be one of the last collective sale sites with a land area above 200,000 sq ft in this precinct."

In a statement, CDL said: "Subject to approval, CDL and Hong Realty plan to redevelop the site into a luxury condominium development comprising four 25-storey blocks with close to 800 units and a basement carpark. Most apartments will have a north-south facing orientation with many units commanding sea views."

Sherman Kwek, who became CEO-designate of CDL in August this year following CEO Grant Kelley's resignation, added that the site's freehold status is "a distinct advantage" because this is "something that is increasingly rare in Singapore".

The area is known for its rich heritage and dining options. It is also near amenities such as Parkway Parade and I12 Katong shopping centres, and schools such as Tanjong Katong Primary School, CHIJ (Katong) Primary and Tao Nan School.

The established private residential enclave is also a short walk to East Coast Park, and within a 15-minute drive to the central business district and Changi Airport by the East Coast Parkway expressway. Some 200m from the site, the Tanjong Katong MRT station is also expected to be completed in 2023.

[SYDNEY] The Australian and New Zealand dollars gained on the euro on Wednesday as the risk of lockdowns in Europe...

THE planned air travel bubble between Singapore and Hong Kong may start next month, the Republic's Minister for...

THE Enterprise Leadership for Transformation programme, first announced during the Budget in February, was launched...

[OTTAWA] Prime Minister Justin Trudeau on Tuesday told Canadians exhausted by the coronavirus that the pandemic "...