Lee Meixianleemx@sph.com.sg@LeeMeixianBT
Singapore developers sold 377 private homes - excluding executive condominium (EC) units - in February, a 28 per cent drop from the 524 units sold in January, as developers held back from launching new projects during the Chinese New Year festivities, amid a depleting inventory of units for sale in the market.
PHOTO: ST FILE

SINGAPORE developers sold 377 private homes - excluding executive condominium (EC) units - in February, a 28 per cent drop from the 524 units sold in January, as developers held back from launching new projects during the Chinese New Year festivities, amid a depleting inventory of units for sale in the market.

This was according to figures released by the Urban Redevelopment Authority on Thursday. 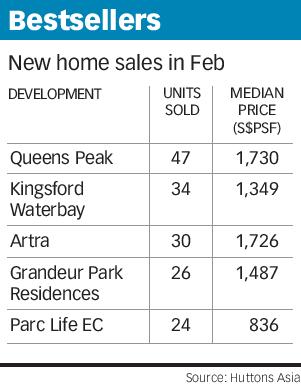 "So the low-key performance in February is not indicative of a market slowdown," he said. "Notwithstanding the festive period in February and the dearth of new launches, buyers were still house-hunting among previously launched projects, resulting in sales from these accounting for 98.4 per cent of total new private home sales during the month. This is indicative of ongoing interest among home buyers."

Developers are not idling in the background either. Tricia Song, research head for Singapore at Colliers International, noted that some have in fact started to raise prices at their previously launched projects, and are expected to continue to time their launches to benefit from a further recovery in residential prices.

This was due to an almost depleted supply of unsold EC units, said Mr Ong from JLL. "Excluding Rivercove Residences which is yet to be launched, there were only 212 unsold EC units in projects under marketing. This is only a small fraction of the 2,514 unsold EC units being marketed one year ago," he said.

Ismail Gafoor, CEO of PropNex Realty, believes the February lull will not last. "With more new launches lined up in the coming months, we can expect sales to pick up and transactions to increase, with the month of March witnessing approximately more than 500 units sold."

Mr Ismail expects home buyers and upgraders to move quickly to purchase existing stocks of available EC units especially before prices start to increase, as anticipated to after the government sold the Sumang Walk EC site to a City Developments joint venture at a record land price of S$583 psf per plot ratio, which could translate to a break-even cost of close to $1,000 psf for its completed units.

Upcoming launches in the next few months include The Tapestry at Tampines, The Enclave @ Holland, Rivercove Residences EC, Twin Vew at West Coast, Margaret Ville at Margaret Drive, Amber 45 in Marine Parade, and Park Colonial at Woodleigh Lane.

Ms Song from Colliers expects overall home prices to rise 5 per cent in 2018, in view of the abundant expected supply over the next three years. She also forecast developer sales to rise by 19 per cent year-on-year to 12,600 units excluding ECs, up from the 10,566 units sold in 2017.

Nicholas Mak, executive director of the ZACD Group, said that there are potentially more than 20 private residential projects with 12,500 units in total that could be launched in 2018.

"These projects are developed on either government land sales sites or en-bloc sale sites acquired by the developers. If the market sentiment continues to remain sanguine through the year, the primary market sales could range between 11,000 and 14,000 private housing units in 2018."

HONG Leong Asia has been granted a time extension by the Singapore Exchange (SGX) to release its FY2019 results by...