RESALE prices of condominiums and private apartments continued to appreciate month-on-month, according to the latest flash estimates from real estate portal SRX Property on Tuesday.

The values of non-landed private homes last month rose 0.4 per cent from the previous month, at the same pace as November's revised rate, said SRX. It had earlier estimated a month-on-month price rise of 0.5 per cent in November.

For the full year, resale prices of condos and private apartments have moved up by 6.2 per cent, SRX figures show. All locations saw price appreciation in 2017, with the CCR, RCR and OCR recording increases of 6.2 per cent, 8.9 per cent, and 4.4 per cent respectively.

Resale private non-landed prices are still down by 2.1 per cent from their last peak in January 2014, said SRX.

Condo and HDB rents down in June: SRX

Not surprisingly, given the year-end holiday and festive season in December, the number of resales fell by 38.3 per cent to 895 units in December from 1,450 in November.

Year-on-year, the resale volume last month was 79.7 per cent higher compared to 498 units moved in December 2016. 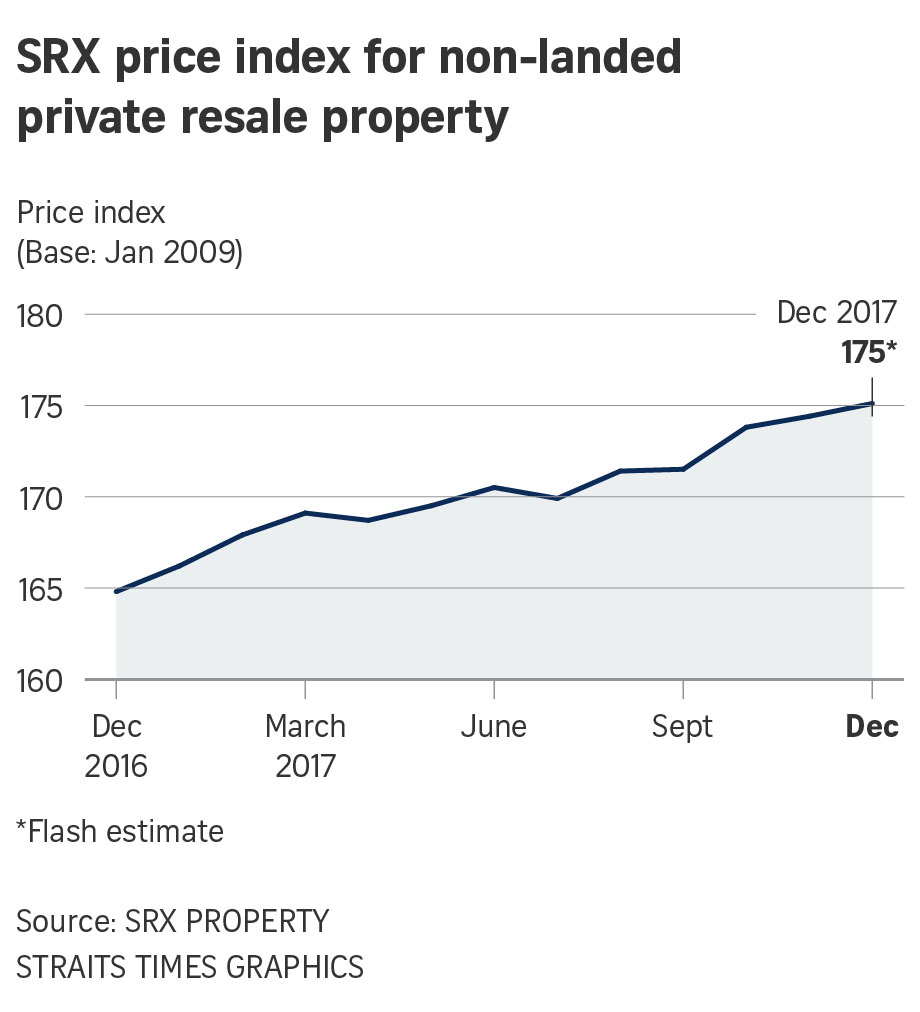 Analysts said the recent en bloc fever has likely pushed up private residential prices and transactions as cash-rich en bloc sellers look for replacement homes. The recovering economy and job market, plus the Government's tweak of its seller's stamp duty in March last year, also contributed to the steady upturn in the private property market.

Demand for communications assets on the rise

Rush for data centres, telecoms towers may be boon for telcos

Property developers have not seen the worst yet

THE Singapore Exchange (SGX) on Tuesday said it is "significantly expanding" its shelf of benchmark equity...

[WASHINGTON] US President Donald Trump said on Monday he is interested in hosting a Group of Seven summit in a "...

THE trustee of AIMS Apac Reit (AA Reit) on Aug 7 entered into a put and call option agreement with Titan (Wenya) to...