Reading between the lines

DEVELOPERS reported that they sold 602 private housing units in December - but the figure has turned out to be distorted because options for two-thirds of them were not exercised by the expiry date.

Lapsed options or "returned units" may be gaining pace following the July cooling measures and new launches begin to pile up, some market players say.

Typically, the holder of an option-to-purchase (OTP) - where the developer or seller grants a buyer the right to buy a property in return for a fee - has three weeks to exercise the option. If he fails to do so, the developer or issuer has the right to forfeit part of the deposit, which means buyers would be out of 1.25 per cent of the purchase price.

But with the market unlikely to roar back into life anytime soon, market players say developers have not been enforcing the forfeiture, but may instead be re-issuing OTPs upon the expiry of the original OTP upon mutual agreement.

Several market players told The Business Times that buyers were not backing out en masse, and in their experience, most reissued OTPs were eventually exercised. A real estate agent said that the practice isn't against current rules by the Controller of Housing, "as long as it's requested by the buyer and the developer is okay with it".

A myriad of reasons have been offered for such flexibility. Chia Ngiang Hong, City Developments Ltd's (CDL) group general manager, said that at Whistler Grand, 262 OTPs have been issued and "more than half have been exercised, with the rest progressively to be exercised."

He added: "As with most projects, OTPs typically lapse or were re-issued due to various reasons such as change of mind on the purchase, request for additional and/or deletion of name or change of unit. Moreover, when the recent property cooling measures took effect in July 2018, some homebuyers including HDB upgraders required more time to arrange their finances and loans."

Others add that in addition to giving buyers more time to sort out their financing, developers might also prefer to "lock-in" buyers rather than just forfeit their option fee.

Buyers, on the other hand, might be keen to snag new launches' "early bird pricing". Some could also be HDB upgraders who have not fulfilled their Minimum Occupancy Period (MOP) yet or owners trying to sell their first property before purchasing another.

If a buyer needs more time to exercise the OTP, the developer or the purchaser can also apply to the Controller of Housing for an extension of the validity period by up to eight weeks from the date of OTP. 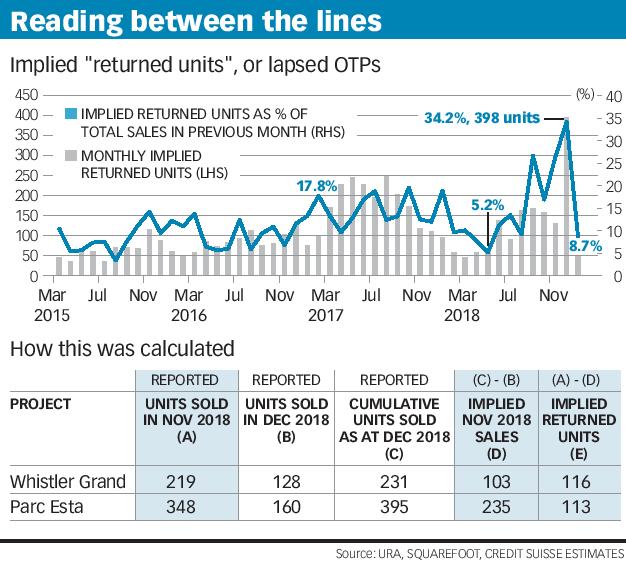 Beyond the two parties to the OTP contract, the accuracy in OTP data is crucial to the wider market as it is used to compute official numbers by the Urban Redevelopment Authority (URA).

In a bid to improve data accuracy, the URA has started to adjust its monthly data releases for the number of new private homes sold in the prior month. A URA spokesperson said in response to BT's queries: "Developers should only grant OTPs to purchasers who are ready to exercise them within the validity period. URA is monitoring the situation."

Prior to January this year, the monthly data release on the number of units developers sold the prior month (based on the number of issued OTPs) had not stripped out OTPs that had expired their validity period. They were only revised at the end of each quarter after accounting for how many OTPs were actually exercised by the buyer among other factors, and published as part of the URA's quarterly data release on the private housing market.

Analysts from Credit Suisse and Squarefoot Research calculated that for the month of December, there were 398 "implied returned units" (IRU) - a figure that several industry players said were conceptually equivalent to lapsed OTPs. That was the highest monthly figure in their research which goes back to March 2015.

Credit Suisse said in a February report that the IRUs had the effect of "weakening the usefulness" of the primary home sales data reported on a month-to-month basis: 602 units were reported to have been sold in December, but that included the 398 that were "returned".

When authorities adjusted downwards the Q4 figure for URA's new home sales figures reported previously for October, November and December, the revised figure for Q4 was a total of 1,836 - which is 469 units or 20.3 per cent fewer than the sum of the previously reported figures for the three months.

This was the largest such difference between quarterly figures and the corresponding monthly figures since at least Q3 2007, according to Credit Suisse's analysis. In particular, Credit Suisse found large numbers of "returned units" in December for CDL's Whistler Grand and MCL Land's Parc Esta, which were launched in late October and November respectively.

With the same calculation for each month since their launches in July, Credit Suisse also found that there were a total of 91, 179, and 171 "implied returned units" so far at Riverfront Residences, Park Colonial and Stirling Residences respectively.

The URA spokesperson told BT: "The difference between URA's monthly and quarterly developer sales' figures for Q4 2018 arose as adjustments were made to the latter to account for lapsed OTPs that were declared by developers to URA. We do this to ensure the data released is accurate. Towards this end, we have also started to make adjustments to the monthly developers' sales figures from January 2019."

URA's adjustments are a step towards achieving better data accuracy for the industry. But it is also worth asking what drove the spike in lapsed OTPs at the end of last year.

One possible reason floated by agents is developers' willingness to re-issue OTPs - which gave developers and sellers an extended "lock-in" and buyers more time to get their finances in order amid the cooling measures, especially the tightened loan-to-value ratio.

Credit Suisse suggested that since buyers could stand to forfeit about 1.25 per cent of the purchase price should they walk away, developers would have "effectively locked-in potential buyers who may not have been ready to commit to their purchase".

Apart from CDL, several developers whose projects were named in the report declined to comment on the record or did not respond to BT's queries as of press time. These included Oxley Holdings, Chip Eng Seng, MCL Land and Logan Property.

Credit Suisse's analysts wrote that their projection of flat property prices and the fact that buyers have paid up a booking fee means that he believes that "buyers would eventually exercise the re-issued OTPs.... However, any adverse macroeconomic shocks could be the key acid test for developers."

In that case, buyers would then become wary of big-ticket financial commitments, and if prices should decline substantially, buyers might decide it makes more sense to forfeit the 1.25 per cent option fee.

In such a worst-case scenario, this could have a knock-on effect on the rest of the market including agents' commissions and lawyers handling transactions, one executive at an agency pointed out.

But more crucially, it did have the effect of muddying home sales data. After all, as one put it: "If I report... 100 new home sales in a month, but if 50 per cent is going to be reissued over the next six months, then the true absorption rate is only 50 per cent."