URA's flash estimates show that the overall price increase was driven by condominium and apartment prices in the suburbs
Lee Meixianleemx@sph.com.sg@LeeMeixianBT
The private residential property index of the Urban Redevelopment Authority (URA) rose 0.5 per cent in Q3, compared to a 0.1 per cent dip in Q2.
FILE PHOTO

The private residential property index of the Urban Redevelopment Authority (URA) rose 0.5 per cent in Q3, compared to a 0.1 per cent dip in Q2. The index had fallen more than 11 per cent since Q3 2013.

Analysts had already anticipated the change in direction from tracking the higher sales volumes and transaction prices this year. The moderating decline in private home prices over the past quarters had also hinted at an imminent turnaround.

But is this increase sustainable? Will prices keep climbing, or will they flounder about for a few more quarters before settling in a decided direction? 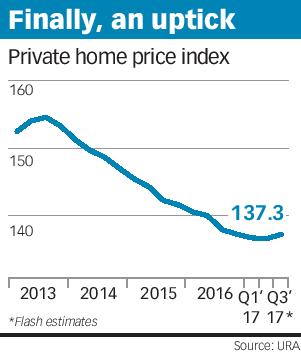 OCBC Investment Research senior investment analyst Eli Lee likens the price index to an object of inertia that, once set on an uptrend, will likely keep going in that direction.

"The market moves like a heavy tanker on the ocean. It's difficult to reverse course, and when it does, it stays on that path for some time."

He said he expects prices to inch up 1 per cent this year, and another 3 to 8 per cent next year.

Ong Teck Hui, national director for research and consultancy at JLL, also expects the overall index to continue rising in Q4. The whole of 2017 should register an increase of 0.5 per cent to 1 per cent, he said.

Next year, prices could go up by another 3 to 5 per cent, assuming the cooling measures remain and barring unforeseen adverse external events that may derail a recovery.

He believes the momentum will continue because the latest price increase shown in the index will reinforce buyers' and sellers' behaviours in a way that feeds back into the cycle to perpetuate the pattern.

"The buyers are moving in because of the perception that the market is bottoming out. This increase in the price index will reinforce buyers' belief even more that prices will start going up, and those that are still sitting on the fence may well get off it.

"And the sellers, knowing that the index is turning around, will stiffen or raise their asking prices even more, so this will perpetuate the whole thing."

On the other side of the debate is Desmond Sim, head of CBRE Research, Singapore and South-east Asia, who prefers not to jump the gun; he opts instead to wait for another quarter of data to confirm the trend, as he believes it is still too early to call it a rebound.

"Yes, it is an indication that the correction phase is possibly over, but we still need to collect more data points to call for growth in the market.

"The trough of the market has already hit us. We are expecting a longer, U-shaped recovery, which doesn't necessarily mean a straight flat line, but a hovering around 0 to 2 per cent for the next few quarters."

He expects a 0 to 2 per cent price increase for the whole of 2017, followed by a 2 to 10 per cent increase in 2018, with the higher end of the 2 to 10 per cent range a result of developers having to push up their prices in order to maintain their profit margins following their aggressive land bidding.

URA's flash estimates show that the overall price increase was driven by condominium and apartment prices in the suburbs, which rose 0.7 per cent; in the central region, they rose 0.2 per cent.

The prices of landed property rose 1 per cent in Q3.

The price changes by regions depend heavily on the launches and projects actively marketed in any given quarter.

Consultants believe that the performance of the suburban market could have been bolstered by positive sales at projects such as Le Quest in Bukit Batok, The Santorini in Tampines, North Park Residences in Yishun, Kingsford Waterbay in Upper Serangoon View and Grandeur Park Residences in Tanah Merah.

The price recovery in landed homes was likely due to the good response to Victoria Park Villas in the prime District 10.

JLL's Mr Ong said: "Landed home prices corrected the most in the last four years, with the landed index dropping 16 per cent between Q3 2013 and Q2 2017, while that for non-landed homes eased 10.2 per cent for the same period. There is a strong rebound in demand for landed properties as buyers try to capitalise on attractive prices."

According to URA Realis data, the approximately 16,000 private residential transactions (including new sales, resales and sub-sales but excluding executive condominiums) between January and August is about 54 per cent higher than in the corresponding period last year.

The flash estimates were compiled based on transaction prices given in contracts submitted for stamp duty payment and data on units sold by developers up till mid-September.

Statistics for the full quarter will be released on Oct 27.

[SINGAPORE] Changi Airport saw an 82.8 per cent drop in passenger traffic last year, according to statistics...

THE Place Holdings on Wednesday appointed a new chief strategy officer (CSO), who will be responsible for assisting...

DESPITE a second round of movement control order (MCO) restrictions across most of Malaysia in a bid to curb the...