ABSD rate raised 5 percentage points for Singaporeans and PRs buying second property and beyond; foreigners and entities also hit
Yunita Ongbtnews@sph.com.sg@YunitaOngBT
The scene at Riverfront Residences late on Thursday night. Home buyers had rushed there to put down deposits for units at the 99-year leasehold condominium in Hougang Avenue 7. They were hoping to do this before July 6, when the new ABSD rates would kick in.
BT PHOTO: NG SOR LUAN

HOMEBUYERS thronged the Park Colonial show suites on Thursday night to put down deposits for units as the developer hastily launched sales ahead of a planned July 14 launch date.

The scenario was similar at the sales offices of Riverfront Residences, the launch date for which was to have been this weekend, and also Stirling Residences, originally slated to be launched on July 14.

This drama played out barely an hour after the government announced fresh adjustments to the Additional Buyer's Stamp Duty (ABSD) rates and Loan-to-Value (LTV) limits on residential property purchases.

The changes kick in on July 6.

Aaron Wan, division director at Propnex Realty, described the situation as "chaotic" at Riverfront Residences. At least 1,000 buyers and agents were there at 11pm; most of the buyers being upgraders and investors, he reckoned.

The measures by the government, aimed at cooling the property market and keep price escalations in line with economic fundamentals, were to kick in the moment the clock struck 12.

The ABSD rates for Singaporeans and PRs buying their first residential property would remain at 0 per cent and 5 per cent respectively; but those buying their second or subsequent home would face a 5 percentage point increase in ABSD.

Foreigners buying any property would face a 20 per cent ABSD, up from the current 15 per cent. 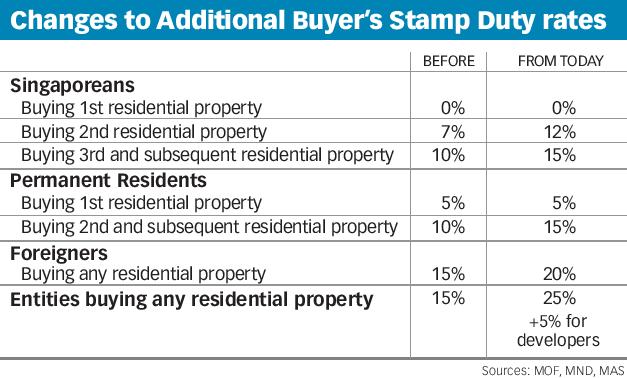 From Friday, loan-to-value (LTV) limits will also be tightened by five percentage points for all housing loans granted by financial institutions.

These revised LTV limits will apply to loans for residential property purchases where the option to purchase is granted on or after July 6. But they do not apply to loans granted by HDB.

Minister for National Development Lawrence Wong said in a statement: "The government has been monitoring the property market closely. We are very concerned that prices are running ahead of economic fundamentals.

"There is a large supply of units coming on stream and interest rates are going up. We want to avoid a severe correction later, which can have more destabilising consequences. Hence we are acting now to maintain a stable and sustainable property market." The Ministry of Finance, Ministry of National Development and the Monetary Authority of Singapore (MAS) announced the changes in a joint statement.

Dr Lee Nai Jia, senior director and head of research at Knight Frank, said buyer demand would certainly be dampened, and that this could lead to a 30 to 40 per cent fall in sales.

Prices could even drop to levels seen in the fourth quarter last year, he said.

But analysts said, given that the ABSD adjustments do not affect Singaporeans and PRs buying their first home, genuine home-buyer demand may not be as affected.

JLL's senior consultant Karamjit Singh said: "Developers will be concerned about how buyers react and the impact is likely to be felt the most for high-end properties - where foreigners and investors have the biggest presence."

But on the supply side, land acquisition would be hit, since developers have to pay a 5 per cent ABSD even if they finish selling all their units within five years, said Desmond Sim, head of research in Singapore and Southeast Asia for CBRE.

"It will bring up the cost of land acquisition, and will see a lot of second consideration when it comes to building developments with a large number of units," he said.

The collective sale fever will be adversely affected as the change adds to both the costs to developers and to sellers who need to buy replacement homes, said Nicholas Mak, executive director of ZACD Group.

Some property analysts wondered whether the measures might have been taken too hastily, given that prices have been rising only since the middle of last year.

But CIMB Private Bank economist Song Seng Wun said it was a sign of the government "trying to stay ahead of the curve". "If macrofundamentals were to weaken when the bulk of supply comes on stream, we could have a far bigger correction," he said.

"Given that they have the previous cycle to look back on, they are well aware of the risk that when sentiment takes hold, it can lead to very rapid price movement. They may not want to see prior cycles repeated."

He added that if this action does not take the steam off, policy-makers could also contemplate measures later on such as tightening lending to developers borrowing to purchase sites.

[DOHA] Qatar's sovereign wealth fund is looking east for deals in an effort to diversify an investment portfolio...

[MANILA] Philippines is now free of the highly pathogenic H5N6 bird flu virus, the Department of Agriculture said on...

[SYDNEY] The Australian and New Zealand dollars were firmer on Tuesday, as investor sentiment turned positive amidst...

Carrefour suitor has few regrets about a 'good deal' that failed