HDB resale prices dip 0.3% in June from May: SRX

Resale prices of Housing Board flats fell 0.3 per cent last month from May, according to flash data released by real estate portal SRX Property on Thursday.
PHOTO: ST FILE

RESALE prices of Housing Board flats fell 0.3 per cent last month from May, according to flash data released by real estate portal SRX Property on Thursday.

The data also showed that prices have fallen by 1.9 per cent from the same month last year, and by 13.3 per cent since the peak in April 2013.

The decline in prices for mature and non-mature flats were relatively similar, at 0.2 per cent and 0.4 per cent respectively.

Compared to the same time period last year, resale volume this June has increased by 13.4 per cent.

The overall median Transaction over X-Value (TOX) was negative S$1,000 last month. TOX measures how much a buyer is overpaying or underpaying on a property based on SRX Property's computer-generated market value.

Among HDB towns with more than 10 resale transactions last month, Tampines and Yishun had the highest positive median TOX values of S$5,000 and S$4,000 respectively. This suggests that a majority of buyers paid above the computer-generated market value for these flats.

On the other end of the spectrum, Bukit Panjang and Geylang had the lowest negative TOX values at S$7,000 and S$6,200. This suggests that most buyers purchased units under the computer-generated market value. 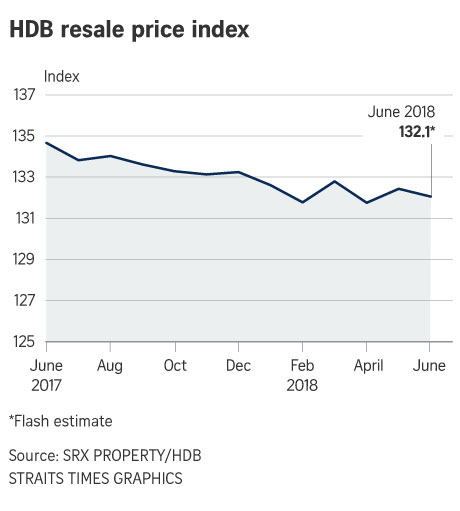 UK November house prices jump by most in nearly 6 years

[BRUSSELS] EU member states on Tuesday warned European negotiators not to lose their nerve in negotiations with...

US attorney general says no evidence of decisive election fraud

[WASHINGTON] US Attorney General Bill Barr said on Tuesday that the Justice Department has found no evidence of...

[Washington] Scientists at the University of Pennsylvania and the biotech firm Regeneron are investigating whether...

[BEIJING] China landed a probe on the Moon on Tuesday, said Beijing's space agency, which aims to bring back to...

[WASHINGTON] The US Justice Department said on Tuesday it had named an independent special counsel to continue...

Giuliani said to have discussed a pardon with Trump