Ann Williamsann@sph.com.sg
Resale prices of Housing Board (HDB) flats edged up 0.1 per cent last month, reversing the 0.1 per cent dip recorded in November, according to flash estimates from SRX Property on Thursday.
BT PHOTO: JAMIE KOH

[SINGAPORE] Resale prices of Housing Board (HDB) flats edged up 0.1 per cent last month, reversing the 0.1 per cent dip recorded in November, according to flash estimates from SRX Property on Thursday.

There was also a near 20 per cent drop in flats changing hands: 1,585 resale units were sold in December, 19.9 per cent fewer than in November. The drop, while in line with the property market's quieter year end, was bigger than December 2016's 14 per cent month-on-month sales decline, according to SRX figures.

With its latest monthly figures, SRX's full-year HDB resale price index is down 1.8 per cent, close to the 1.5 per cent full-year decline shown in HDB's official flash estimates released on Tuesday.

According to the HDB flash data, resale prices dipped 0.2 per cent in the final three months of 2017, while SRX's prelinary estimates show a 0.3 per cent slip. 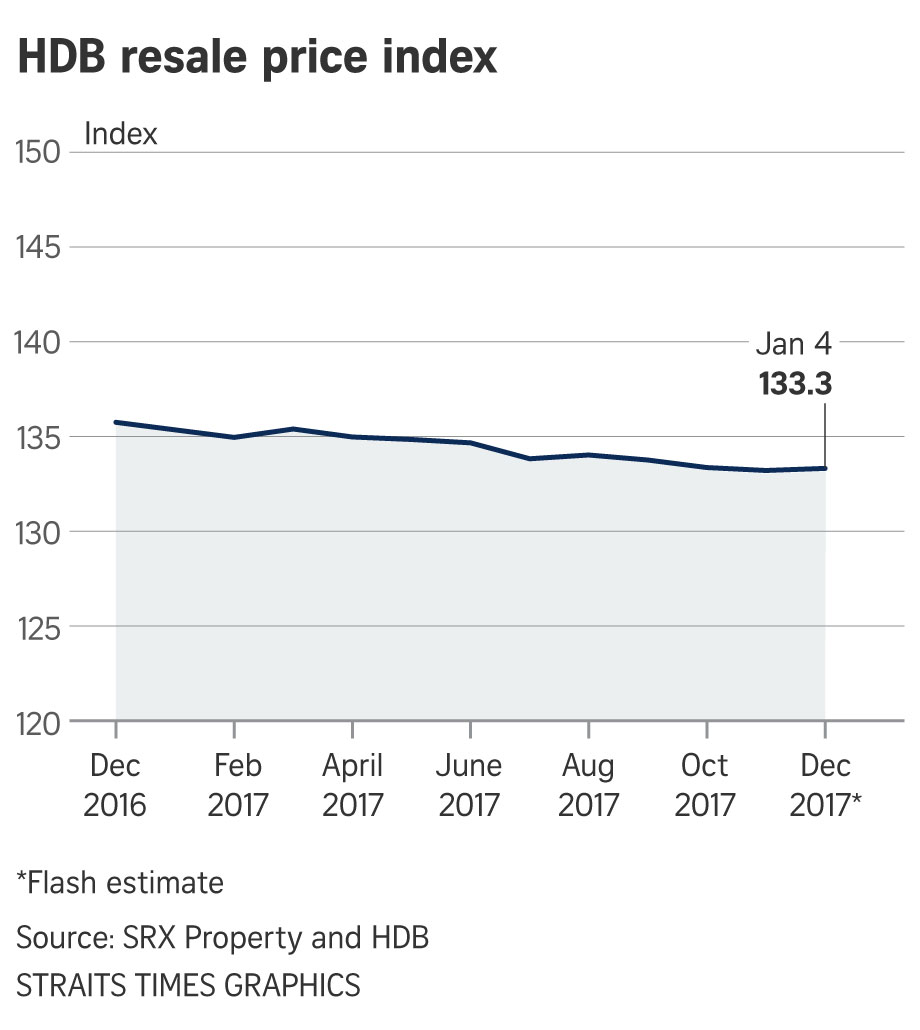 SRX is Singapore's only portal that publishes transaction data on a monthly basis.

According to its index, HDB resale prices have declined by 12.5 per cent since their peak in April 2013.

Contributing to the decline seen in the SRX full-year index was the price drop in mature estates, where the fall is 1.2 per cent year on year, compared with a 2.3 per cent increase in non-mature estates.

Month-on-month, the marginal price increase in December was not seen across all flat types. The resale prices of 3-room and executive flats rose by 0.2 per cent and 1.5 per cent respectively, while prices of 5-room flats remained unchanged and 4-room flats saw a 0.9 oer cent drop.

SIA freezes hiring for ground staff, mulls other measures in response to outbreak

SINGAPORE Airlines (SIA) has introduced a hiring freeze and is contemplating other cost-cutting measures amid the...

Dubai airport suspends flights with Iran, except for Teheran

[DUBAI] Dubai International Airport has suspended all flights to and from the Islamic republic of Iran, with the...

[SEOUL] South Korean stocks jumped 1 per cent on Tuesday as the spread of the coronavirus slowed in the nation and...

[BENGALURU] Gold prices fell on Tuesday as investors booked profits from a jump to a seven-year high in the previous...