Property agencies and valuers worry that its functions will make redundant the jobs of the already-dwindling pool of agents who represent buyers, as well as small valuation firms
Lee Meixianleemx@sph.com.sg@LeeMeixianBT
Real estate agencies and valuers see the start of digital disruption rocking the sector with the Housing and Development Board's (HDB) introduction of a new online resale portal that will substitute many of the current offline processes in a resale transaction.
PHOTO: LIANHE WANBAO

REAL estate agencies and valuers see the start of digital disruption rocking the sector with the Housing and Development Board's (HDB) introduction of a new online resale portal that will substitute many of the current offline processes in a resale transaction.

The public housing agency on Thursday said this portal would help to cut down buyers' and sellers' appointments required with HDB officers from two to one, and possibly halve transaction time from 16 weeks to eight. The portal will be launched on Jan 1, 2018.

While this spells greater convenience for home buyers and sellers, property agencies and valuers worry that its functions will make redundant the jobs of the already-dwindling pool of agents who represent buyers, as well as small valuation firms that do a lot of HDB resale valuations.

As young buyers become more tech-savvy, they are able to search for flats on their own, and the new portal now almost fully displaces the role of a buy-side agent, who usually handles the complex paperwork.

The number of do-it-yourself (DIY) buyers and sellers has shot up to 5,800 in the first half of 2017, compared to 9,900 for the whole of 2016. There are no separate figures for DIY buyers alone, but HDB acknowledges that this group is on a definite upclimb.

Furthermore, the introduction of the portal will also affect valuers because HDB will start calculating property values for buyers using technology and transaction data "to establish the reasonableness of the transacted price", for a processing fee of S$120.

Buyers obtain valuations of flats to assess how much of their CPF monies they can use or how large a housing loan they can take to finance their flat purchase.

HDB stops short of calling this "valuation work", which used to be done by its panel of 67 valuation firms, and quantified that where a valuation is needed, it will still be done. The industry, however, has read the message loud and clear.

Responding to the news, a spokeswoman from the Singapore Institute of Surveyors and Valuers (SISV) said: "The HDB's new process will have a greater impact on valuers who focus solely on valuation of resale HDB flats. For valuers who also carry out other types of valuations, such as valuation for public listing and real estate investment trusts, business valuation or intellectual property valuation, the impact will not be significant." 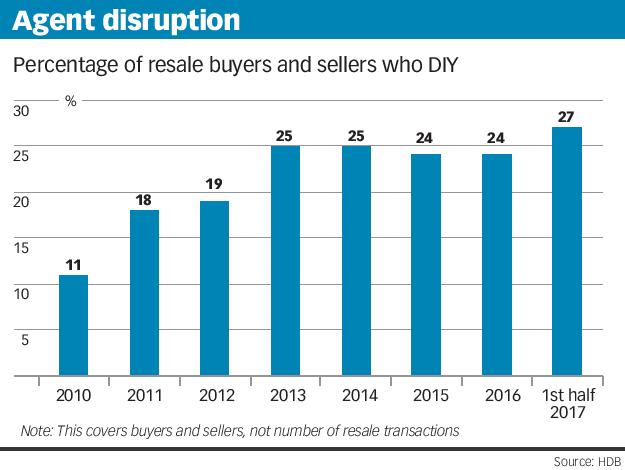 ERA Realty Network key executive officer Eugene Lim noted that of the current 67 firms on HDB's panel, about 10 are large-sized consultancies who do more commercial and private valuations. The majority, however, are small outfits, many of which are reliant on HDB resale valuations for business.

Interestingly, StreetSine Singapore last November took SISV to court for allegedly injuring its business and reputation by saying that the technology-based valuations it generates are "not considered valuations" according to SISV standards and guidelines.

On Monday this week, StreetSine took the case further by broadening its pool of defendants to include the council members of SISV's valuation division, as well as personnel from the valuation units of property consultancies Knight Frank, JLL, CBRE Teho, and Edmund Tie & Co after finding them to be allegedly colluding with SISV in hurting its business.

On Thursday, industry people read the government's endorsement of such computer-assisted valuations as a sign that it is taking the lead on digital disruption and acting on the plans in its Real Estate Industry Transformation Map proposed in March .

Some call this the "Uber-isation" of property valuation services - that is, the offering of quick and easy ways of assessing a property's value.

The next step is to see if banks will likewise accept such computerised valuations when disbursing loans, as most currently do not.

Ahead of the first appointment, buyers and sellers must also complete an online resale checklist, including checks on their eligibility and the available quota in the block or neighbourhood for the different ethnic groups and citizenships.

From next year, the new portal will integrate all the eligibility checks on a single platform. Using their SingPass, buyers and sellers can submit forms and conduct checks through the portal, thus eliminating the need for the first appointment and shortening the transaction time.

Once the resale application is submitted and approved, HDB will arrange an appointment for both parties to complete the deal by signing the necessary documents that require "wet-ink" signatures.

In his blog post on Thursday, National Development Minister Lawrence Wong noted that the portal will benefit real estate salespersons by freeing them up from time-consuming administrative work to focus on higher value-added work.

OrangeTee's managing director, Steven Tan, said: "Traditional players should be ready for digital disruption. The trade will be affected by digital platforms, whether from government or prop-tech and start-up companies. We should not be overly surprised by this move from HDB; it should be more or less expected," he said.

SEAFOOD supplier Oceanus Group has said that it is not aware of any information concerning the company that might...