Kalpana Rashiwalakalpana@sph.com.sg@KalpanaBT
The July cooling measures are starting to show in the moderation in the pace of the quarter-on-quarter increase of the official private home price index: Growth was 0.5 per cent in the third quarter.
PHOTO: ST FILE

THE July cooling measures are starting to show in the moderation in the pace of the quarter-on-quarter increase of the official private home price index: Growth was 0.5 per cent in the third quarter.

Most property consultants interpret the latest flash estimate from the Urban Redevelopment Authority (URA) as the beginning of a period of stable prices.

JLL national director Ong Teck Hui said: "The measures have arrested price increases in existing new projects, moderated new launch prices and tempered asking prices in the resale market as well. We can expect this trend to continue, with price increases remaining low key or flattening out in the next few quarters."

A minority say that a price decline might even set in as early as this quarter. A few said the key takeaway from Monday's numbers from the URA is that the market is "still strong".

The fate of private home prices will be determined by how opposing forces pan out. Factors weighing negatively include the cooling measures, the substantial supply pipeline, rising interest rates and the adverse impact on the economy from US-China trade tensions and rising oil prices. The uncertainty in the stock market is also not helping sentiment.

The factor cited most often by property consultants to support a positive take on private home prices is that developers are "locked" by the high prices they have paid for land acquisitions made in the last 18 months.

The 0.5 per cent q-o-q rise in the URA's overall private home price index, based on the Q3 flash estimates, comes after bigger hikes of 3.4 per cent in Q2 2018 and 3.9 per cent in the first three months of this year.

This is the fifth consecutive quarterly rise in the index, taking the increase from the recent trough in Q2 2017 to 9.6 per cent. This was, however, still 3.2 per cent shy of the Q3 2013 peak.

With a 7.9 per cent gain already chalked up since Q4 last year, most consultants expect an 8 to 10 per cent hike for full-year 2018. 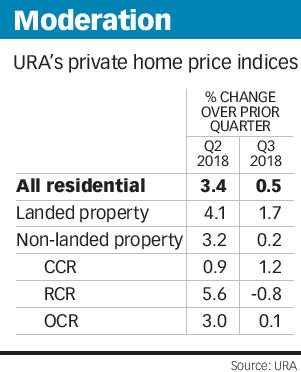 ZACD Group executive director Nicholas Mak is more bearish, forecasting a 6 to 8.5 per cent increase in the index because he factors in the possibility of a decline in Q4 2018.

"The main thing weighing down the market are the cooling measures, which may cause some sellers who are impatient to cut prices."

The huge supply pipeline will not start to bite just yet, as most developers still have some time before the five-year sales deadlines for their projects, he argues. This gives them some room to space out launches.

"Cutting prices is the last thing developers would want to do. Instead they will use other tactics - stepping up advertising and promotion, increasing sales incentives to agents."

Mr Mak expects sentiments to get weaker next year - meaning it is more likely that the URA private home price index will take a dip.

The URA's Q3 2018 flash estimates show that landed homes were the most resilient, with their prices rising 1.7 per cent quarter-on-quarter - although this was a slower gain than the 4.1 per cent hike in Q2.

Prices in the suburbs or Outside Central Region (OCR) inched up 0.1 per cent, after climbing 3 per cent in the previous quarter.

In the city fringe or Rest of Central Region (RCR), prices fell 0.8 per cent, contrasting with the 5.6 per cent jump in the previous quarter.

Colliers International head of research for Singapore Tricia Song attributes the decline to developers of selected projects clearing inventory at a discount, such as at The Poiz Residences, where 16 units were sold at a median price of S$1,320 psf in Q3. The Tre Ver, a new launch in RCR in Q3, also sold well at a lower-than-expected median price of S$1,553 psf.

JLL's Mr Ong said that pricing was driven largely by the primary market, which accounted for about 74 per cent of transactions in RCR.

Savills Singapore senior director of research and consultancy, Alan Cheong, was more upbeat, highlighting that the Q3 flash estimates were based on data from July 1 to mid-September. "We believe the 0.8 per cent price drop for RCR non-landed homes may be erased or reversed once datapoints from JadeScape near Marymount MRT station and Mayfair Gardens in Rifle Range Road are fed into the URA price model."

These projects were launched on Sept 22 and Sept 29 respectively. "From our hedonic model, they are higher than the Q2 2018 prices on a like-for-like project and location basis," he added. He went to describe the 0.5 per cent hike in URA's flash estimate as an "encouraging number". "The market is still strong. We believe that private residential prices will continue to vector up until the effect of positive sentiments has exhausted itself."