Consultants cite easing of prices and recovery of overall housing market for pickup
Kalpana Rashiwalakalpana@sph.com.sg@KalpanaBT
The number of landed residential property transactions spiked in the first 10 months of this year, putting the full-year number on track to be the best showing in five years.
PHOTO: ST FILE
Mr Tay: "To some extent, buyers seem to have returned to the market with a vengeance ..."

THE number of landed residential property transactions spiked in the first 10 months of this year, putting the full-year number on track to be the best showing in five years.

Property consultants attribute the surge in landed housing deals to the ongoing broader recovery in the residential market.

They also note that prices of landed properties have fallen to attractive levels from their peak in the third quarter 2013 to Q2 this year. This unleashed pent-up demand, with the strong buying activity leading to prices beginning to firm in Q3.

The number of landed homes sold between January and October reached 1,513 units, up 50 per cent from the 1,009 units sold in the year-ago period.

Savills Singapore's analysis of caveats data from URA Realis data downloaded on Tuesday showed that the value of transactions climbed 41.1 per cent to S$6.1 billion from S$4.3 billion.

The preliminary numbers for the first 10 months of 2017 have already surpassed last year's full-year showing of 1,187 units, sold at S$5.1 billion. The final transaction figures for January to October can be expected to be higher, as more caveats for October surface over the next few weeks.

Tay Kah Poh, executive director of residential sales and leasing at Knight Frank Singapore, said: "To some extent, buyers seem to have returned to the market with a vengeance, with sentiment buoyed by all the positive news about overall sales volume, record land prices, the influx of en bloc millionaires seeking replacement homes and improvements in the economy."

"The overextended downturn in the property cycle has unbottled pent-up demand for those wanting to buy a landed home."

Agreeing, Realstar Premier Group founder William Wong added that those who had been waiting on the sidelines for the past two years were now entering the market, ready to buy.

Mr Cheong highlighted that landed homes posted a bigger price decline than private apartments and condos over 15 quarters before prices turned up in Q3. This narrowed the price differential between the two categories, thus improving the attractiveness of landed homes for those with the means to buy them.

The strong buying activity is starting to have an impact on prices, as seen in the 1.2 per cent quarter-on-quarter rise in the price index for landed homes in Q3, which surpassed the 0.6 per cent gain in the non-landed index.

Mr Cheong noted that although the top 20 per cent of Singapore households had lower income growth between 2011 and 2016 than other categories of households, these more-well-off households nonetheless had an increase in income.

"Coupled with the sharper price declines for landed properties, it has meant that despite having the TDSR (total debt servicing ratio) framework in place, landed homes had become more affordable to the top echelons of society here."

Mr Wong of Realstar commented: "Most have found that with the market bottoming, the only way forward is for prices to pick up again." He said that landed property prices stabilised in July and August, and inched up 2 to 3 per cent in September and October.

"Prices should continue to rise by another 5 to 7 per cent by end-2018 for landed homes across all sectors," he predicted. "Some sellers have already adjusted prices upwards." 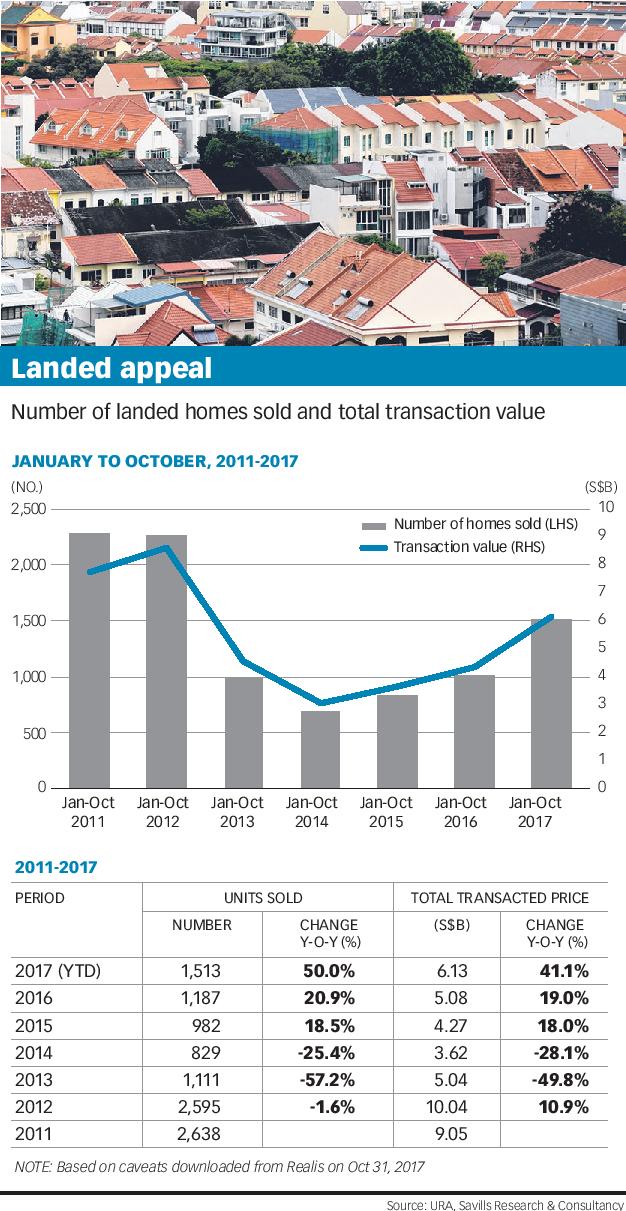 Knight Frank's Mr Tay noted that the bid-ask spread has risen in the past two to three months. "The mood has lifted, with vendors quick to raise prices, but buyers are still hesitant to match.

"Buyers are still mindful of the broader risks - interest rate hikes, questions about the sustainability of economic growth into 2018, labour market restructuring, property prices overshooting beyond what fundamentals can justify, etc."

He said he expects the upward sales and price momentum for landed homes to continue, but at a gradual pace.

Those buying landed homes are predominantly Singaporeans. A foreigner who wishes to own a landed home in Singapore must first seek government approval.

On mainland Singapore, buyers must at least be permanent residents (PRs); they also have to meet stringent criteria that point to significant economic contribution and rootedness in Singapore. Very few such approvals have been granted in recent years.

Off the mainland, Sentosa Cove is the only place in Singapore where non-PR foreigners may buy a landed home, although they are still subject to government approval.

Whether on the mainland or in Sentosa Cove, approved applicants may own just one landed residential property in Singapore, and that too, for owner occupation only, that is, they are not to rent out the property.

Realstar's Mr Wong said that land-hungry developers have responded to the buzz in the market by stepping up their purchases of landed properties.

Roxy-Pacific Holdings, for example, recently acquired four old bungalows in Guillemard Lane in separate transactions, but now plans to amalgamate the plots for redevelopment into a 97-unit high-rise apartment project.

In its analysis, Savills included caveats data for bungalows, semi-detached and terrace houses transacted in primary and secondary markets, but excluded en bloc sales of such properties. Also excluded were strata landed homes, which are low-rise landed residential properties that are akin to condominiums in that they do not come with land titles but are instead strata titled. They may also have shared facilities.

SINGAPORE should not let the the downturn erode its human capital, and should instead enhance it so that the country...

[NEW DELHI] Amazon.com is in early-stage talks to buy a stake worth at least US$2 billion in Indian mobile operator...