PRIVATE home prices are expected to remain flat or rise slightly this year, supported by a slew of new projects poised for launch.

After five straight quarters of growth, private residential prices dipped 0.1 per cent in the fourth quarter of 2018 over the preceeding three months, led by the softening in prices of the landed property segment. This followed a quarter-on-quarter increase of 0.5 per cent in the third quarter, in the wake of July's cooling measures.

According to the flash estimate provided by the Urban Redevelopment Authority (URA), the private residential property price index for 2018 as a whole rose 7.9 per cent, outpacing the 1.1 per cent increase in 2017.

Cushman & Wakefield estimates that property prices for last year would have actually grown by more than 10 per cent if not for the latest wave of cooling measures curtailing market exuberance.

This year, the private residential market will continue to be dominated by new sales as opposed to resale, analysts say, as developers will need to launch their projects given the five-year additional buyer's stamp duty (ABSD) deadline, as well as the upcoming supply from the flurry of en bloc sales.

But developers are unlikely to slash prices of new homes in upcoming launches as these land parcels were bought at "relatively high cost" during the recent collective sales cycle, said OrangeTee & Tie's head of research & consultancy Christine Sun.

Colliers International's head of research for Singapore, Tricia Song, estimates that overall private home prices could potentially edge up by 3 per cent this year, in line with economic growth.

She said: "For end-buyers, we think that market sentiment will likely maintain status quo in the first half of 2019 as the property curbs continue to moderate investment demand for private homes.

"Barring external shocks, the Singapore economy is expected to chug along steadily in 2019, and this should still drive owner-occupier and upgraders' demand, who are less or not affected by the curbs."

While developers may take a more cautious stance and pace out their launches, with the relatively healthy takeup since the property curbs, developers could be more active in land banking again by mid-year, she added.

Huttons Asia research head Lee Sze Teck pointed out that buyers will have plenty of options this year, with up to 19,000 units becoming ready for launch. "Out of these, it is estimated that 20 per cent are in the core central region (CCR), 30 per cent in the rest of central region (RCR) and the rest in outside central region (OCR)," he said. 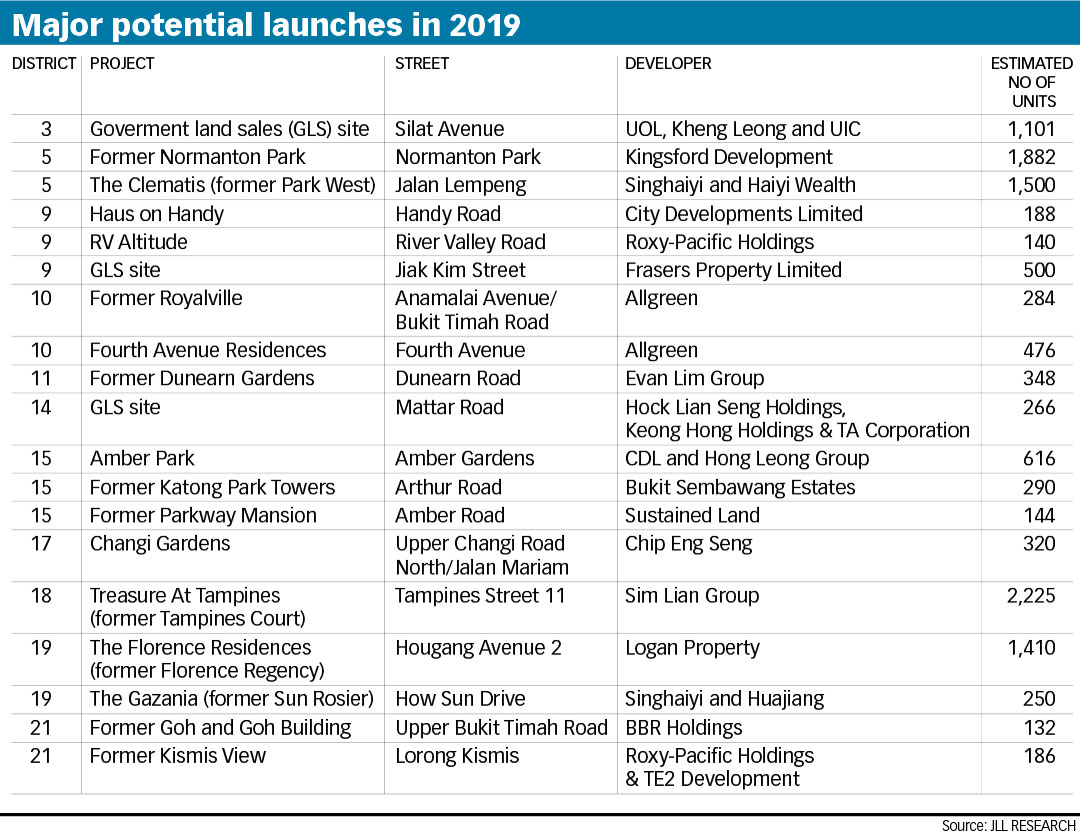 The list of projects include Fourth Avenue Residences, RV Altitude, One Meyer, 35 Gilstead and Fyve Derbyshire. He estimates that sales of new launches could range from 9,500 to 11,000 units this year, while prices may rise by up to 5 per cent.

Chief executive officer of PropNex Realty Ismail Gafoor expects overall growth of 1 to 2 per cent in private home prices this year, underpinned by demand from en bloc sellers and the higher land bids paid by developers.

ERA Realty's key executive officer Eugene Lim expects prices to hold steady, given the crop of new launches. Despite headwinds such as rising interest rates and the US-China trade conflict, he expects property prices to edge upwards by up to 2 per cent this year.

Meanwhile, senior director of research & consultancy at JLL Ong Teck Hui expects prices to flat-line with a downside bias this year, owing to the sizeable supply in the launch pipeline and a price-sensitive market.

In the fourth quarter, prices of landed homes fell 1.8 per cent over the previous quarter, URA data showed. This could be due to a higher base in Q3, when there was a 2.3 per cent increase, Ms Song said.

Prices of non-landed private homes inched up 0.3 per cent in the fourth quarter, after remaining flat in the previous quarter, propped up by a rebound in the RCR and OCR sub-markets.

Cushman & Wakefield's senior director and head of research, Christine Li, said: "The fall in CCR and landed prices point to a stronger cooling effect on properties which have a higher price quantum. Investors for high-end homes are expected to adopt a wait-and-see approach, as uncertainties in the global financial market have dampened sentiment somewhat. Recent cooling measures have also made it less attractive for foreigners to invest in Singapore residential in the near-term." She expects prices to languish in positive territory, at between 0-3 per cent this year.

In particular, reasonably-priced units units with a smaller overall quantum are likely to do well, which would give developers the edge to maintain or even slightly raise average prices, she added.

Giving a breakdown of non-landed private home prices by region, the URA said prices fell by 1.5 per cent in the CCR in the fourth quarter, versus a 1.3 per cent increase in the previous quarter. New project launches in the prime areas in Q418 included the 56-unit 10 Evelyn, the 96-unit 3 Cuscaden and the 77-unit 3 Orchard By-The-Park.

Prices in the city fringe or RCR increased by 1.8 per cent after a decrease of 1.3 per cent in the previous quarter. JLL noted that the RCR received the most number of new launches in Q4 2018, from projects such as Arena Residences, Kent Ridge Hill Residences, Parc Esta and The Woodleigh Residences.

Mr Ong said: "Sales were fairly healthy for these four projects, which managed to sell 50 to 77 per cent of their units launched in the first month of sales, at median prices ranging from S$1,699 to S$2,002 per square foot."

Meanwhile, prices in the suburbs or OCR edged up 0.8 per cent in Q4 after registering a 0.1 per cent dip in the previous quarter. Whistler Grand was the only new launch in the OCR, with 227 units snapped up at a median price of S$1,350 psf.

This year, there could be fewer launches in RCR than in 2018, though prices are expected to be relatively stable with significant stock still to be sold from projects such as Park Colonial, which has had steady sales, Colliers highlighted.

The OCR could see "some pricing pressure through 2019" owing to several big launches such as the 2,225-unit Treasure at Tampines and 1,410-unit The Florence Residences.

Still, prices of privates homes in all three segments - CCR, RCR and OCR - have just about rebounded to or even surpassed levels in Q2 of 2018, pointed out Ms Sun.

"(This) indicates that prices have stabilised five months after the property cooling measures." She expects overall prices to continue stabilising, but to rise at a slower pace of between 1 and 3 per cent this year.

URA will release its full set of updated real estate statistics for the fourth quarter on Jan 25.

Trump threatens to 'close down' social media after tweets tagged

[WASHINGTON] US President Donald Trump threatened Wednesday to shutter social media platforms after Twitter for the...

MAINBOARD-listed Chip Eng Seng announced late on Wednesday the termination of a contract-of-sale relating to the...

DPM Heng on GE: 'The sooner we get it done, the earlier we can rally everybody together'

[SINGAPORE] Singapore's economy faces significant long-term challenges that need to be dealt with over the next five...

Banks in Denmark may face a US$24b capital shortfall